Pay for Your Gas With This Stock

Rising gas prices got you down? Try this to make it through the dark winter.

Three weeks ago, I went on a long hike with my hound dog.

As I crossed paths with two other hikers, I overheard one of them saying, “My grandfather made all his money in stocks. I’m not sure which ones.”

I should have taken that as a forewarning, and I failed you, dear reader, by not mentioning it in these pages. But it’s been rolling around in my mind ever since.

It reminded me of the “shoeshine boy indicator,” which foretells a market bubble and coming crash. The story goes that in 1929, Joe Kennedy, JFK’s father, sat down to get a shoeshine, and when the shoeshine boy started talking about investing and even giving him stock tips, he knew it was time to get out of the market. Legend has it he immediately sold all his holdings and shorted the market, becoming a multimillionaire in the process.

The moral of the story is that when investing has become a pastime, with people who have no money to spare speculating in the market, it’s time to be wary. And we’ve seen as much lately with “meme” stocks and crypto.

That’s not to say this market's all doom and gloom, but the volatility is real, as the Dow entered correction territory last week.

But last week’s market correction was a sign of something that’s been building all along. We’ve seen a consistent downtrend the last few months, which could set the stage for a bear market this year.

The invasion of Ukraine was merely the catalyst and shows the frailty of some stocks.

Putin said, “Circumstances require us to take decisive and immediate action... Whoever would try to stop us and further create threats to our country, to our people, should know that Russia’s response will be immediate and lead you to such consequences that you have never faced in your history.” He further stated rather ominously that Russia is “one of the most powerful nuclear powers in the world.”

This leaves us in a state of heightened uncertainty, and Wall Street hates uncertainty. With the Ukraine invasion, gas prices increasing 40%, and a more than 7% inflation rate in the U.S., we're headed toward an energy crisis.

But if you’ve been reading us for any length of time, you know we here at the Outsider Club excel at finding backdoor ways to play major market trends.

So I want to give you two strategies today to play this crisis, one through oil and one through precious metals.

This first sneaky play can help you buy one tank of gas every month.

You see, if western countries impose stricter sanctions on Russian oil, the global oil supply will drop and drive prices higher. Germany’s already frozen the Nord Stream 2 natural gas pipeline, which has tightened the supply of natural gas. The Ukraine crisis drove crude oil prices above $100 a barrel here in the U.S., and prices soared more than 30% in Europe. Before the pandemic, Western Europe imported 40% of its oil from Russia. But the pandemic squeezed global oil supply, with not enough of it to meet demand. And as Russia’s the third-biggest exporter of oil, trade disputes will only drive the price higher. 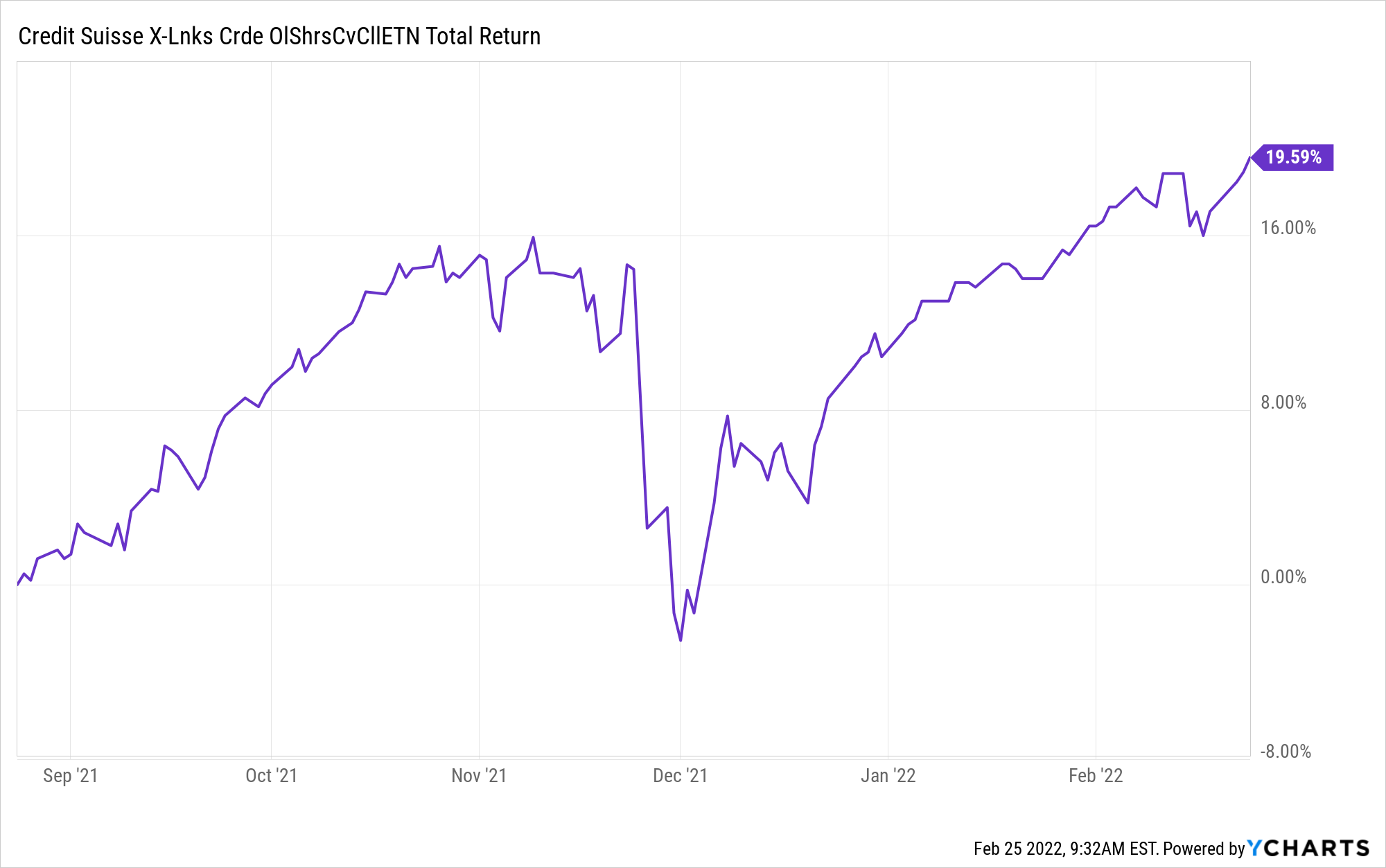 USOI gives you oil futures exposure without having to participate in that market yourself. It does so in two ways. First, it tracks the popular United States Oil ETF (NYSE: USO), but it adds a twist by selling covered calls 6% out of the money. If you’ve ever sold covered calls, you know that you receive a premium for doing so. This ETN accumulates revenue by selling covered calls, and it then distributes that money as dividends to shareholders every single month. 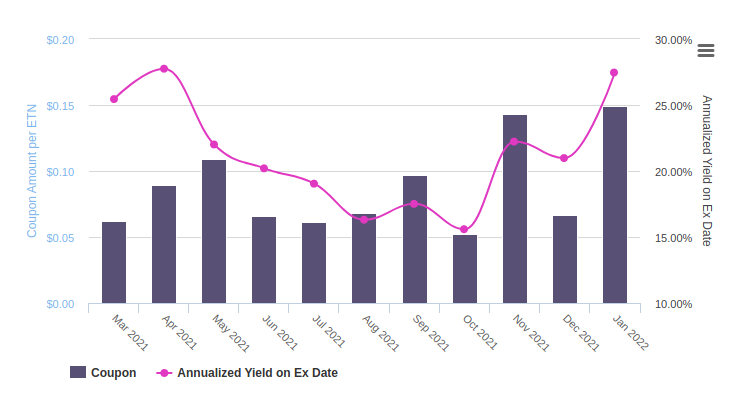 With February’s dividend payment of $0.17 a share, $1,500 worth of stock would have returned investors nearly $50 in dividends, a little more than the average $46.20 it costs to buy a tank of gas.

Let’s move on to the shiny metal.

Russia’s been called the Walmart of commodities, including crops, minerals, oil, and precious metals.

If the world stops trading with Russia, prices are only going to go higher. Obviously this is a developing story, and the situation can change at any moment, but needless to say, the world is spooked.

And when fear reigns, the safe-haven metal comes roaring back to life.

You surely saw the headlines last week about the rise of gold and silver...

The hard metals have since cooled off, and this volatility is exactly why I wouldn’t tell you to go out and buy gold.

But gold miners like Newmont (NYSE: NEM), Barrick (NYSE: GOLD), and Freeport-McMoRan (NYSE: FCX), among others, are steadily outperforming the market... 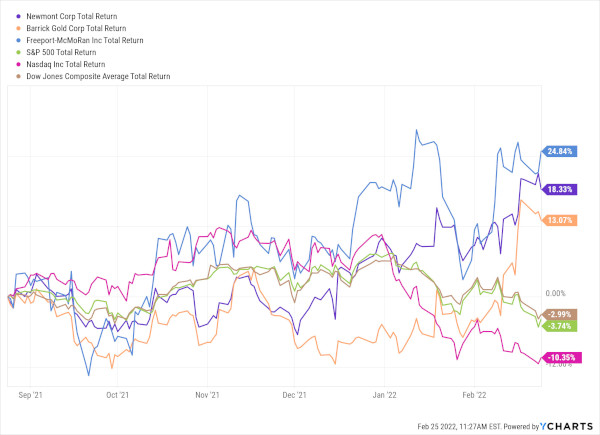 Experts are saying the greatest gold bull run in history is starting right now, but our mining and precious metals expert Luke Burgess says it’s going to be an even bigger bull market for the pick-and-shovel miners.

It’s already happening, as you can see above.

That's why Luke's giving Outsider Club members exclusive access to his latest research on the five best gold miners to play the trend.

So while Congress was taking a nap last week, we kept finding the best plays to secure your financial future.

As always, we thank you for your support, and let's hope for a peaceful end to this global crisis.