Own Coinbase Shares? You Need to See This...

Coinbase (NASDAQ: COIN) will go down in history as the fastest bankruptcy on Wall Street.

OK, maybe it won’t be that dramatic.

Afterall, Coinbase is the largest U.S. cryptocurrency exchange and the only publicly traded crypto company on the market, serving more than 8,000 institutional clients.

Well, consider this: The company’s been plagued with lawsuits, shady scandals, security issues, and shoddy fundamentals from the start. Also consider that you must believe in the long-term uptrend in crypto...

It may come as a surprise to you, but I’m a crypto bear.

Now, that doesn’t mean I can’t appreciate its money-making potential. I’ve been on the right side of the trade more times than not. And there are even ways to make money on crypto without buying and holding coins. I’ll explain that at another time...

I also truly believe in the reasons crypto was created. Afterall, in the last 10 years, the dollar has lost 17% of its purchasing power. The technology behind crypto — the blockchain — is what we’ll use in the future, not Dogecoin.

But I don’t like investments from which you can profit moving in only one direction.

So now that Coinbase is public, I see a tasty salmon, and I’m waiting for it with my mouth wide open as it swims upstream.

Flying Too Close to the Sun

Last week I talked about short squeezes and the massive upside potential if you’re on the long side of the trade.

However, the shorts are often correct in their bets; their timing just may be off, or an event may cause the stock they’re betting against to rise.

To recap, when the pandemic caused a short squeeze in Blue Apron (NYSE: APRN), 48% of its float (the number of shares available to the public) was sold short at the time.

And its share price has been steadily falling since its initial public offering (IPO) in April, down nearly 35% as of this writing. If you’d bet against the stock in April, you’d be printing more money than the Fed. 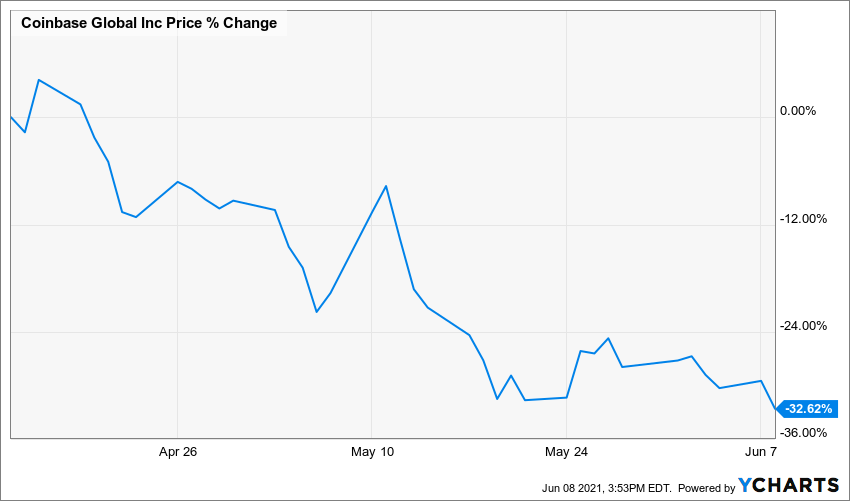 Keep in mind that some of this downtrend was likely caused by insider selling. In April, the SEC recorded 10 insider transactions — all sells — worth billions.

Seems like management cares only about lining their own pockets...

However, Armstrong — salaried at $1 million, with total compensation of more than $59 million when including stock options — needs to keep the momentum of Coinbase stock going in order to cash in on his options.

According to MSN, in August 2020 Armstrong was granted a multibillion-dollar performance award, given the stock trade at a certain price for a specific number of days. Needless to say, he’s still raking in the dough.

Aside from insider greed, there are three key areas I dislike about the company.

Management is young, inexperienced, and makes poor decisions, which has led to multiple lawsuits.

It’s been accused of and sued over the following:

Does management really care how well the company does? Does it even matter if the company goes bankrupt? I think not. Afterall, Armstrong joined the decabillionaire club this year.

Management doesn’t care about its customers in the slightest, which brings me to my next point...

For years, Coinbase has struggled with little to no customer support.

Thousands of users have complained of Coinbase locking their accounts and liquidating holdings, all with no warning from the company, causing investors to lose millions in opportunity cost. And when users reach out to customer service, they get a generic response or sometimes none at all.

This is no way to treat customers or run a business, and I think Coinbase will pay dearly for it now that it’s in the free market.

With so many investors angered, lawsuits filed, and lack of transparency from the company, Coinbase is doomed to fail unless it gets its act together.

You may be thinking it’s a profitable company, but its business model is perhaps the most unsustainable part of the company.

To buy and sell cryptos using the company’s service, you must pay a fee for each transaction. As it stands, 90% of revenue comes from transaction fees, while 10% comes from the sale of its own crypto assets to customers. (Can you say shady?)

It seems like a decent idea at first because as long as people are buying and selling cryptos, Coinbase makes money.

But what happens when people stop trading cryptos or prices tank?

Analysts at the Nasdaq, the exchange on which Coinbase is listed, are not optimistic...

The company had a stellar Q1 2021, with estimated revenues growing to $1.8 billion, with trading volume for the quarter rising to $335 billion as the price of Bitcoin almost doubled year to date, causing the number of active monthly traders to surge from 2.8 million at the end of last year to 6.1 million in Q1.

That said, it’s probably unrealistic to expect the company to maintain its Q1 growth rates for the rest of 2021, given the cyclical nature of the crypto market. Moreover, rising bond yields and a stellar 8x run in Bitcoin prices make the crypto market quite vulnerable to a correction in the near term.

This means the company’s revenues, monthly users, and total transaction values are directly dependent on the pricing of cryptos.

And it looks like Coinbase management is starting to realize the unsustainability of its business as it’s now scrambling to find new ways of keeping institutions interested in Bitcoin. In May, it launched a beta version of a “prime brokerage service” that will help firms trade and hold cryptos while providing data analytics.

I don’t see that taking off...

And, by the way, you can trade crypto on Robinhood for free, so why even use Coinbase?

We can also look to MicroStrategy (NASDAQ: MSTR), which last week announced it’s selling $500 million of corporate junk bonds to buy more Bitcoin, for proof that tying a business to Bitcoin is not good business. 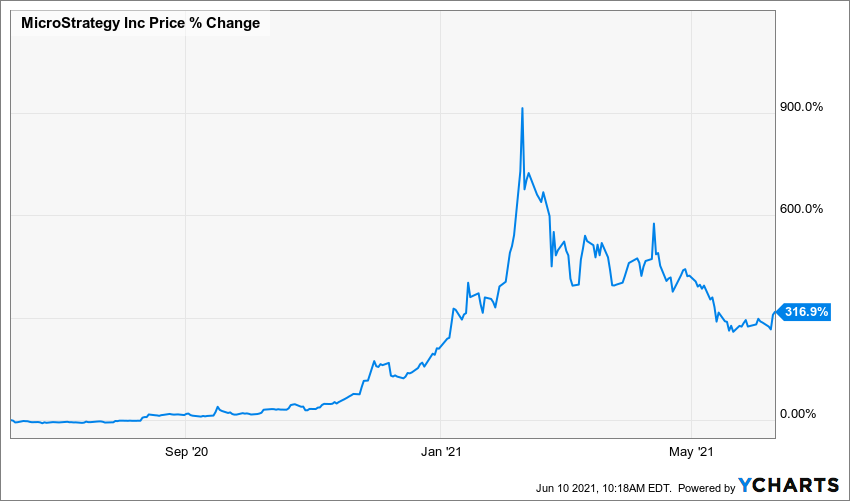 Sure, its share price has increased more than fourfold year over year, but it dropped dramatically after investors realized the uncertainty of the company’s investment. MicroStrategy has already spent $2.25 billion on the digital asset. That’s a big bet when a little goes a long way with Bitcoin.

The Future of Crypto

The recent plunge in Bitcoin has damaged its appeal when compared with more traditional assets.

Interestingly, Coinbase received its first “sell” rating last week from Raymond James. The firm argued the commission-based fee structure and security concerns will cause the stock to underperform.

But to top it all off, most analysts rate Coinbase a “buy.” And you know how we feel about those analysts...

I do believe cryptocurrency as we know it today will soon disappear, with most coins ultimately going the way of internet stocks of the early 2000s. So as with crypto, you may be able to make money with Coinbase on the way up, but I wouldn’t count on that trajectory forever. Make sure to stay nimble, diversify, and invest only what you're willing to lose in cryptos.

Unless Coinbase initiates a dividend, gets bought out, or spins off into another company, I’m not wasting my time on it.

P.S. We’re tracking three companies that we like better than Coinbase. The Wall Street hedge funds are betting billions against them, so now is the perfect time to get in before they get short squeezed. Just click here for everything you need to know.