One of the Best Buying Opportunities We Have Ever Seen

It’s the last quarter of the year, which for the past several years has meant tax-loss selling season is here to further depress already depressed share prices of our favorite juniors.

What’s different this year is the macro backdrop going into the next year.

The past month has seen a drop in volatility with stable stock and bond markets.

It’s the calm before the storm.

Last month, I told you about the liquidity concerns that the Fed tried to address when it announced it would inject $75 billion into the overnight repo market.

Things are so good that the Fed announced it would now be offering a minimum — minimum — of $120 billion.

Look at the chart below showing overnight repos since 2001. See that big red line to the right? That’s not normal. 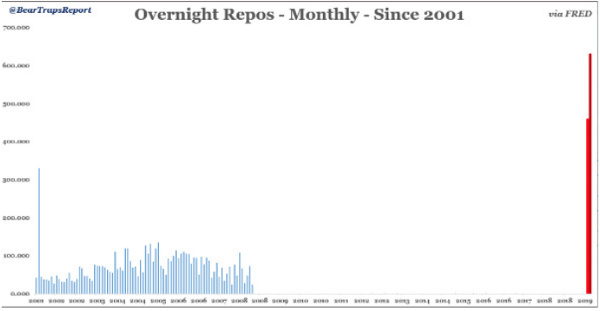 The amount offered for 14-day term repos has also been raised to $45 billion from $35 billion. 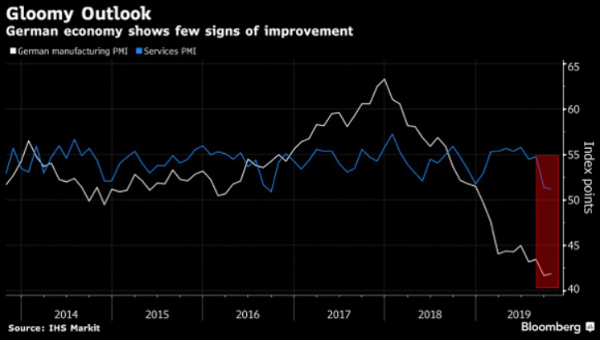 Factories remain weak. Employment in industry has fallen the most in 10 years.

Bloomberg Economics says the Eurozone economy probably expanded just 0.1% in the third quarter and may not improve much in the final three months of the year:

“Those figures are below our estimate of trend growth of between 0.3% to 0.4% a quarter. That means the pace of expansion will be insufficient to keep unemployment falling, pay packets thickening, and inflation climbing.”

Slower growth and rising unemployment aren’t the only problems for the Eurozone’s most productive economy. It also has serious liquidity issues to worry about.

Don’t just take it from me. Here it is from Europe’s largest money manager, Pascal Blanqué.

Amundi’s chief investment officer warned the asset management sector could be on the verge of a wider liquidity crisis as investors are starting to see the writing on the wall:

The chase for yield and lack of risk appetite is what led to the inverted yield curve a few months back. Capital is leaving the Eurozone and flowing into the U.S.

I explain all this so you can ask yourself a simple question: is the world getting more or less stable?

Because if we expect more volatility, schizophrenic monetary policy, and political impotence, then you can count on a higher gold price.

Speaking of gold, I’ve said repeatedly that I still believe we have another leg down. Gold has been extremely resilient but it appears a revisit of the $1,400 level is finally in the cards. This is healthy and necessary in order to get to the next leg up.

The junior miners — with few exceptions — continue to represent a generational opportunity.

The chart below is courtesy of Bloomberg & U.S. Global Investors. 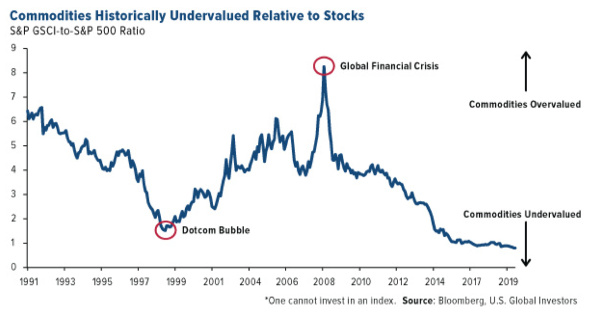 Materials are the most undervalued since 1991.

The trade war continues but there are signs that tensions are lessening as both China and the U.S. have been negatively affected by the prolonged tensions.

I shared the chart of Germany’s factory slowdown. 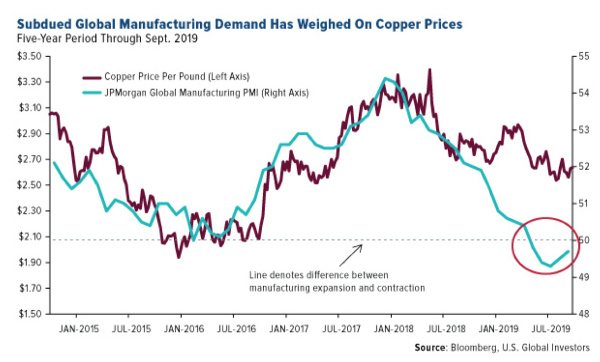 The global slowdown has affected demand for base metals that would otherwise be in a bull market. Metals like copper.

The common thread is a myriad of temporary factors that have all led to one of the best buying opportunities most have ever seen.

Tax-loss selling season, a lower gold price, a delay in Section 232 recommendations, I could go on. The opportunity is a temporary one. Take advantage of it.