When I started in this business 10 years ago, uranium was all the rage.

Uranium prices grudgingly moved down, sinking as far $42 before bouncing back up near $70. By the time 2011 came along, it’d found some stability around $60.

And then Fukushima happened.

The metal has languished ever since.

Still, that’s up from where uranium prices were a year ago, which was below $19.

So it’s actually come up a bit in the past year.

In fact, I think it’s fair to say we’ve bottomed out.

After all, uranium costs about $31 per pound to produce. That’s the global weighted average.

And typically, metals don’t trade below their production cost for very long. When they do, it disrupts production. Mines are closed, insolvent companies go out of business, exploration projects are shelved, and supplies go down.

Several years ago, there were 500 companies mining uranium. Today, there are just 20.

The uranium crash has removed 96% of suppliers from the market.

Now, 80% of the world's primary uranium supply comes from just 10 mines. And future global supply is dependent on just five newly proposed projects. Furthermore, opening a new uranium mine is not a simple or fast process. It takes a lot of time and effort. In fact, it can take up to 20 years to go from discovery to extraction.

That hasn't been a problem to this point, because the world has had adequate reserves to make up the difference. But 2016 marked a huge inflection point for the industry. It was the first year demand actually exceeded supplies. Going forward, such deficits will grow more frequent and more pronounced.

For that reason, uranium prices will rise over the next 10 years. They'll almost certainly double from their current level, rising above $50 per pound.

Some forecast models suggest a price of $70 or $80. And even those might be underestimating it. Because while uranium production has cratered, demand is rising.

On a global scale, we are on the verge of a nuclear renaissance. It would have come sooner, but the Fukushima disaster put a lot of plans on hold. But now, years later, they’ve been taken back up — mostly because policymakers realized they didn’t have any other options.

Remember, not every country is blessed with massive reserves of natural gas and coal. And the ones that are, are rethinking that model in light of climate change and life-threatening pollution.

Carbon emissions are no longer en vogue. They pose a serious risk to our health and our environment.

Problem is, green energy sources — such as solar, wind, and hydropower — aren't capable of carrying the load on their own. They're too expensive, and they simply don't have enough juice to power the planet.

Nuclear power is necessary. It's cheaper than alternative fuel sources, and it emits no carbon.

In that capacity, nuclear energy is actually good for the environment. I know it sounds crazy, but it's true.

Nuclear power has avoided the release of an estimated 56 gigatonnes of CO2 since 1971. That's almost two years of total global emissions at current rates.

It's also one of the cheapest forms of energy out there. 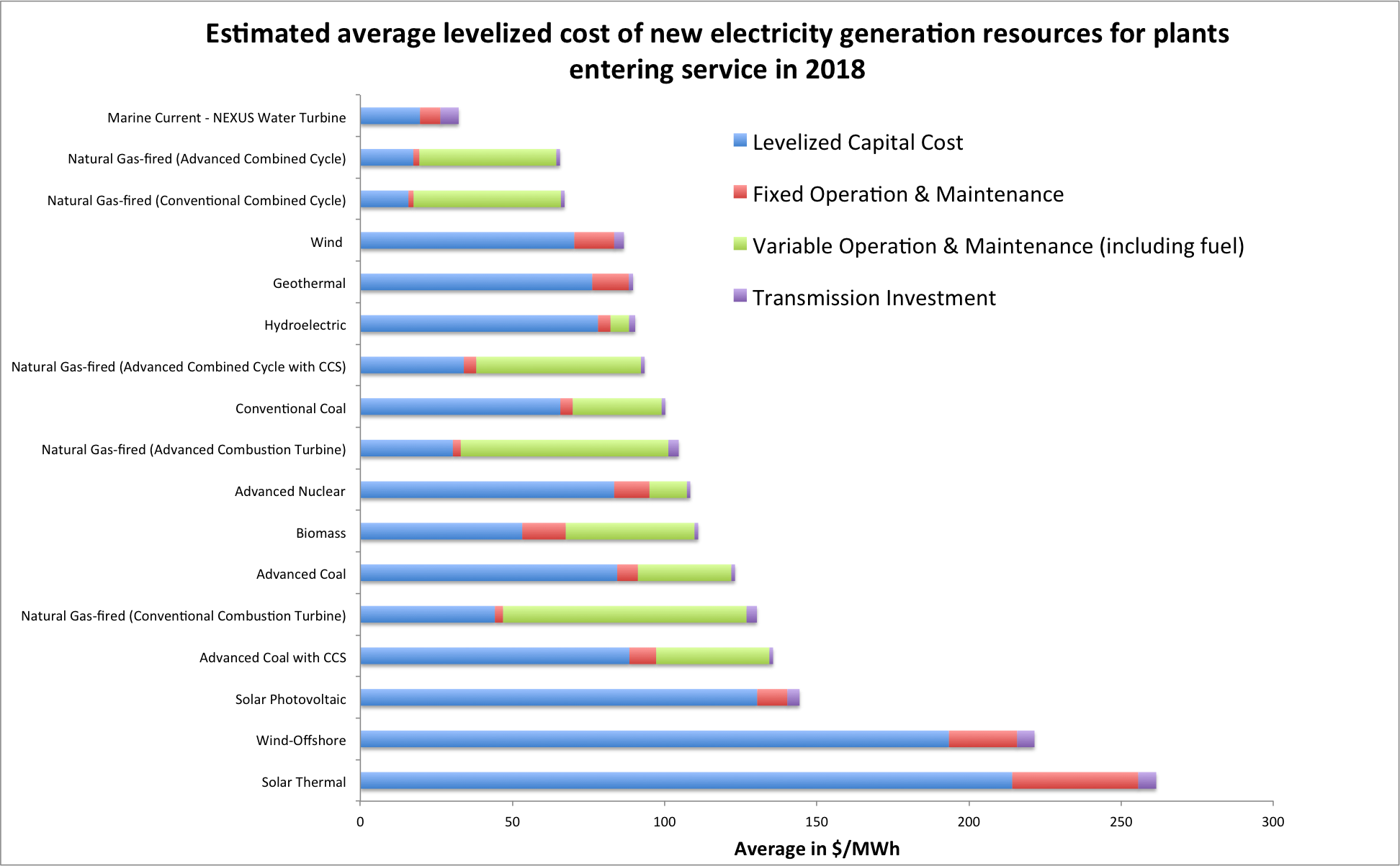 It's not quite as cheap as natural gas, but it's far more efficient than solar, wind, and even coal in terms of levelized cost.

That’s why so many countries, including the United States, continue to rely on nuclear power.

In all, more than a dozen countries get over 25% of their energy from nuclear power, with 437 nuclear reactors operating around the world. On top of that, there are another 50 reactors under construction, 165 planned, and 315 proposed.

China is the biggest driver by far.

It already has 38 reactors in operation, another 20 under construction, and more than 100 planned.

China will build 40 nuclear power plants in the next five years. It will have 58 gigawatts (GW) of capacity in full commercial operation by the end of 2020, up from 30.7 GW now.

When it's all said and done, Beijing will have spent a whopping $2.4 trillion to expand its nuclear power generation by 6,600%. 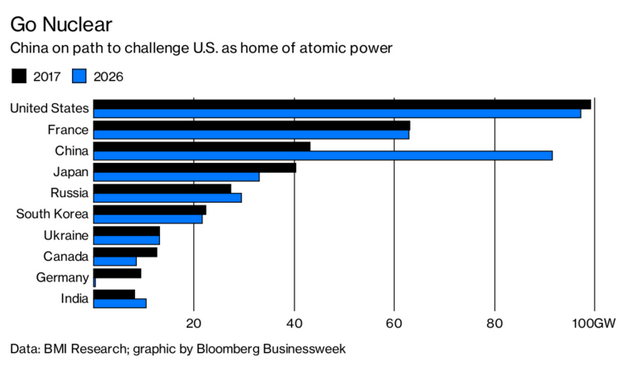 India is in a similar situation. It's pledged to grow its nuclear power capacity from 5,000 megawatts to 63,000 megawatts by 2030.

Russia aims to boost the share of electricity it gets from nuclear power to 25% in that time, up from 16% now.

Even Japan is restarting reactors.

As for the United States, nuclear energy provides 63% — nearly two-thirds! — of the country's carbon-free electricity. That's shocking when you consider nuclear power accounted for just 1% of the nation's electricity when Congress passed the Clean Air Act in 1970.

And guess what? That share is forecast to grow even further over the next decade.

In fact, Congress recently passed a $1.8 trillion Omnibus Appropriations Act. Tucked into that bill was $1 billion of funding for nuclear energy programs. That's a billion dollars earmarked for the development of new advanced reactors.

Donald Trump has proven to be a strong supporter of nuclear power as well.

Before he even took the oath of office, Trump sent a secret memo to the Energy Department asking how it could keep nuclear reactors “operating as part of the nation’s infrastructure” and what it could do to prevent nuclear plants from shutting down.

He asked the agency if the administration could resume the licensing proceedings for Yucca Mountain — a proposed nuclear waste site that was shelved by the Obama White House.

The memo asked about funding for both nuclear fusion projects and the Office of Civilian Radioactive Waste Management. And it offered to support the permitting of small modular reactors, which are seen as the next generation of nuclear technology.

Nuclear power isn’t something Trump talks much about publicly, but he does talk about it.

So going forward you can expect a lot more action from the Trump administration expanding the U.S. nuclear weapons and energy programs.

This is good news for the environment and nuclear power companies... But it's amazing news for uranium prices.

This nuclear renaissance, predictably, will lead to a sharp rise in uranium demand.

As a recent Morningstar report noted:

We expect global uranium demand to rise 40% by 2025. Annual growth of 2.8% might not sound like a lot, but is massive for a commodity that has seen precious little demand growth since the 1980s. Consider that average annual copper demand growth of less than 3% from 2002 to 2012 was enough to drive a 336% price increase.

Mined supply of uranium will struggle to keep pace amid rising demand and falling secondary supplies. Low uranium prices since Fukushima have left the project cupboard bare. We expect a cumulative supply deficit to emerge by 2021.

All of this is to say that uranium prices have bottomed and any investor with patience and foresight could make a really healthy investment right now.

There are a number of ways one could do that, but Nick Hodge has picked out the best. It’s a small company, not like Cameco or Areva. So it’ll only take a small investment and modest bump in uranium prices to send the stock soaring.

And you can find out more about that here.