New Silk Road Leads the Dollar to Its Death

Wielding some $16 billion, it figures to be the largest gold fund the world's ever seen.

And it's poised to support gold prices, tighten China's grip on the market, and expand the role of the yuan in global trade.

It has to be, because China's ultimate plan is to remake the current world order — an order defined by the United States and governed by the dollar.

That's no small goal. And it won't be achieved over night.

But piece-by-piece, the plan is unfolding.

The Silk Road Gold Fund will raise $16 billion (100 billion yuan). Shandong Gold Group will put up 35% of that sum and Shaanxi Gold Group will contribute 25%. The rest will come from private and retail investors.

Once the funds are gathered, China will start taking stakes in gold miners and gold mining projects.

This is all part of a much larger “New Silk Road” initiative, China unveiled last year. The goal is to recreate the route with complementary land and sea routes that form a loop connecting Asia, Africa, and Europe. 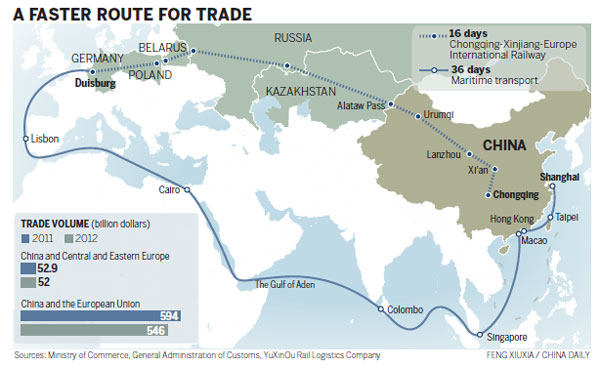 China envisions a vast network of roads, railways, and ports, as well as “capital convergence and currency integration.”

The country’s president, Xi Jinping, says the initiative (also known as the ‘One Belt, One Road’ plan) will help double the size of China’s economy over the next decade, bringing $2.5 trillion of additional trade for all those involved.

It's already made some headway.

China launched the New Silk Road initiative with a $1 billion electrical line in Central Asia and a $10 billion deep-water port in Crimea.

The gold fund is just the latest development.

Indeed, Central Asia is rich in resources. It has huge deposits of chromium, copper, zinc, and uranium, oil, gas, and of course, gold.

Kazakhstan produces around 22 tons of gold each year, a figure comparable to neighboring Kyrgyzstan, which produces 18 tons. And Uzbekistan is the world's seventh-largest producer, mining 102 tons per year.

China is both the largest producer and consumer of gold, playing a significant role in determining the overall direction of the gold market. This new fund, and the expansion of the Shanghai Gold Exchange, will further its clout — all to the end of marginalizing the dollar and expanding the role of the yuan.

Harness the Power of the XL Gold Cycle Today!

Join Outsider Club today for FREE. You'll learn how to take control of your finances, manage your own investments, and beat "the system" on your own terms. Become a member today, and get our latest free report: "Gold to ,000: The Power of the XL Gold Cycle." In it, you'll see a how a golden pattern has consistently created millionaires for the past 200 years!

Just by itself, the New Silk Road gives China a tremendous amount of economic leverage.

It effectively creates a massive trade network that totally excludes the United States. It also excludes the dollar.

That is, traditionally, China and its trading partners have had to convert their local currencies into dollars in order to trade. Every nation does. The dollar is used in about 80% of cross-border trade. That's what gives it its primacy.

But that's something China is working to change. It wants to use its currency, the yuan.

So for the past few years it's been orchestrating massive currency swaps with its partners.

In fact, China has signed currency swap deals worth 3 trillion yuan with 28 countries and regions including the EU. These deals let China trade and invest in foreign assets without U.S. dollars. They also expand the role of the yuan.

Then, there's the gold. China has been aggressively stockpiling gold for decades. It's also been rather secretive about its purchases.

Some suspect it may one day use the metal to back its currency. Others think it's looking to strengthen its bid to replace the dollar as the world's major reserve — either with yuans or Special Drawing Rights (SDRs). At the very least, it's working to make Shanghai the world's preeminent bullion trading hub.

Whatever the intent, it's bullish for gold. By investing in mining projects and loading up on bullion China is supporting gold prices.

Gold's been hammered by the recent resurgence of the dollar, but it's just about bottomed at this point.

If China succeeds in its ultimate objective, if the dollar's role in global trade shrinks, creating a huge glut of greenbacks, gold will soar to incredible heights.

Then, with the world's largest gold reserves, stakes in major mining operations spanning the continent, and trillions of yuan coursing through Asia and Europe, China will be firmly in charge.