New Budget Just Dropped... You'll to Want to See It

I knew the number was going to be big — but I didn't know how big.

But according to Bloomberg, President Biden plans to request $813.3 billion in national security spending — including $773 billion for the Pentagon — in the federal budget he sends to Congress on Monday, according to officials familiar with the plan.

That would be a $31 billion, 4% increase from approved spending for the current fiscal year and about $43 billion more than the White House budget office had projected a year ago.

We all know why.

Russia's invasion of Ukraine has crystalized what I've been saying for years, which is that we're entering a new era of chaos, disruption, and disorder. It's one where America's strength and influence will be continually challenged and it's going to take a lot to maintain it — if in fact we can.

For decades, Vladimir Putin has been working painstakingly to restore the Soviet Union. And now the subtext has become text. He's sacrificed thousands of Russian lives, the viability of his country's entire economy, and potentially his own fortune to that end.

To what extent he succeeds in that endeavor remains to be seen. So far, it's been limited, but it's also difficult to see him reversing course or giving up.

Instead it seems more likely that he'll stoop lower and resort to more desperate measures to achieve his aims. That could mean using chemical or even nuclear weapons. And that could ultimately lead to a real military response from NATO.

Furthermore, even if Putin is thwarted we'd still be faced with rising challenges from China and rogue states around the globe (North Korea and Iran, for instance).

With that, the window of the great peace that's lasted since the end of the Cold War has come to an end. And the era of de-escalation, arms-control treaties, and international order has been superseded by a new era of conflict and arms races.

A lot of conspiracy theorists perked up when Joe Biden used the phrase "new world order" to describe it, but this is what he was talking about.

And so the largest defense budget in history is poised to grow larger still, with more than $800 billion flowing into the Department of Defense, the Energy Department that manages our nuclear program, and intelligence agencies like the NSA, FBI, and CIA.

The request will include $130.1 billion for research and development of cutting-edge war-fighting technology like hypersonic missiles and artificial intelligence. That’s $15.6 billion more than the budget office had projected last year, but entirely necessary if we're going to close the technological gap.

Indeed, even as Russia's invasion has devolved into an ugly quagmire, the country still debuted its hypersonic weaponry on the battlefield when it fired a Kinzhal missile into an underground ammunition depot, marking the first time such weapons have ever been deployed.

The Biden administration will fund more traditional weapons requests too, of course, with $146 billion ($9.4 billion more than projected last year) earmarked for procurement.

Coincidentally, this budget also leaked just as Biden began a multiday meeting with other NATO leaders to discuss new measures the group can take to support Ukraine, more sanctions to punish Russia, and the terrifying prospect of chemical, biological, or nuclear weapons being deployed.

Obviously, countries throughout Europe have been unsettled by Russia's actions and roused to action, as well.

That's translated into a huge bump in defense spending among countries that haven't traditionally focused their resources on the military.

Prompted by Russia's annexation of Crimea in 2014 and some brow-beating from former president Donald Trump, 2021 already marked the seventh consecutive year of increased defense spending among NATO allies, with 11 members of the group meeting their defense budget target of 2% of GDP, up from just three in 2014. 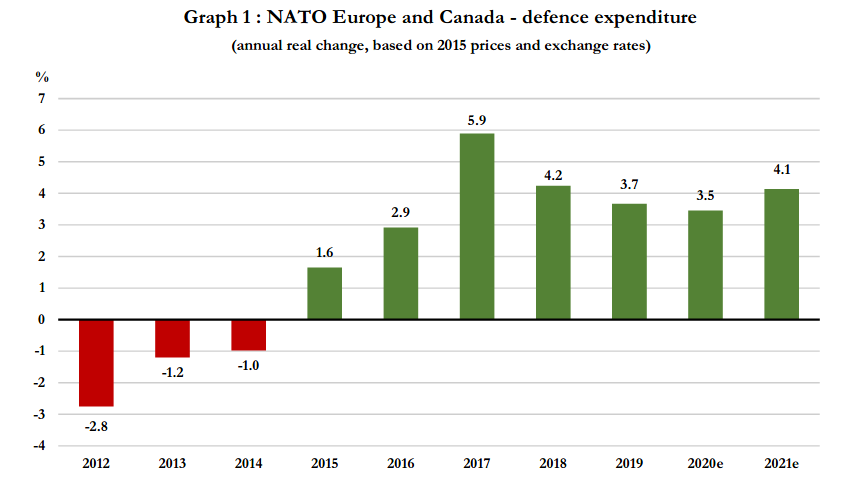 And now, with Putin's intentions fully exposed, 2022 figures to be an even bigger year for defense spending for NATO and non-NATO nations alike.

Again, all of this spending will provide a huge tailwind for defense contractors like Lockheed Martin and Northrop Grumman — both of which are in my Wall Street's Proving Ground portfolio.

But as you've probably heard I just launched a brand-new service.

Called Secret Stock Files, I'm going to be digging deeper into "Black Budget" government programs and cutting-edge military technologies to find more obscure investment plays. I'm also filming monthly webisodes in which I talk about those findings. I've already filmed the first one and I just penned the script for the second episode that will premier in April.

So if you want to hear more about this stuff, you can do that here.

You can now receive issue and trade alerts sent to your phone via text. Simply log in to your account, by clicking here, to activate text alerts for the services you subscribe to. Click the “Alerts” tab at the top of the page after you log in and follow the easy instructions. Or call our customer support team toll-free at 1-855-496-0830 to help you sign up.