Money goes where it is treated best.

That’s not a hard concept to grasp.

For the past 10 years, that has been in global equities. But that is now changing.

After the financial crisis in 2008, global stocks began to soar because of central bank interventions that included things like interest rate cuts and quantitative easing.

You remember quantitative easing, right? That’s where central bankers huddle around a cauldron and create money out of thin air to buy stocks and bonds.

Anyone with common sense knew it was going to end badly. But it has taken longer than anyone thought. 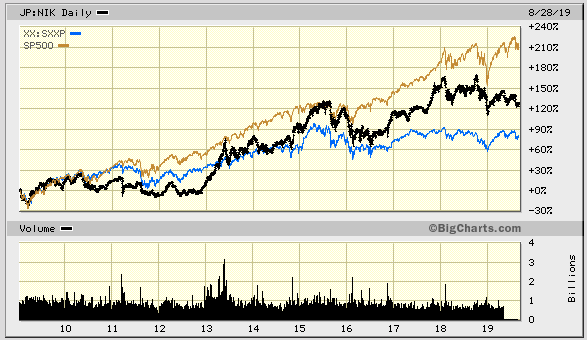 Japan and Europe were able to stave off the inevitable until 2015. Their stock markets are lower now than they were then — four years, no gains.

Money that was in those stock markets then went into U.S. stocks, which is why the S&P 500 and Dow Jones Industrial Average were able to make new highs in 2018 and 2019. The U.S. central bank — the Federal Reserve — was the only one with room to cut rates and the U.S. economy was “strong” relative to the others around the world.

But the ability for the U.S. to remain buoyant is waning.

Central banks around the world have cut interest rates so much that bonds are now negative in several major economies including Japan and Germany, which is the strongest economy in Europe.

Investors now fear the same fate for the U.S.

The Federal Funds rate is already at a historically low 2.25% and President Trump is breathing down Fed Chair Jerome Powell’s neck to lower it by a full percentage point while reinstating cauldron huddling. Meanwhile, the U.S. economy is slowing because of natural cycles and the trade war isn't helping.

This isn’t about the U.S. dollar. It is strong and can continue to be. This is about interest rates.

It is going to go where it’s treated best: into U.S. stocks (for now) and gold. 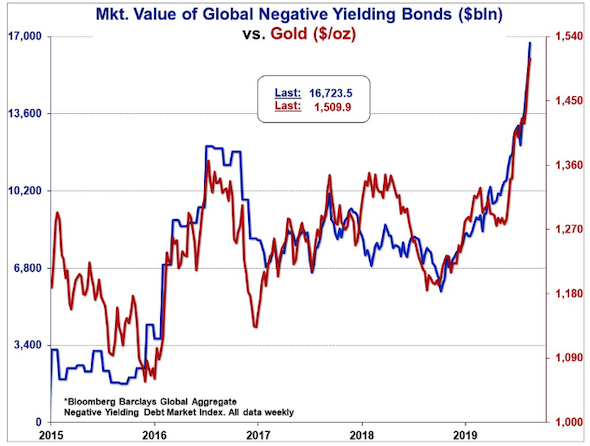 Record gold prices will be coming to a dollar near you soon.

Buy gold stocks and have a great recession.

The Fed’s Been Compromised – Buy Cryptos
The U.S. unemployment rate is 3.6%. That’s the lowest it’s been since 1969. GDP is growing consistently over 2% per year. And inflation is fully contained, checking in at 2%, which is the Federal Reserve’s self-appointed target. Why then is the central bank signaling a rate cut?
The Fed Can’t Save You
The U.S. unemployment rate is 3.8% and the U.S. economy hasn’t contracted since the first quarter of 2014. And yet the Federal Reserve is gearing up for a rate cut. That shouldn’t excite you — it should scare you.
New Silk Road Leads the Dollar to Its Death
It's called the "Silk Road Gold Fund." Wielding some $16 billion, it figures to be the largest gold fund the world's ever seen.
Negative Interest Rates: An Abomination That Makes a Lot of Sense
As long as lending demand is low, wealth with few worthwhile places to park it is plentiful, and central bank intervention is sky-high, negative rates make perfect sense. Outsider Club editor Adam English explains why...
Investing in Marijuana Without Getting Burned
The marijuana industry has rewarded scores of investors with life-changing gains.