It’s been decades in the making.

China and the United States have been on a collision course for 70 years — one that’s been steadily accelerating over the past two decades.

Two powers — one established (if not descending) and one aspiring — circling and testing each other until ultimately the subtext becomes text and the cold war suddenly turns hot.

Even if that tension is just simmering, it’s ever present. And in the past few weeks, it’s really come to boil because Nancy Pelosi has been very publicly toying with a potential visit to Taiwan.

Now, I can’t even begin to tell you how irresponsible and asinine this is.

What does Nancy Pelosi think she’s going to achieve there?

Perhaps the most abhorrent icon of America’s gerontocracy, Pelosi never does anything that isn’t profoundly self-serving and garishly self-aggrandizing. 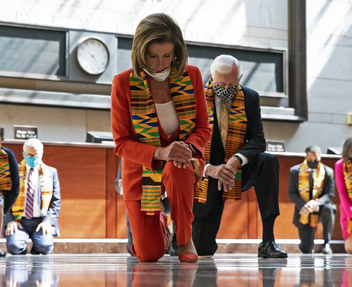 There is no point to this visit. Its motivation is painfully transparent.

It’s simply an effort to distract from her party’s inability to govern. It’s a sideshow stealing bandwidth from high inflation, a flagging economy, unaffordable homes, deepening climate crises, and other serious issues that are far more pressing.

The only thing that could possibly come of it is a photograph she can hang on her wall and point to in lieu of actual accomplishments.

That, and of course, the most deadly and disruptive military conflict since World War II.

And that’s where we’re headed.

Because China is furious about this. And it’s not just mock outrage. It’s real. China takes this kind of thing very seriously.

That’s really pushing it, especially since Joe Biden ratcheted tensions higher just a few months ago when he said the United States would use force to defend Taiwan if necessary.

That, too, upended U.S. diplomatic precedent.

And earlier this month, a group of six U.S. senators traveled to Taipei, further inflaming tensions.

Also in July, the State Department approved the sale of $108 million in military assistance to Taiwan.

It’s not hard to see why China would view these acts as provocative.

And they’re certainly something President Xi Jinping would like to dissuade.

The response has reflected that.

If the U.S. side obstinately clings to this course, China will definitely take resolute and forceful measures to firmly defend its national sovereignty and territorial integrity. The United States must be fully responsible for all the consequences caused by this.

Now, in the past, it was easier to dismiss this kind of rhetoric as saber rattling. But that’s just not the case anymore.

China is simply too powerful — economically, politically, and militarily — to not take seriously.

He went on to say:

It’s clear the Chinese are developing the capabilities in all the domains in space and cyber but also the traditional domains of land, sea and air to conduct a cross-channel attack, an invasion, if you will, to seize the island of Taiwan if they made the political decision to do so.

Beijing has also made its displeasure known through shows of force and hostile acts.

And Secretary of Defense Lloyd Austin noted that there had been an "alarming increase" in unsafe intercepts of U.S. and partner force aircraft.

That assertion was corroborated by Canada and Australia, which say Chinese jets have been performing "dangerous" intercepts against aircraft carrying out routine missions. They even released  a “bundle of chaff” containing small pieces of aluminum that went into one of the aircraft’s engine.

Now there are fears that China will declare a no-fly zone over Taiwan to prevent the trip entirely.

And the most hawkish members of the Chinese commentariat are encouraging the military to shoot down Pelosi’s plane, should it arrive.

“If the U.S. can’t restrain her, let China restrain her & punish her,” Hu Xijin, the retired editor of the state-backed newspaper Global Times tweeted. “[The Chinese] Air Force will surely make her visit a disgrace to herself and to the U.S.”

Again, you can attribute all this to bluster — a high-stakes game of chicken.

But as we go on and these conflicts get more and more heated, it’s going to eventually become clear that they’re not bluffing.

China is going to attempt to fulfill its own version of Manifest Destiny and recapture the island that Xi Jinping and others believe is rightfully theirs.

In fact, last month on the Angel Research Podcast, I was asked specifically about China’s policy toward Taiwan — how likely it was that it would invade, when such an invasion might take place, and what the immediate aftermath might look like.

You can watch that interview and see my responses in their entirety here.

But the bottom line is that China is likely to make its move on Taiwan swiftly (just as it did on Hong Kong) and sooner rather than later.

Provocations like these will only draw that inevitability closer to fruition.

This isn’t a new threat — it’s just one that’s come closer than ever to becoming a reality.

And that’s one of the many reasons I recently launched a stock trading service that specializes in tracking the defense industry through government disclosures, patent filings, and insider contacts.

Make sure to check it out if you haven't already.