On May 17, 1792, 24 stockbrokers and merchants gathered under a buttonwood tree outside 68 Wall Street to sign the Buttonwood Agreement, a document that would set the foundation for the New York Stock Exchange as we know it today.

Revered as one of the most influential financial documents in history, the Buttonwood Agreement sought to stabilize the securities market after the Panic of 1792, a two-month financial credit crisis when prices of U.S. debt securities and bank stocks fell, eventually resulting in a bank run (when people withdraw their money from banks en masse).

The agreement proposed the creation of a system where brokers and merchants would trade only with each other and for a set commission per transaction. The contents of the document are short but sweet:

We the Subscribers, Brokers for the Purchase and Sale of the Public Stock, do hereby solemnly promise and pledge ourselves to each other, that we will not buy or sell from this day for any person whatsoever, any kind of Public Stock, at a less rate than one quarter percent Commission on the Specie value and that we will give preference to each other in our Negotiations. In Testimony whereof we have set our hands this 17th day of May at New York, 1792.

By creating a membership-only exchange, the signers effectively set up the beginnings of an investment community that we now refer to as Wall Street...

Of the 24 signers, one name stands out for me... Bleecker, my grandmother’s maiden name. Two Bleeckers spilled their ink on the Buttonwood Agreement.

My grandmother was the last Bleecker in her line, but my uncle, who calls himself an amateur genealogist — he’s being modest — has done much research on this. So here’s what we know.

Anthony Lispenard Bleecker, the namesake for Bleecker Street that runs through Greenwich Village in Manhattan, was a prominent banker, merchant, and vestryman at Trinity Church in Lower Manhattan. He owned a 106-acre farm where Bleecker Street is today and a house on Broadway. His brother and son were signers of the Buttonwood Agreement. And that makes Anthony Lispenard Bleecker my fourth great-great-grandfather, if I’m doing my math right.

I guess this whole finance thing is in my blood...

Now, let me show you a good way to protect your portfolio.

Pro Tip of the Day

There’s no such thing as a sure thing on Wall Street...

In fact, 56% of investors believe the market is rigged.

And while you can never be certain of the short-term price movements of stocks, you can take steps to protect your portfolio against sustained down moves.

That’s why hedging your bets by buying market insurance is what pro traders do.

Think of market insurance just like any other insurance. You pay a premium in case something devastating happens to a valuable object you own. And you hope to just eat the cost of the premium because you don’t want to call on the insurance. Your portfolio is no different. And there are tools within the market for you to "insure" your portfolio.

Say you’re long stocks on the Dow Jones Industrial Average. You can use the ProShares UltraDow30 (NYSE: DXD) as insurance. Referred to as the DXD, this is an inverse-leveraged exchange-traded fund (ETF) that moves two times the inverse of the Dow. If the Dow moves down 2%, the DXD moves up 4%. You can see the action in late 2018 and early 2020... 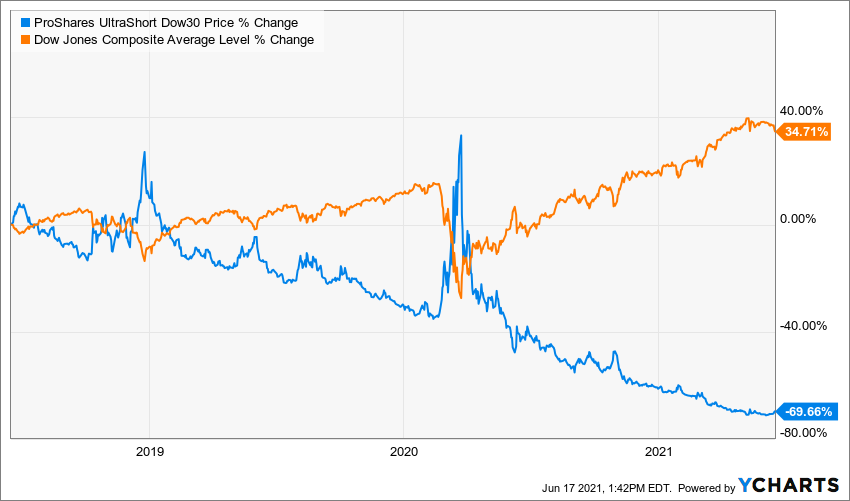 You can even trade options on the DXD to supersize your gains. Just remember that hedges should remain small — roughly no more than 20% of your total portfolio’s worth.

So there’s really no need to panic when the market hiccups, as you can make money whether the market’s up, down, or sideways.

We’re excited to bring you a new segment for Monday. I’ll list the companies I’m watching that could soon make outsized moves, up or down. Just note that these aren’t official recommendations...

Amazon has been ruled a monopoly after a 16-month investigation by the House Judiciary Committee into antitrust violations by big tech. Amazon allegedly undercut competition within its marketplace and bullied successful third-party sellers by copying products and selling them for cheaper using its own brands.

So the House has introduced a bill — the Ending Platform Monopolies Act — that would force Amazon to choose between running its online marketplace or selling within the marketplace. The choice is obvious, and this will surely impact the company’s future sales and growth prospects.

Richard Branson is at it again. The Virgin Galactic founder has been desperate to jump-start the space tourism industry, but with Jeff Bezos potentially launching himself into space this year, Branson is pivoting to the 5G satellite business with a new venture called Virgin Orbit.

Virgin Galactic went public in 2019 via a special purpose acquisition company (SPAC) called Social Capital Hedosophia (NYSE: IPOF). SPACs are known as blank-check companies, as their sole purpose is to raise capital to acquire a private company to take public. After the acquisition, Social Capital Hedosophia gained around 50%, while Virgin Galactic rose a whopping 650%. Had you invested in both, you could have bagged a 700% gain. Not too shabby...

Virgin Orbit is set to go public soon via NextGen Acquisition Corp., so we could be in for another wild ride.

Sumitomo Mitsui Financial Group is a play on the Japanese banking sector. The Japanese government wants cashless payments across the country, and Sumitomo is leading the charge here by providing cashless products and services. The pandemic barely beat the stock down, which is a good sign. And last august, Warren Buffett celebrated his 90th birthday by buying Sumitomo through Berkshire Hathaway (NYSE: BRK-B). It’s trading for less than $7 and pays a healthy 10.56% dividend as of this writing. Sumitomo represents a cheap, conservative play on a solid and growing industry.

Hopefully this gets you thinking about some new possibilities in the market as the summer kicks into high gear.

And if you have any interesting family historical connections, I'd love to hear about them. Just email me here.