It'd been a while since I'd flown in a plane.

To be honest, I didn't even like flying before the world went to shit.

It's cramped, stressful, and it makes me nauseous.

And now, of course, it's a little more dangerous with the pandemic.

Unfortunately, though, some urgent family business called me out of state and I had to go.

But now here's the good news: My flight experience was strangely comforting.

The plane was maybe 25% filled so there was ample space, and it was library quiet. 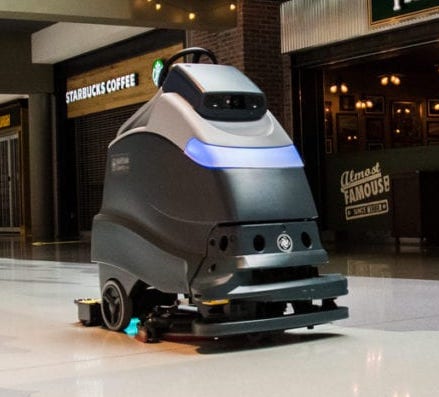 Same with the airport itself.

Gone were the long packed lines. The TSA agents weren't quite so handsy. Everyone kept their distance. And everyone wore a mask.

But here was the craziest part: The Robots.

I kid you not, there was a person-size, Rosie-from the Jetsons-style robot just roaming the airport cleaning the floors with ultraviolet light.

I honestly had no idea what it was at first. I had to Google it. But apparently, ultraviolet C (UV-C) is a wavelength that damages a virus’s DNA and RNA, causing it to stop replicating and die. So, these robots cruise the airport for eight to ten hours a day cleaning floors.

It had something of a sci-fi dystopian feel to it but it was also strangely comforting — this notion that we had machines that could literally do our dirty work for us.

And it didn't stop there either.

When I passed by the gates for international flights and customs, I saw more robots.

These ones were scanners. But they weren't looking for weapons. They were reading people's faces and taking their temperatures.

That is, rather than hand their passports to an agent, travellers were having their faces scanned and their likeness was instantatneously compared to their passport photo.

This is something I'd heard about and even written about, but hadn't yet seen.

This kind of facial recognition technology was rolled out last year.

By 2023, any person flying into, or out of, the United States on an international flight will have their faces scanned, photographed, and compared to their passport picture.

As part of a pilot program (no pun intended) the CBP has already it’s processed more than 19 million travelers using facial recognition technology in airports and at borders, catching 135 "imposters" whose identities did not match their ID documents.

And now, with the pandemic, that facial recognition technology has been augmented to also screen a person's body temperature, checking for fever.

The whole thing is a game-changer when you think about it.

If you hand your passport to a customs agent at an airport, you're basically shaking hands with them. And not just them — every other passenger they've interacted with during their shift.

The same is true for things like pat-downs at stadiums, where security personnel touch thousands of spectators. The need for that interaction could easily be replaced by scanners that can read a person's face, and check for weapons.

If you're looking to stop the spread of disease, reducing personal contact and interactions with shared physical surfaces is paramount.

Facial recognition does that.

The government’s end vision is for CBP to build a vast “backend communication portal to support TSA, airport, and airline partners in their efforts to use facial images as a single biometric key for identifying and matching travelers to their identities.”

This means that facial recognition will also be used for things like check-in, baggage drop, security checkpoints, lounge access, boarding, and other ancillary processes.

That's important because document checks and security lines create bottlenecks — crowds and long lines where large groups of strangers are confined together. This, too, hastens the spread of disease.

But this technology streamlines air travel, allowing passengers to check bags, move through security, and board a plane much more quickly and without exposing themselves to masses of people and disease.

Better still, if a sick traveler is identified, facial recognition technology can be used to find people who came into contact with that person. Those people can than be notified and get tested themselves.

It doesn't stop at airports, either.

Imagine if once you contracted such a disease or developed symptoms, you walked into a doctor's office and simply looked into a small camera. In an instant, all of your medical information pops up on a computer screen at intake, eliminating the need for you to fill out pages of paperwork and potentially infect a medical worker.

This is the kind of thing that's already happening in places like China, where facial recognition and body-temperature technology have proven to be very helpful in preventing the spread of COVID-19.

And now it's here in the United States.

That's why I did some digging and found one of the companies behind it.

Shockingly, the stock trades for less than $0.20 per share, which means the potential gains could be life-changing once this technology really goes mainstream.

Obviously, there's not much time left before that happens so you should check out my latest report ASAP.