Gold futures recently hit prices not seen since April of 2018. That rally may have been a case of "too fast too soon" and profit-takers quickly stepped in.

We are making higher lows but are not in breakout mode just yet.

The higher base is positive and, as expected, the post-tax-loss selling rebound in the juniors has been solid.

Speculative companies like Gainey Capital, once buried at C$0.04, now trade at three times those levels.

Institutional and retail capital is slowly but surely working its way back into the yellow metal.

M&A is also picking up with the Barrick Gold and Newmont JV announcement.

Newmont has 19 mines adjacent to Barrick’s and the merger is supposed to allow both companies to operate in Nevada as a single entity.

There’s two important factors that also lead me to believe that 2019 is finally the year we see a real breakout in the gold space.

In addition, Fed Chairman Jerome Powell has blinked and instead of proceeding with previously anticipated rate hikes, we may now get rate cuts and the Fed may also decide to stop unwinding its $4 trillion worth of bonds on its balance sheet.

The Fed currently allows up to $50 billion a month in proceeds from Treasuries and mortgage-backed securities.

The $4 trillion balance sheet is down $500 billion since the Fed started reducing its holdings. 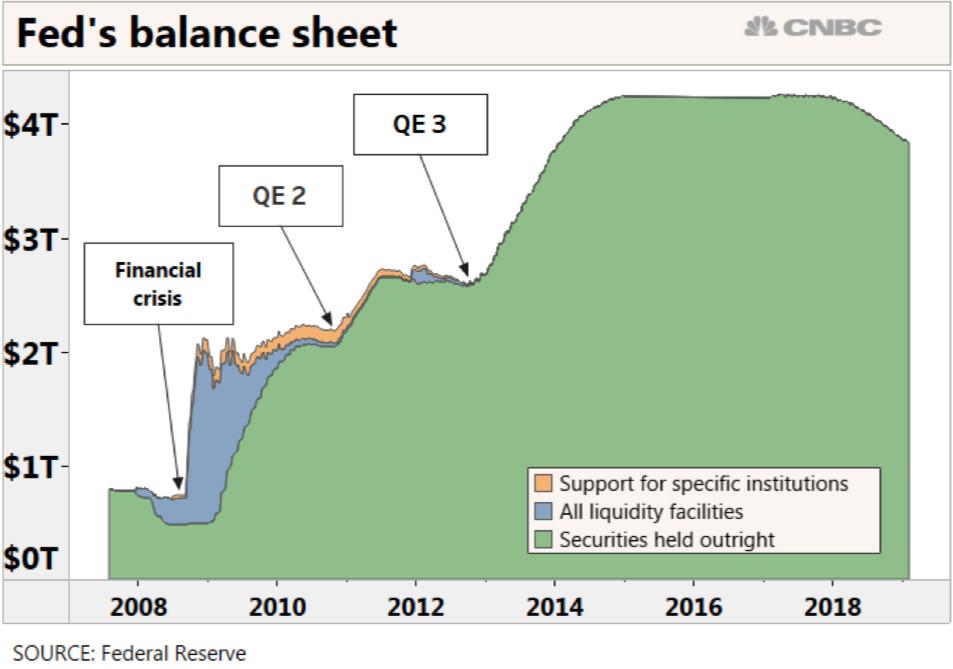 The groundwork is already being laid for negative interest rates in the U.S.

A San Francisco Fed report recently “found” that after the financial crisis the economy probably would have recovered faster if the Fed would have used negative interest rates.

The European Central Bank, the Bank of Japan, and the Swiss National Bank have already been conducting monetary policy with interest rates below zero since at least 2014.

Needless to say, 2019 is shaping up to be a pivotal year for those of us who have been patiently adding to and accumulating positions.

It wouldn’t surprise me to see gold pull back in the first half to set up a big rally in the second half of the year, which gives us a little more time to add to our favorite positions.

Add a decision on the Section 232 petition in the uranium space and a deal with China that paves the way for infrastructure spending and we could very well see the best second half we’ve seen in quite some time in the gold, uranium, and base metals space.

What You Should Know About The Space Force (And How to Profit)
Last Tuesday, President Trump signed a new policy directive that laid out his long-promised plans for a U.S. Space Force. A day later, Acting Defense Secretary Patrick Shanahan submitted a legislative proposal to Congress, requesting the authority and funds to establish the new military service.
Cannabis: It's a Good Thing
Martha Stewart just joined Canopy Growth (NYSE: CGC) (TSX: WEED) — the biggest cannabis company in the world, and the best recommendation of Outsider Club editor Jimmy Mengel's career. They are teaming up for a CBD product that could eventually hit big-time retailers like Walmart.
"How Did I Get Here?"
Outsider Club founder Nick Hodge reporting from California on a cannabis company he was vetting. It's permitted to grow, propagate, extract, and sell cannabis in California. It’s an extremely early-stage, high-risk deal.
Investing in Marijuana Without Getting Burned
The marijuana industry has rewarded scores of investors with life-changing gains.