Cannabis stocks as a group have come off a bit as the good buds are being separated from the sticks and seeds (move over wheat and chaff).

Other descents have not been as pronounced. And high-quality companies have held their ground relatively well. I’m thinking of names like Hexo (NYSE: HEXO). 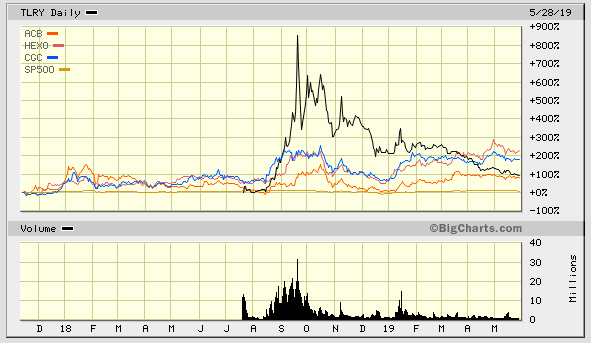 First, as long as you got in before last summer, you have at least doubled your money in most major marijuana names. And there was potential for much more.

If you followed early leaders in the space like Jimmy Mengel, you’ve made thousands of percent.

Second, the cannabis market has been developing and trading, as most markets do, in waves (or cycles, if you prefer). Back that chart out a bit and you can see three distinct ones so far. 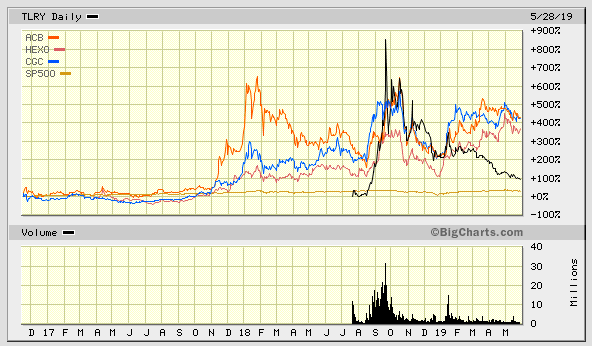 One in late 2017. One in mid-2018. And one early this year that coincided with a sharp rebound in the broader market.

We’re in a bit of a breather period now, with companies jostling for position in the next round.

Third, the next round is coming in multiple ways. Established markets are changing quickly as consumers have had time to try many products and find what works for them and what they like best. In these markets, cannabis concentrates are overwhelmingly the answer. These are extracted oils that are mainly vaporized for consumption, but can be used in numerous ways.

A recent report from BDS Analytics and Arcview Market Research concludes that cannabis concentrates sales far outpace both flower and edibles in legal U.S. markets, and that they show no signs of slowing down. As the Cannabis Business Times reports:

Retail concentrate sales are projected to hit the $8 billion mark by 2022, based on data collected through the research company’s GreenEdge point-of-sale tracking service.

Concentrates have become the fastest growing of the three major segments of the legal cannabis market (flower, concentrates and edibles), largely due to consumer appeal, the report says—the ease of use, potency, discretion and portability of concentrates draws consumers in.

In 2017, vapes already made up more than half of total U.S. concentrate sales, the report continues, but the subcategory’s appeal to consumers will likely continue this pattern and reach nearly $6.5 billion in total U.S. sales in 2022.

For comparison, cannabis vape sales were under $100 million in 2014. From $100 million to $6.5 billion in eight years is mind-boggling growth.

Fourth, CBD. It. Is. Everywhere.

Lastly, as I’ve told you so many times, this market is still developing. Many more states still need to legalize. And it will be federally legal in the United States at some point. It could even be a major 2020 presidential election issue as it has majority support and can attract votes.

As these new markets come online, they will catch up to the latest trends more quickly. What I mean by that is they will gravitate to concentrates more quickly than early states like Colorado and Washington.

I have been establishing and holding positions in extraction and CBD companies.

And specifically, there is one that combines the best of both as it produces a pure CBD oil.

It is exceedingly cheap right now, but I don’t expect that to last forever as commercial contracts are approaching and I expect it to get its stock listed on a major U.S. exchange this year.

The cannabis market is changing. But the profits are far from over.

In the Facial Recognition Debate, I Side with Democracy
Earlier this month, San Francisco banned local government agencies from using facial recognition technology. And you know what? I applaud them for it.
First Pot Takes NASDAQ, Then the World!
Marijuana stocks have come a long way and there is still plenty of room to grow. Outsider Club editor Jimmy Mengel informs investors of the many profits to come...
Pot Still Depends On The People
The marijuana sector has grown by leaps and bounds after election years — both presidential and midterm — since its earliest days. Outsider Club editor Adam English discusses what we can expect going forward...
Heal Your Ailing Portfolio Body