The coming increase in lithium demand for batteries is very real.

A battery revolution is upon us, driven by falling prices — like with solar — that will fall even further as new gigafactories come online to create scale — like the one being built by Tesla in Nevada (there's a reason Tesla chose Nevada, and it's partly because of the lithium production there.) 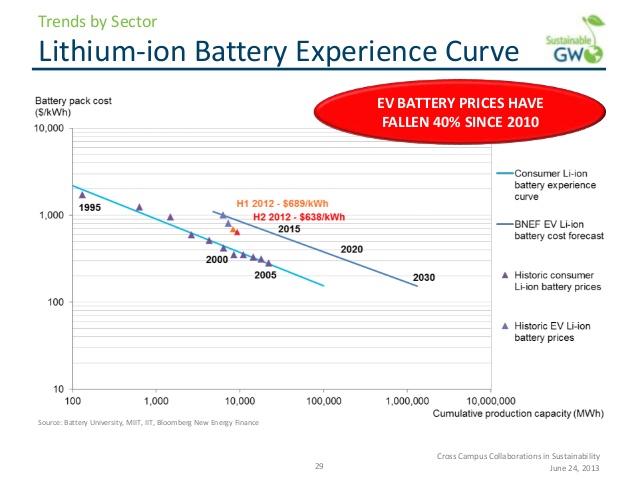 These falling prices are leading to mass adoption of lithium ion batteries, as well as new uses for them. Electric cars. Power tools. Toys. And now, increasingly, grid and home energy storage.

Buyers of lithium include Tesla, LG, Samsung, BYD, Panasonic, and other battery manufacturers.

There is also a very real shortage of battery-grade lithium material that is now causing prices to rise — a phenomenon that will be the catalyst for new production to come online. As Bloomberg reported in February 2016:

Prices of lithium carbonate — an industrial chemical used in lithium ion batteries — have surged 47 percent in 2016 from last year’s average, according to London-based Benchmark Mineral Intelligence Ltd. Two of Australia’s five best-performing stocks in the past 18 months among a Bloomberg Index of 2,035 listed companies are developers of lithium materials operations. From 2015 to 2024, the market to supply lithium ion batteries for light vehicles may total $221 billion, according to Navigant Consulting Inc.

Benchmark Mineral Intelligence projects lithium carbonate prices to peak near-term in 2017 at almost $9,000 a tonne before falling back a bit as new supply enters the market. It adds, however, that this may not prove enough, as new sources of demand such as Tesla's gigafactory in Nevada open up.

Prices have doubled since 2005, and are expected to remain elevated for the next several years.

All this has investors desperately looking for a vehicle to invest in the lithium sector.

The lithium market is currently tiny in relation to other commodity markets. Annual sales of lithium in its various forms — pure lithium, carbonates, hydroxides, concentrates, etc. — total around $1 billion.

This will change as demand ramps up, from a current compound annual growth rate (CAGR) of 10% to 20-30%+ for car batteries and other large storage applications over the next decade. 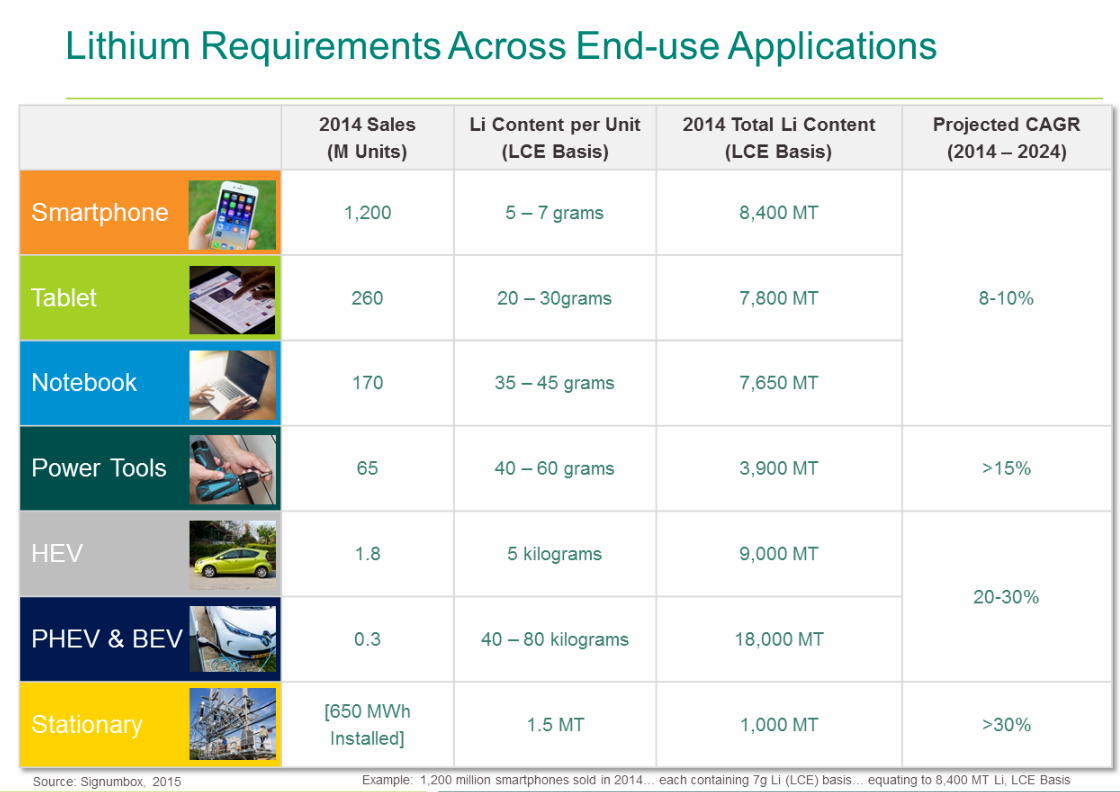 As demand is taking off, production comes primarily from a handful of companies:

None of these are pure plays, leaving investors looking for a way to play this up-and-coming market.

The four companies mentioned above represent about 86% of global lithium production. Chinese companies mostly make up the remainder.

Talison operates the Greenbushes hard rock (spodumene) mine in Western Australia, from which it exports over 350,000 tonnes of lithium products annually. It also owns a prospective project in Chile that consists of eight salars (brine lakes). Talison is a private company. It is 49% owned by Rockwood, which was purchased by Albemarle in 2014 for $6.2B.

Albemarle (Rockwood), in addition to its 49% stake in Talison, owns and operates a mine at the Salar de Atacama project in Chile and the Silver Peak mine in Clayton Valley, NV. Albemarle is a $6.5B market cap diversified chemical corporation and is not a pure play on lithium production, though it is positioning itself as the face of the lithium mining industry.

SQM also operates in the Salar de Atacama, with a project adjacent to Albemarle's. It has run into political and legal problems in both Chile and the U.S., and the life of its mine could be reaching an end in the next five years. It is a diversified mining and chemical company and not a pure play on lithium.

FMC Operates the Salar de Hombre Muerto brine mine in Argentina, which has had substantial technical problems expanding production. FMC is also a diversified chemical company and not a pure play on lithium.

The problems being faced by SQM and FMC coupled with rising demand has led to a very tight supply/demand picture and rising prices. Albemarle was completely sold out of lithium last year. It announced plans for a new 50,000 tonne plant in September 2015, but that is not expected to come online until 2020.

The most productive and economic lithium mines in the world are based in underground brines, which are pumped to the surface and evaporated to reclaim the lithium. Hard rock mines are secondary in production and economics. There is also lithium present in many clay formations, but no clay-based lithium mine has ever come online or been proven to be economic.

Many new projects that were expected to come online recently have failed or gone bankrupt in the process. 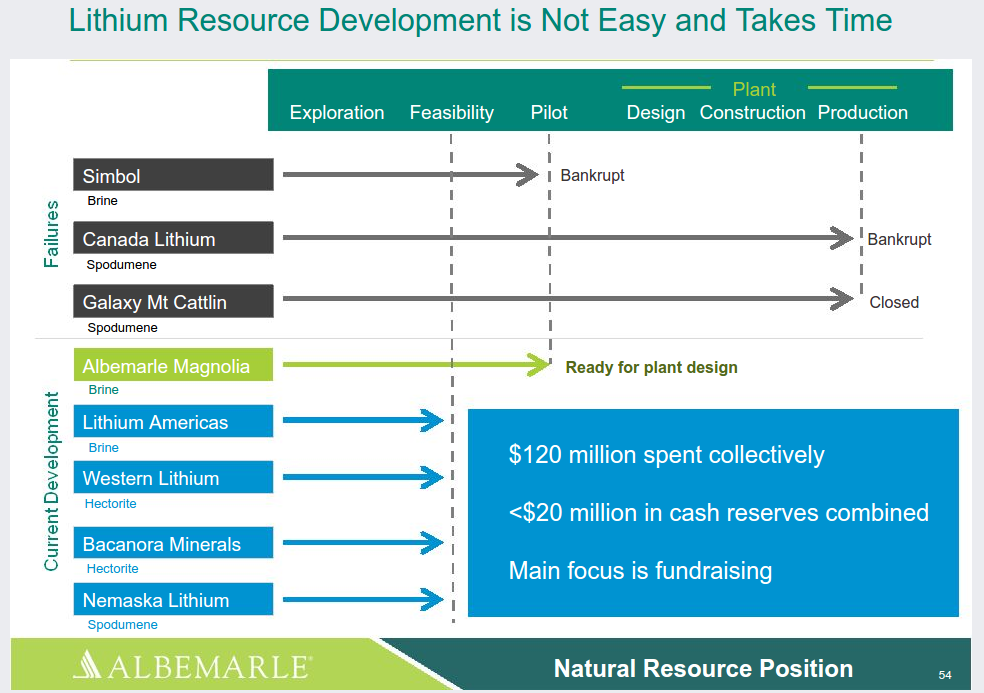 Others are in various stages of preproduction: 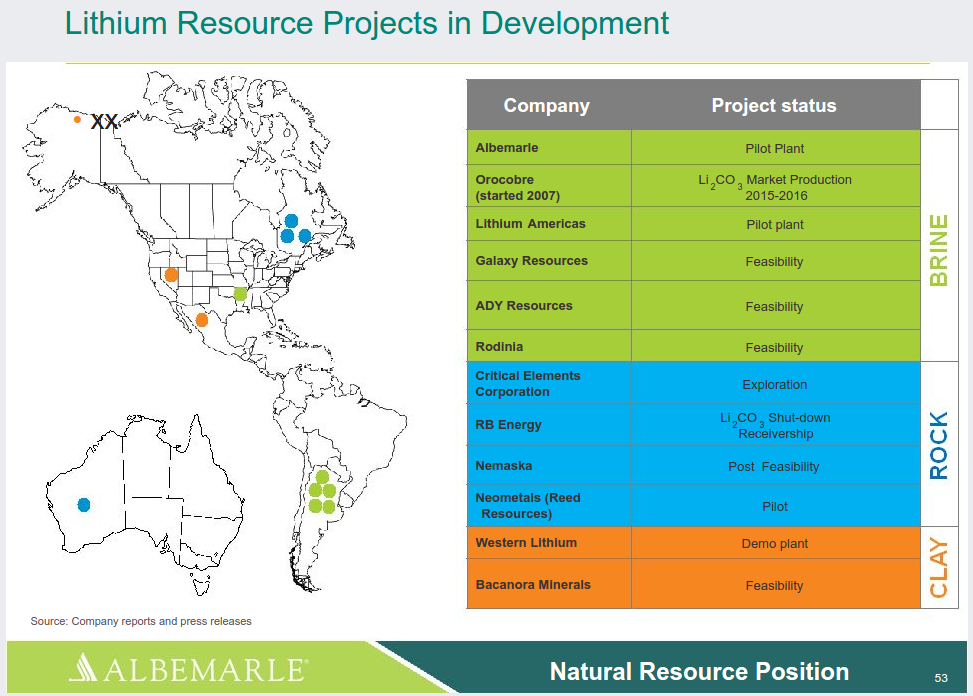 I would not invest in a clay-based operation at this time.

Orocobre is already at production and has a ~$500 million market cap based on a single project that, when it reaches full production, will produce 17,000 tonnes of lithium carbonate equivalent annually. Its market cap is so high because of the scant other options for investors wanting exposure to lithium.

Nemaska and Galaxy both have market caps well north of $100 million.

Nemaska's only project — Whabouchi — did a 2015 Feasibility Study that showed a pre-tax net present value of C$924M and internal rate of return (IRR) of 25.2%.

So both of those companies are much further along the development process.

Other companies are now jumping on the land position bandwagon, which is the same thing that happened in the rare earth run a half decade a ago. The lithium market today looks just like the rare earth market then.

Many gains will be had in the lithium sector. But there is much risk. Tread carefully.

I will continue to report on the lithium sector as all this unfolds.