Take a look at this photograph: 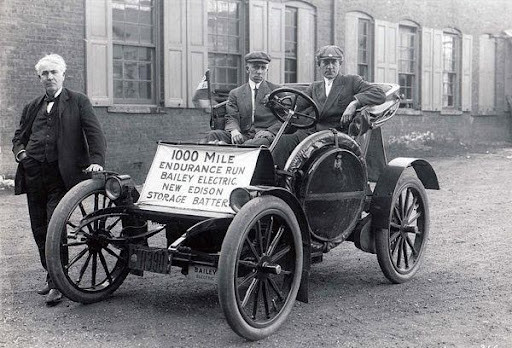 To the left is Thomas Edison, the great inventor of the carbon filament lightbulb and phonograph.

It's a prototype electric vehicle (EV).

This picture was taken in the early 1900s.

My great-grandfather worked at Edison's workshop in Menlo Park, New Jersey. Back then, employees would have seen Edison zipping around the old dusty roads in this EV, one that used a new battery made of nickel and iron.

Edison was all-in on EVs and said, "Electricity is the thing. There are no whirring and grinding gears with their numerous levers to confuse. There is not that almost terrifying uncertain throb and whir of the powerful combustion engine. There is no water-circulating system to get out of order — no dangerous and evil-smelling gasoline and no noise."

It's an idea that's been lost to the modern history books.

On the contrary, the first-ever EV was produced in 1898 by Ferdinand Porsche.

It was called the Egger-Lohner C.2 Phaeton. 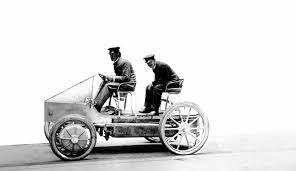 What a bad-ass name.

In fact, Thomas Edison and Henry Ford were working on mass-producing an EV as early as 1914.

Within a year, I hope, we shall begin the manufacture of an electric automobile. I don't like to talk about things which are a year ahead, but I am willing to tell you something of my plans. The fact is that Mr. Edison and I have been working for some years on an electric automobile which would be cheap and practicable. Cars have been built for experimental purposes, and we are satisfied now that the way is clear to success. The problem so far has been to build a storage battery of light weight which would operate for long distances without recharging. Mr. Edison has been experimenting with such a battery for some time.

Edison had big dreams for EVs.

The same year, Edison gave an interview with an automobile magazine, espousing that EVs would replace the trucking industry:

I believe that ultimately the electric motor will be universally used for trucking in all large cities, and that the electric automobile will be the family carriage of the future. All trucking must come to electricity. I am convinced that it will not be long before all the trucking in New York City will be electric.

So what happened to the future of transportation?

According to Wired magazine, "Some conspiracy theorists believe the oil cartels got to Ford and Edison and prompted them to abandon it. These theorists offer as evidence the 'mysterious' fire that nearly destroyed Edison's workshops in West Orange, New Jersey, in December, 1914."

I wouldn't put it past the oil companies, but the seminal problem behind the early EVs (which is still the focal problem today, by the way) was the battery.

You see, early EVs used lead-acid batteries, but they were slow to charge and often spewed out acid that ate away the car's internal and carriage compartment. They also couldn't be disposed of easily.

To combat this problem, Edison founded his own battery company and refined the nickel-iron battery.

But just look at these things: 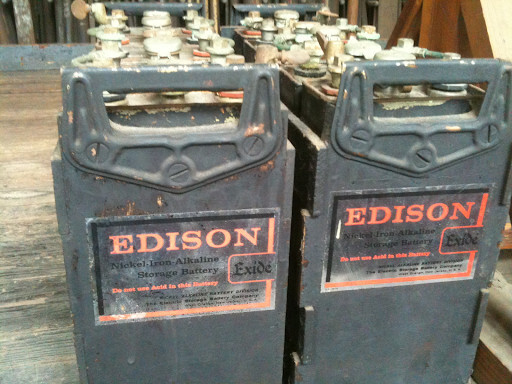 They were huge, expensive, and didn’t last very long.

Fast-forward to today and the world has chosen lithium-ion batteries as the go-to technology to power everything from EVs and cars to the entire power grid in some parts of the world.

But our lithium-ion batteries have the exact same problems that the Edison batteries did.

Michael Shellenberger, founder of the California-based nonprofit Environmental Progress, recently said, “One reason to be suspicious of electric cars overall is that we haven’t solved any of the real problems that we’ve always thought they had.” Those century-old problems being price, range, and reliability.

Yet lithium continues to have a stranglehold on the U.S. economy.

Oil of the 21st Century

Lithium’s now known as the “oil of the 21 st century" because the entire U.S. power grid literally runs on it.

And with the current administration’s push for the U.S. to go “green,” we’re going to need a lot more of the stuff.

The problem is right now there’s an international battle between the U.S., China, and Russia for control over the hot commodity.

China controls more than half of the world’s lithium supply, and it would love nothing more than to exert its dominance over the U.S. in the form of a lithium embargo.

In fact, my colleague Alex Koyfman sounded the alarm bells this week about a closed-door meeting in Uzbekistan between Chinese President Xi Jinping and Russia's strongman, Vladimir Putin.

Western sanctions and the ability to control of a large chunk of the world's energy supply, including lithium.

You think the supply chain mess and energy prices are bad now?

We ain’t seen nothin’ yet.

And only one company is quietly producing this lithium battery alternative.

Alex just released a presentation that explains the technology, the company, and how it could receive a windfall of investment as the financial community catches on.

This could be huge.