Publisher's Note: Mr. James Dines runs one of the world’s longest-lasting financial newsletters, The Dines Letter, and is "The Original Gold Bug."

Here's a look at part of his current gold outlook from his 2019 Annual Forecast Issue.

Gold investing is so entirely out of favor by investors worldwide that mainstream Security Analysts don’t even venture an opinion on them, which contrarily is bullish.

They were too busy buying hi-tech giants, just before they declined.

We are not deterred by negative Mass Psychology because such pessimism starts to occur near the start of bull markets, according to the Dines Theory of Positive Negativism (DITPON).

See the chart of gold (below) and find Major Uptrend 2; with its magnificent bull market from 1999-2011. 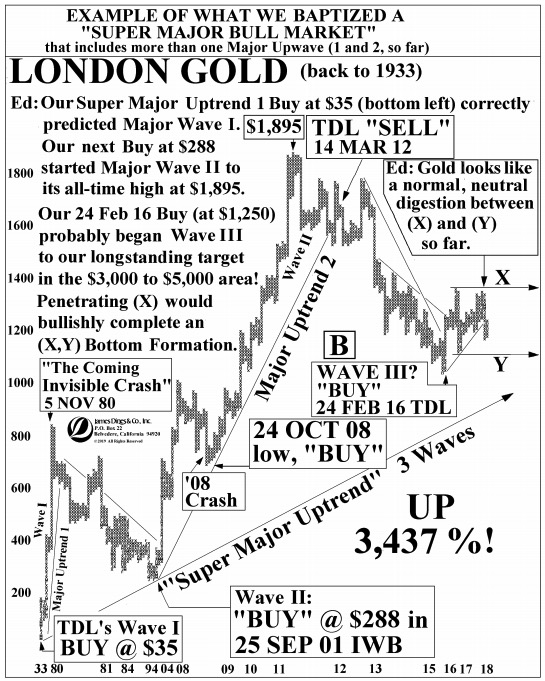 We sold on 14 Mar 12 after penetration of the uptrend, and are now in the present neutral Congestion Area between (X) and (Y) that is absorbing profit-taking.

We now await the next Breakout, hopefully to the Upside. For patient investors wishing to drink upstream from the herd, gold won’t double overnight, but there’s no bull market as profitable as a monster gold bull market, and Super Major Upwave III will have its day.

If stocks keep dropping enough to trigger serious investor selling, and Mass Contagion kicks in, a flight to the haven of gold should be one of its refuges. So far, there has been no Mass Fear sufficient to trigger that.

America’s federal budget deficit has grown to around $22 trillion, nearly everybody unimpressed, the classic pink elephant hidden in the basement.

Despite the efforts of a few politicians to balance the budget, it is surely too late; as no matter what anyone does, there is no way for America to earn enough to pay off that debt, which continues growing at an alarming rate of around $1.3 trillion a year. Therefore we expect something debt-related to occur, which we are not yet prepared to discuss.

The very function of linking paper money to gold is to force the balancing of budgets.

A country that printed too much paper would lose gold until it ran out, and investors would dump their remaining paper into the trashcan where it would belong.

That’s partially why so many economists hate gold: it limits their ability to overprint the currency and then call it “growth,” which is a lie.

There is already a so-called “debt ceiling,” yet politicians just keep raising the limit every time! Without a link to gold, or anything else of value, such as barrels of oil for example, there is no keel, or ropes tied to a dock keeping boats from banging into each other, and currency crashes will be a natural result, to worsen in coming years. Especially if Mass Fear kicks in amidst national economic failures and there is a sudden rush out of paper money.

Most doubt a possible gold rise, figuring that in a deep recession general industrial output would go down, dragging metals production lower, for example as is now beginning in China.

But the metals affected are mainly industrial metals. Do not confuse them with monetary metals such as gold or silver, whose intrinsic values are stable, controlled by monetary rather than industrial factors.

Not everybody is aware that gold stocks spiraled historically skyward during the 1929 crash, believe the unbelievable or not! It’s the truth.

We saw charts of Homestake, Dome Mining, and others that were roaring vertically during the stock market crash.

As described in our Technical Analysis book, we stumbled on it in old newspapers when we became “The Original Goldbug.”

We remember digging through dusty newspapers in library stacks; a discovery that led to our conclusion that gold would be the ultimate haven during what we call “The Coming Second Great Depression.”

We believe gold’s first cycle of Wave III began after 2008’s plunge, and we hope we are mistaken because it would imply a depression somewhere ahead.

We have faithfully recorded gold’s Mass Psychology going back decades — it took us that long just to figure out how to detect its subtle traces — and have concluded it’s now descending to the area where gold and silver bull markets have begun in the past.

This is straight Mass Psychology — there is no other such Technical Indicator of which we know that could anticipate the early stages of bull markets, instead of waiting for actual Upside Breakouts.

Which gold stocks to buy?

You can get access to my portfolio of recommended precious metal stocks here.

Everyone Please Stop Misquoting This Man
There is always a chance for a second act during “boom days” and F. Scott Fitzgerald knew it. Now a disgraced, once iconic cannabis company is proving it. Outsider Club editor Adam English discusses the comeback inside...
Praise for Outsider Club Editors
In the feel-good spirit of Christmas I thought I’d share with you some of the very nice things you’ve said about your Outsider Club editors. These responses come from your emails last month, when we asked you to write in and tell us who your favorite editor was...
Founding Fathers "Dancing in their Graves"
With the stroke of a pen, President Trump has ushered in a new era of agricultural industry. The 2018 Farm Bill called for the legalization of industrial hemp and has been passed by the Senate and House. What does this mean for investors in 2019 and beyond?
Heal Your Ailing Portfolio Body