Jerome Powell Is a Serial Killer

Jerome Powell is a serial killer.

Like Michael Myers or Jason Voorhees, he won’t stop until every segment of the American economy is bloodied or buried.

Indeed, U.S. consumer spending and retail sales are collapsing just like I said they would back in the spring.

The government stimulus and the excess capital that helped drive the post-COVID spending rebound have evaporated. And the savings many people accrued while sitting at home have been exhausted.

Meanwhile, staggering levels of inflation have overwhelmed any wage gains workers might have made in the past two years. And food and fuel are monopolizing personal expenditure.

As for the data…

The slip into negative territory surprised some, but I’m pretty sure we all saw this coming.

Consumer spending in the first three months of the year (adjusted for inflation) was also revised down to a 0.5% increase from the government’s original estimate of 0.8% growth.

Yes, that’s still technically growth, but the prevailing trend is a precipitous drop.

That is, spending on services like travel and restaurants was growing more than 30% in 2021, but now it’s half that according to Barclays Capital. 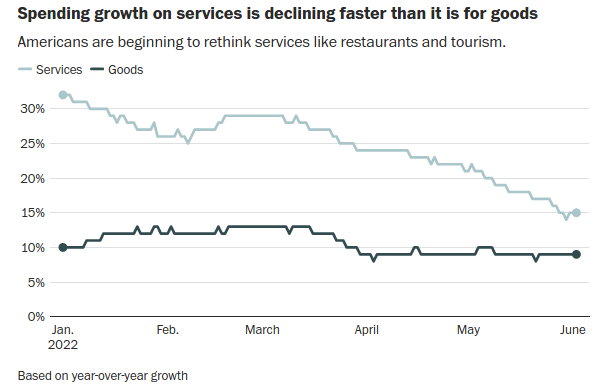 And credit card spending was just 10% higher in May after averaging 20% through last year.

Earnings from the country’s biggest retailer further corroborate this narrative, as Jerome Powell leaves a trail of corporate casualties in his wake.

Walmart’s adjusted earnings per share fell 23% in the first quarter, largely because its margins were eroded by price reductions.

This is a running theme in the retail sector: towering inventories and shrinking margins.

Target is in the same boat.

It had $15.1 billion of inventory at the end of its fiscal first quarter on April 30. That’s 43% more than it had at the same time last year.

As a result, the company says its operating margin rate for the second quarter will be 2% — down from 5.3% in the first quarter.

Powell even claimed another victim this week, when Bed Bath & Beyond axed its CEO, Mark Tritton.

The company reported a 27% drop in sales for the first quarter and a net loss that widened to $358 million from $51 million.

Tritton is taking the heat, and that’s reasonable considering he’s made some ugly missteps.

Tritton’s shift into private-label goods isn’t the sole reason for his company’s collapse. It’s just that people aren’t as keen to decorate their homes these days.

And speaking of homes, guess who’s next…

Powell’s rate hikes have driven mortgage rates beyond 5% — 2% higher than where they started the year. They’ll soar past 6% soon enough and probably even 7% by the end of the year. 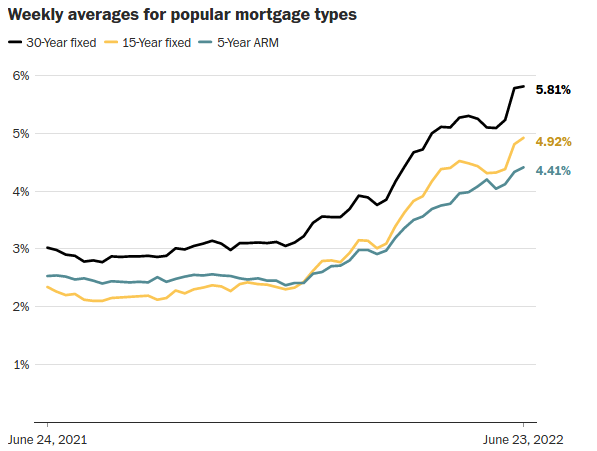 As a result, the average monthly mortgage payment rose to $1,897 in May.

That’s double what it was a year ago and higher than it was in the run-up to the 2008 financial crisis.

It’s no surprise then that seasonally adjusted home sales fell 3% month over month in May.

Generally speaking, the demand for homes is still so high and inventory so low that the housing market hasn’t suffered an outright collapse.

But there will be a breaking point — especially if Powell’s policies start to erode the labor market and wages.

You don’t have to squint hard to see that happening in the near future, which is why so many people are talking about a recession as if it’s a foregone conclusion.

It kind of is.

Jerome Powell is on the loose.

There aren't many places to hide, but one investment I'd strongly consider is gold. And if that’s a direction you want to go in, you should definitely check out Luke Burgess’ latest report on one of the richest gold discoveries of the past several decades.

That could do quite well in this difficult environment.