Markets took a heavy beating only to come roaring back Friday after Fed Chair Jerome Powell finished up his testimony before the Senate Banking Committee.

But one conversation stood out to me.

It was about the cause of inflation and rising gas prices.

For some context, we’ve heard over and over again from the Biden administration about the “Putin price hike” and that gas prices and inflation are high as a consequence of the war in Ukraine.

But when Tennessee Senator Bill Hagerty pressed Powell on the issue and asked if the war was the primary driver of inflation, Powell said this: “No, inflation was high... certainly before the war in Ukraine broke out.”

But anyone with two brain cells already knows inflation was rampant before the war.

We’ve been writing about inflation for years, pointing out how grocery prices and farming input costs were rising astronomically.

So we didn’t really get any new information from the Fed, and maybe that’s a good thing.

After all, Wall Street hates surprises, unless they’re to the upside.

I’ve been keen on the fact that by now, markets should have already priced inflation, gas prices, and supply chain disruptions into stocks

So I admit, it was strange that the market continued falling for so long.

But the end-of-week rally was a sign that investors are looking to the future and can see a light at the end of the tunnel.

After all, I’ll say it again, in an inflationary environment, there’s no better place to put your money than stocks (other than real estate, but rising interest rates are making it harder for new homebuyers to purchase a home).

It might seem counterintuitive, but you know we’re contrarians here at Outsider Club.

So, sure, volatility still abounds and there will be plenty of losers.

But that’s the risk you must take in order for the potential of outsized profits.

Now, we haven’t just been making bull calls, either...

Last June, Coinbase was trading around $229.

It’s dropped nearly 75% since then. 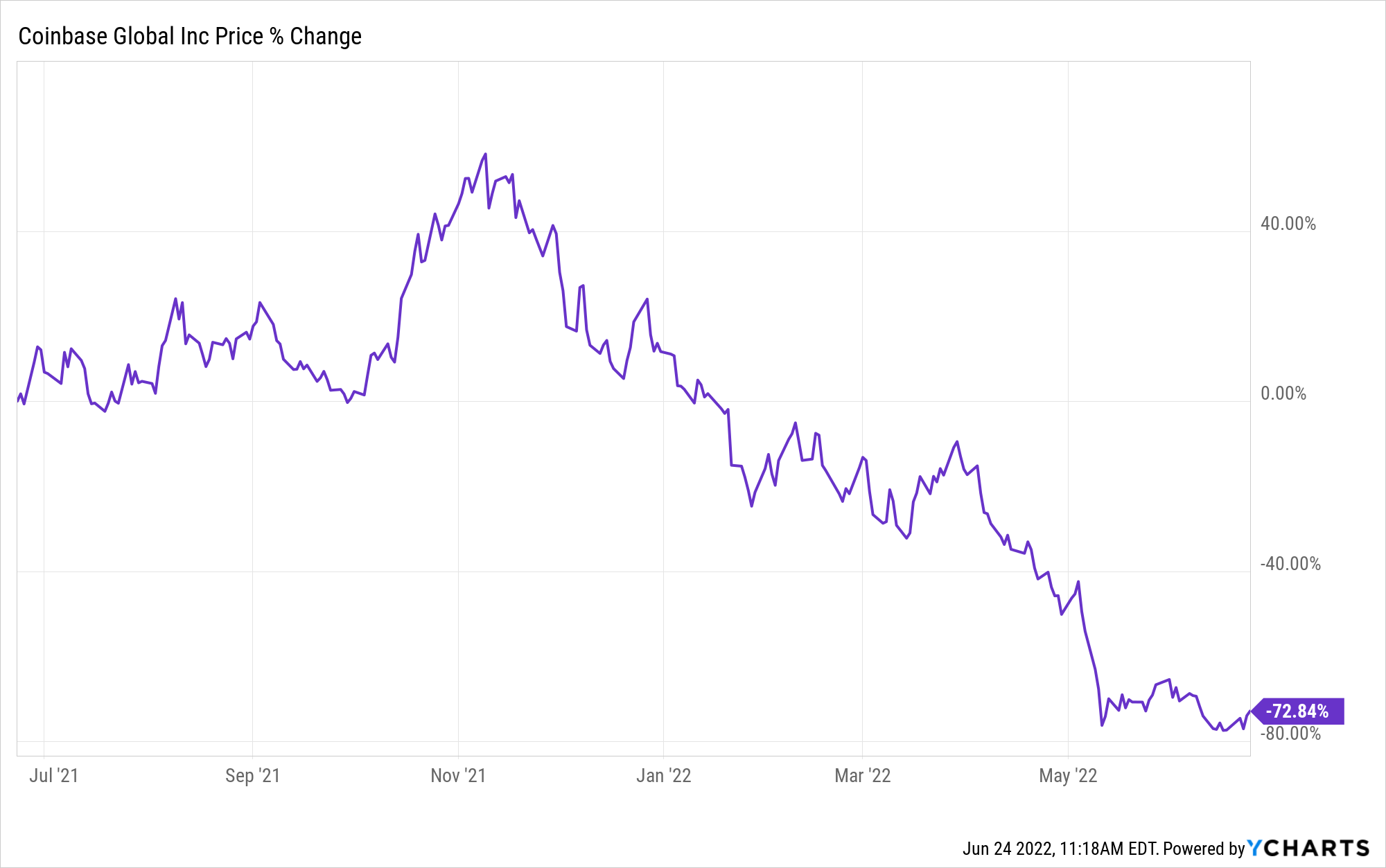 Almost exactly a year ago, I wrote that you should stay far away from Coinbase as an investment, and it has everything to do with those transaction fees.

You see, whenever you buy crypto on Coinbase, the company takes a cut!

Here’s what I wrote:

To buy and sell cryptos using the company’s service, you must pay a fee for each transaction. As it stands, 90% of revenue comes from transaction fees, while 10% comes from the sale of its own crypto assets to customers. (Can you say shady?)

It seems like a decent idea at first because as long as people are buying and selling cryptos, Coinbase makes money.

But what happens when people stop trading cryptos or prices tank?

Analysts at the Nasdaq, the exchange on which Coinbase is listed, are not optimistic...

This means the company’s revenues, monthly users, and total transaction values are directly dependent on the pricing of cryptos.

That’s an unsustainable business model if I’ve ever seen one, especially now that crypto values have plummeted.

Not to mention company insiders have greedily sold shares.

He couldn't care less about the company or the future of crypto despite what he says; he’s already made his millions.

And that’s exactly the problem with crypto in the first place...

These crypto fanboys trade in their coins for cash and say, “See, look at the power of crypto.”

But no one wants to be caught holding the bag.

Not to mention the security risks.

On Friday, hackers stole $100 million worth of crypto from startup Harmony.

That's on top of the $600 million stolen from Ronin Network and $320 million hacked from Wormhole.

So, like I said above, the best strategy in an inflationary environment (or any environment, really) is to buy solid dividend-paying companies with heavy insider buying while speculating on some small caps and microcaps.

We're ignoring the mainstream media noise and following our gut.

We're contrarians, after all.

And one area that's hot these days is oil.

But what's the best way to play it?

Well, it's not what you think.

Our energy and oil analyst Keith Kohl has a bold prediction about the oil markets.

And it all starts right here in the U.S.

He believes these three oil stocks will not only help investors profit from the flood of U.S. oil that's on its way but also give you a way to bank gains off the geopolitical instability.

P.S. If you've been reading me in these pages, you know I get a kick out of tracking legal insider trades and trying to beat the Wall Street elite at their own game. Well, now you can follow me in my new series on YouTube called Inside Baseball Play of the Day. I cover the latest stock market shenanigans and legal insider trading, and even give out some free trade ideas. Make sure to like, subscribe, and leave a comment if you're so inclined. We'd love your feedback.