James Dines: Which Stocks To Buy?

Publisher's Note: James Dines, widely known as "The Original Goldbug," brings his formidable experience and expertise with precious metals to his readers in the latest issue of The Dines Letter.

Read on for his expert analysis and a look at the kinds of stocks to be buying today.

"Take calculated risks. That is quite different from being rash."

A four-flusher is someone who pretends to be what he is not, a phony, a bluffer. In the card game of poker, a “flush” is a potential winner, a hand that contains five cards of the same suit. A bluffer who has only 4 is a “four flusher.”

The current stock market appears to be a four-flusher. It’s been making one new all-time high after another this year, driving Mass Psychology to a frenzy. However, being objective, the 2018 to 2019 comparative November highs table (below) shows the changes in these 7 leading averages as only marginally higher this year. How could this be? 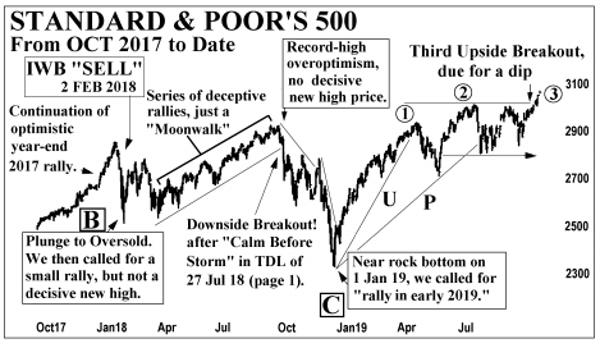 New all-time highs are important, but are not everything. For example, Nasdaq made a new high in early November. It also a reached a new high this April and July – both times the rally fizzled out and an abrupt decline followed — overall, net, net, flat.

In fact, this phenomenon was described in our book, Technical Analysis, as a type of deceptive Top Formation. We have frequently mentioned it in the last two years, and we call it the Dines Moonwalk Formation (DIMF). It is based on Michael Jackson’s famous moonwalk in which he dances backward while seemingly walking forward. This table is our example of it, an illusion of big moves that are relatively small, despite all the noise about “new highs.”

Further, we don’t observe the mass of stocks following the leading averages in Upside Breakouts. So how do we lead our TDLers to make money from the Upside Breakouts that leading averages are indicating? Where are the buying opportunities? We perceive too many vastly overpriced stocks, many of which have been rising for 10 years, which suggests continued caution, choosing opportunities very carefully, and focusing on precious metals mining stocks.

One of this financial newsletter’s specialties is “discovering” what is in plain sight, identifying opportunities to drink upstream from the Herd. It amazes us that so many investors simply don’t always perceive an obvious way to make money. Time and again TDL has discovered new bull markets, and long-term TDLers know by now how we handle them. Our latest was pot, as “The Original Cannabis Bug.” Huge-percentage profits were made by those who followed us into pot stocks, which admittedly took nerve to hold for a few years. For example, Canopy was up 2,569% at its high. Pot stocks are in another of their cyclical declines, now nearing tempting buying opportunities, using “scaling down.”

It’s getting a bit late to do much new buying of palladium, so now is the propitious moment to detect the next group leader. There are spanking new uptrends, contagious to the other four precious-metals: gold, silver, platinum, and even rhodium.

We suspect lonely and media-neglected silver might be the next leader. Silver bullion is calmly holding in the high 'teens, absorbing profit taking, and still very bullish. Still far below Major highs, silvers have nonetheless been impressive recently. Silver stocks are sporting far larger percentage gains, since November of last year, than nearly all the fabled FAANG stocks bruited in the headlines!

Investors miss the birth of new bull markets because they tend to slip in so sneakily and silently. Look around at the mass media — we haven’t seen any of them recommending silvers, although palladium’s near-vertical rise is beginning to edge toward a bit of mass awareness. And who’s even heard of rhodium? That’s what wise investors have been buying.

Please keep in mind — precious metals corporations are unique in that they produce money, specifically gold and silver, so that when prices of those bullion rise, the extra money flows directly into their profits without the company doing much extra.

It’s not easy leading TDLers to silvers, but that gives the advantage to investors who make the effort to decipher the hidden pearls. There are too many inefficient tiny silver mining companies, so a serious merger spree will eventually begin. Thus we must at least keep a close eye out for a good acquirer of small silver companies, as well as acquisition targets. We’re still studying that.

As always, we recommend selling small percentages on the way up, to lock in some profits. Also, silvers look slightly lower, due to their large previous rises. So scale in, buying a percentage more on each dip. Silver has a chance of doubling your money again.

Mr. Dines: Gold's Next Great Upwave
We have long predicted the upcoming upwave would be bigger than any of the previous ones; adding to your gold and silver positions would enable you to benefit even more when it arrives.
Investing in Marijuana Without Getting Burned
The marijuana industry has rewarded scores of investors with life-changing gains.