James Dines on Gold: The Truth Isn't The Same Everywhere

Publisher's Note: Today we turn to Mr. James Dines for his latest take on the gold market, which has found a lot of resistance around $1,500 per ounce. However, if you look outside of the U.S.A., the price of gold is on a whole different trajectory.

Read on for his insights from the latest issue of The Dines Letter.

There is no connection between the words bazaar and bizarre. Bazaar is a place where goods are sold, and comes from the Russian word bazaar. Bizarre, meaning strange or unusual, is derived from the Spanish bizarro for brave. Shopping at a stock exchange these days could be a bizarre bazaar!

Longterm TDLers are aware of our longstanding view that virtually anything could become addictive: hard drugs such as opium or heroin obviously, and nicotine, but also sugar, chocolate, and even food!

Even printing too much paper money could become an addiction. See the governments using words associated with addiction when they print money to “inject” more “stimulus” into their economies. The printing addiction is perpetuated by government economists worldwide.

There are lesser-known consequences: for example, see this magnificent chart of the price of gold, in a decisive upside breakout to its all-time high! How could gold be in new high ground? 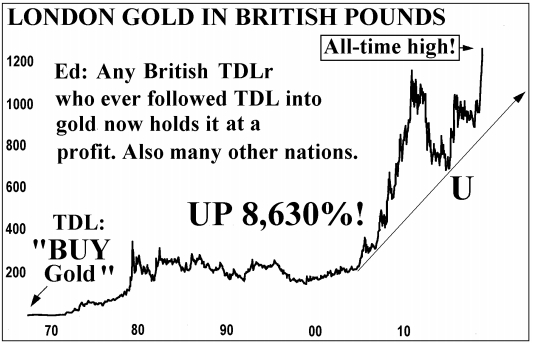 The reason this chart looks unfamiliar is that it’s the gold price in Britain denominated in pounds rather than the U.S. dollar! The price of gold varies by nations worldwide, depending largely on how much money it had overprinted, unmasking how diluted their country’s currency actually has become. Gold itself is a currency that cannot be diluted by the addiction of printing gold. To the contrary, the printing presses actually boost the price of gold, as shown in the chart! As we wrote in our Goldbug! book, “Gold is at the center of the monetary universe.”

Why then do nations print so much paper money? What’s the addiction’s payoff? The hyperprinting results in what superficially looks like “growth”! Economists and corporations love that because their rising financial numbers are deceptively seen as “growth.” Subtracting all that bogus paper money would reveal a truthful but less rosy view of the economy’s true value. In fact, all the paper money everybody owns is continuously being diluted, masked by what the government embezzlers call “inflation,” which they vainly seek to master. If a corporation comparably overprinted more of its own stock, it would be in the headlines, resulting in the stock market reducing a stock’s price by dilution. It’s actually illegal, described as “watering the milk.” In a famous legal case a trout was discovered in the milk, which was good enough evidence to have won the case.

The truth is, gold is real money anywhere. Also silver. Our recommendation on how to defend your savings? To us, it’s not rocket science. Obviously, for our subscribers, the way to foil the dilution of your paper money is to own some gold and silver. Switching some of your paper money to gold could be your long-term financial salvation, a view proven by the huge profits (in paper money) since gold was $35 (and silver was 92.5 cents) — a rise far from over, and still in what we have baptized a “Super Major” bull market.

How do governments get away with just printing more? Many people rarely get to see this chart (below). As with the charts that we've often shared over the years, TDLers can observe the buying power of gold graphically, which is a very insightful method.

King Gold had been out in the cold; but will regain its long-term upmomentum as the reckless overprinting of paper money continues worldwide. America has been printing less paper than other nations, so TDL has been temporarily bullish on the U.S. dollar.

The price of gold has been up for the last four quarters. Also this rise has been abrupt, so a short-term profit-taking pullback is likely. We doubt gold’s decline would be deep. We suggest trying to buy near the lows of the choppy, lateral motion we expect in the coming period.

We’re not at all picking on Britain’s currency in the chart. Downtrends are actually apparent for every paper currency in the world relative to gold. And the crackpot Keynesian economics used by all government economists will someday be better understood by the public, who will correctly dump it. To us, a sound, honest currency is fundamental to a truly healthy economy, worldwide. That’s just common sense.

Gold’s strength has already begun to be noticed in the world’s mass media, as it has edged stubbornly higher. Rises in charts reveal an inversely declining value of paper against each ounce that the tangible yellow metal represents. We predict the next phase of discovery will be silver for our explicit reasoning on why and how this printing addiction would end. Meanwhile, the charts of gold stocks demonstrate how our long-term strategy has already been working. And this gold wave has only just begun.

One bullish clue is TDL’s old discovery that precious metals run in a type of “wolf pack.” For example, palladium’s repeated new all-time highs have led the whole group higher. Even little rhodium has made a new high — a powerfully bullish confirmation to gold, silver, and platinum.

However, within gold stocks’ longer-term rises, recent days actually show dips. Many shallow investors, stung by declines in other areas, are selling their own gold and silver ETFs, which, in turn, must sell their gold stock holdings. Many of those flip-floppers will be repurchasing later, at higher prices.

Bottom Line: We’re holding our precious metals. The truth is what lasts, and sadly the truth is not the same everywhere.