In a rare public appearance this past weekend at the 2017 World Outlook Financial Conference in Vancouver, Mr. James Dines told the packed crowd:

"The last downcycle in raw materials was particularly vicious, from around 2011 to 2016, with many mines having closed, layoffs, stock market losses — virtually everybody got hurt in recent years, and investors were understandably utterly demoralized.

The good thing is wealth in the ground always lasts, even though profits from them are cyclical. I think this cycle of the commodity bear market is over. So I’m optimistic."

Those are important words coming from one of the most legendary financial forecasters in the business. Mr. Dines had his readers in gold and gold stocks when the yellow metal was at $35 per ounce. When it hit $850 Barron’s dubbed him “The Original Gold Bug” and called it “one of the most fantastic investment calls on record.” 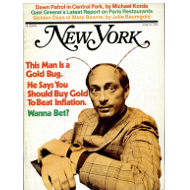 Point is: Listen to this man. 60 Minutes has. He was a featured guest. The New York Times has referred to his predictions as “truly magnificent.” He’s graced the cover of New York magazine, calling for people to buy precious metals at a time when the mainstream thought he was crazy.

And Mr. Dines is still nailing it, spot on. That’s why he packed the house last weekend.

He also made one of his boldest calls yet.

Mr. Dines contends that we’re entering the “third wave” of a Super Major Bull market. Wave I took the metal from $35 per ounce in the mid-20th century to $800 in 1980, when Mr. Dines told his readers to sell.

And then, of course, we entered the nasty bear market that Mr. Dines now says is over. 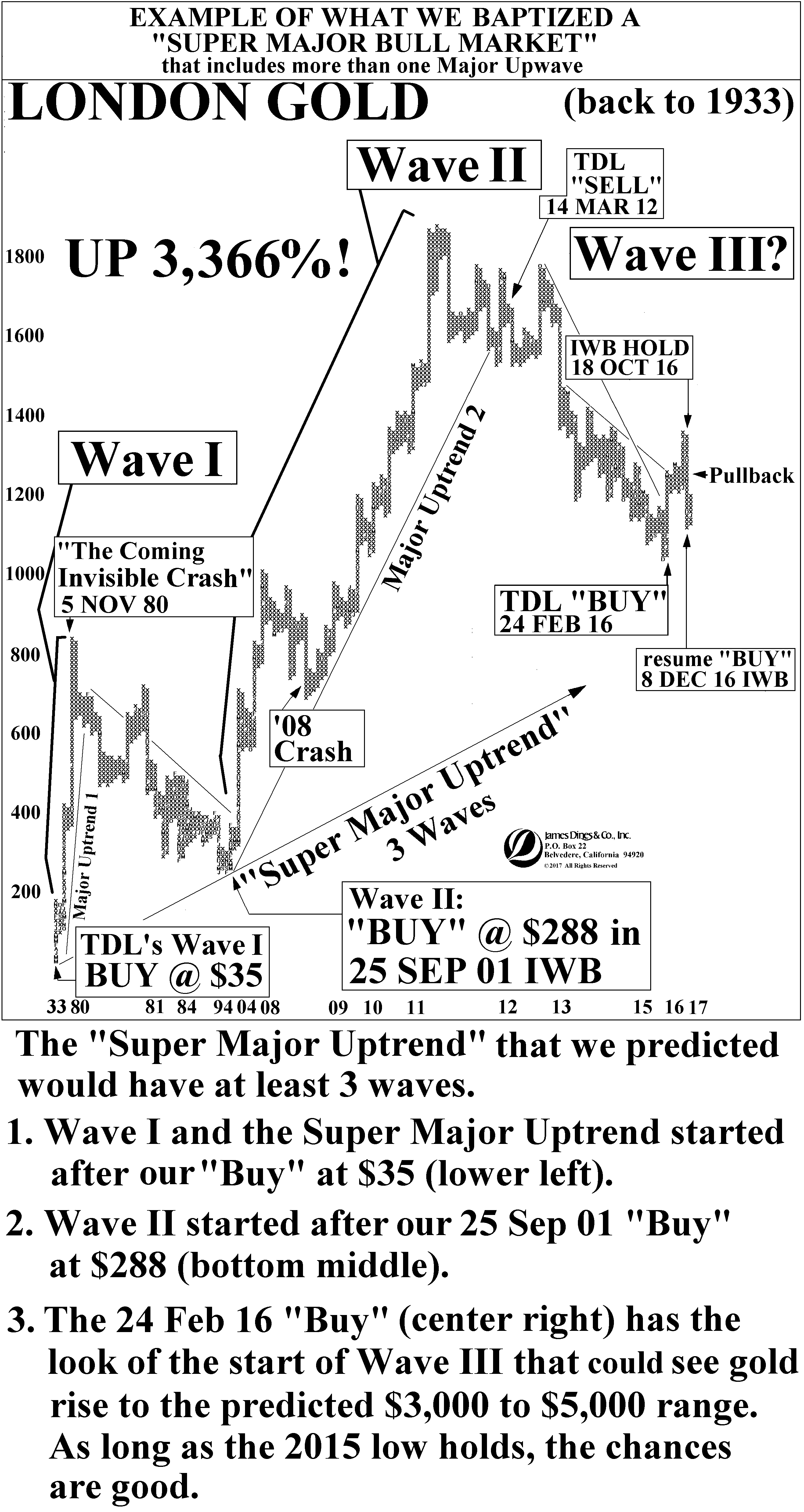 But he took it a step further. Openly admitting that he did not expect anyone to believe him (like when they didn’t believe him when gold was at $35 or Apple was at $0.445), he said:

“Silver at $17 an ounce looks like the single most underpriced metal on the planet. We predict that silver will go above the price of gold, and also that that will be the time to sell both. Silver’s catch-up to true value will probably happen during a currency upheaval and be awe-inspiring to behold!”

As Mr. Dines often says in issues of his Dines Letter: Believe the unbelievable, or not.

Again: listen to this man. 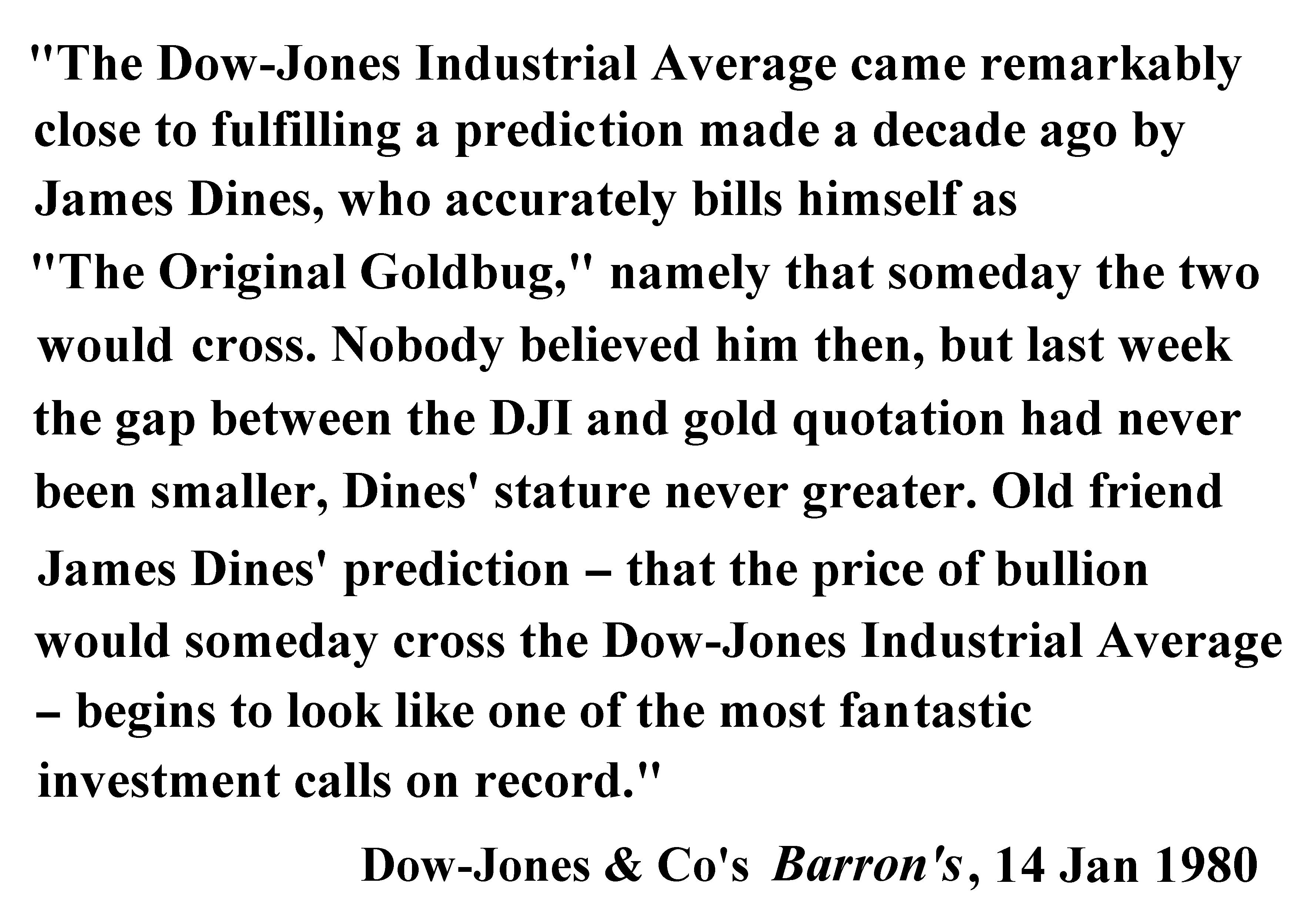 Mr. Dines is so convinced of the coming Wave III that he has abridged his best-selling book “Goldbug!”.  He wants as many people as possible to be aware of — and profit from — what he sees as the “coming greatest transfer of wealth in recorded history.” 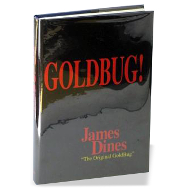 We’re giving it away for free.

But not only that.

Mr. Dines has also curated a select gold and silver portfolio that you can have access to. His past wins in the precious metals space include:

His current portfolio contains the names and ticker symbols of the stocks Mr. Dines believes are set to rise as this gold bull market continues its inevitable march upward.

That, along with many of his current predictions — including a warning on currencies and debt — can be found in this rare video.

Reintroducing Mr. James Dines & The Dines Letter: Warning from a Financial Newsletter Legend
Readers should heed this urgent financial warning from the "Original Goldbug", Mr. James Dines. This isn't the first warning he's made...
An Urgent Warning from The Dines Letter
Mr. Dines has long warned that cutting the dollar’s link to gold would lead to a crash. Unfortunately for America, our backs are up against the wall. Mr. James Dines has an urgent warning for all...
Caution: Bond Crash and Gold Spike Ahead
I have a very special interview for you today. It’s with Mr. James Dines, long-time editor of The Dines Letter and widely regarded as the father of the financial newsletter industry.
A Terrifying Threat Too Real to Ignore
Back in the 1950s James Dines walked into his office at 18 Wall Street, New York, NY, and was promptly told to pack his things. He’d been fired for making bullish gold predictions.
Investing in Marijuana Without Getting Burned
The marijuana industry has rewarded scores of investors with life-changing gains.