The war in Ukraine took a surprisingly pleasant turn this week when Ukrainian forces conducted a counteroffensive to reclaim three major cities and huge tracts of land that had been occupied by Russia.

In all, Ukraine has retaken about 3,500 square miles of territory from Moscow’s forces in the Kharkiv region.

In many cases, Vladimir Putin's troops fled before the Ukrainians even got there, speeding away in tanks so fast that they ran into trees. Others stole cars from the civilian populace and just drove off.

Now, let me be clear upfront: The Ukrainian military, from its top generals to the grunts on the ground, deserve the lion’s share of the credit for this success. They have fought a hard, thoughtful campaign to repel an enemy with far greater resources.

Still, there is absolutely no way Ukraine would be in the position it’s in today without U.S. military assistance.

The U.S. has furnished Ukraine with $14.5 billion in military equipment since February and more is on the way — maybe as soon as this week.

The standout stars of these aid packages have been Javelin anti-tank missiles, Stingers, and HIMARS (High Mobility Artillery Rocket Systems).

Stingers have been essential in blunting Russia’s air force. They use an infrared camera to track the heat generated by a target’s engine and establish an ultraviolet fingerprint to distinguish that target from other heat-emitting objects.

Once it’s locked on, the image sensor tracks the target’s flight path and the guidance system adjusts the missile’s course accordingly. This allows it to lead the target.

Stingers can hit targets flying as high as 11,500 feet and have a range of about 5 miles.

Javelins are shoulder-fired anti-tank systems. They entered service in 1996 and have a range of 2.5 miles. Like the Stinger, the Javelin locks on to a target’s thermal picture and homes in on it.

However, the Javelin deploys in stages in which a pair of high-explosive antitank (HEAT) warheads explode against a tank’s reactive armor shell, opening a path for a third warhead to reach the target’s main armor.

And HIMARS consist of a rocket launcher mounted to a truck with a pod of six 227-mm guided missiles. One of their key advantages (in addition to their mobility and precision) is their range, which is about 50 miles.

Ukraine has had a lot of success with them because they can sit beyond the reach of Russian howitzers and blow them up. They’ve also been extremely effective in destroying enemy ammunition depots, transport hubs, and command centers.

According to Joint Chiefs of Staff Chairman Gen. Mark Milley, in addition to the weapons systems themselves, the U.S. has contributed thousands of rounds of ammunition that have been used to neutralize more than 400 Russian targets behind enemy lines.

"They've had devastating effect," Milley said. "Russian lines of communication and supply channels are severely strained. It is having a direct impact on the Russian ability to project and sustain combat power. Russian command and control in the headquarters have been disrupted, and they're having great difficulty resupplying their forces and replacing their combat losses."

Furthermore, the sophistication and effectiveness of these weapons stand in stark contrast to the Cold War-era weapons.

Back in April, I had a bit of fun at the expense of Russian fighter jets.

“Did you hear about the Russian jet that crashed outside of Kyiv?” I joked. “It ran out of coal.”

At the time, Russian jets were being blown out of the sky with astonishing frequency, in part because the unguided missiles they carried forced them to fly low to the ground to hit their targets.

Similarly, Ukrainian officials say one of Russia’s most advanced attack helicopters, the Ka-52 Alligator, can be brought down with standard 7.62-mm machine gun fire.

As a result, the Russian forces have been sitting ducks for Javelins and Stingers, which have been used to evaporate over 10,000 Russian war machines.

And now that most of Russia’s best equipment has been captured or destroyed, Putin has had to dig even deeper into warehouses for old Soviet equipment that isn’t any better suited to the task of conquering Ukraine.

"All of our weapons are from the times of Afghanistan," one captured Russian soldier lamented.

One recent photo even showed a garbage truck that had been retrofitted into a personnel carrier. 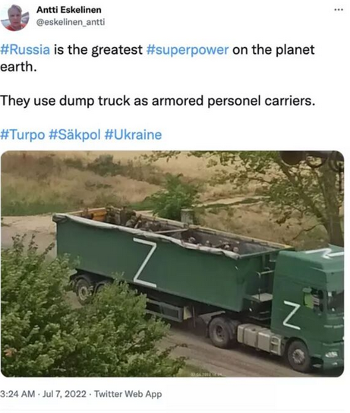 No doubt, the war has taken an ugly turn for Russia — so much so that criticism of the effort has started to bubble up even on Russia’s tightly controlled state-run media.

Many of the country’s hawks are now calling on Putin to fully mobilize Russian forces and draw on the 2 million soldiers it has in reserve. But almost none of those “soldiers” are actively trained or prepared for war.

Indeed, the country has already burned through its fully trained and recently released reservists and even gone so far as to tap its prison population for bodies.

And even if Putin does conscript more soldiers, it’s not clear what equipment they’d man. That barrel has been scraped so hard that Russia is now buying weapons from North Korea and Iran.

Meanwhile, the only thing keeping U.S. defense contractors from fulfilling the surging demand for their weapons has been supply chain issues.

But make no mistake: Once those supply chain issues get worked out, all of these companies are going to start filling orders, dropping a massive money bomb on to their balance sheets.

The United States has already laid the groundwork for the largest defense budget in its history — not just to advance our military capability but to backfill all the supplies we’ve dispatched to Ukraine.

Meanwhile, the success of American weaponry in Ukraine has drawn a lot of attention from our allies in Europe and elsewhere. They’re all raising their defense budgets too.

So I highly encourage investors to take advantage of the current market weakness and load up on American firepower now.

You can even get my latest report on a key hypersonic missile component manufacturer here.