It's a New Era - And These Three Stocks Will Dominate

We’re on the precipice, the verge of a new era.

It’s already begun, but it’s yet to fully take off (no pun intended).

It’s the age of the drone.

Criminals are using them to sneak drugs and other contraband into prisons.

They’re used for dangerous search and rescue missions, venturing into burning buildings and forest fires to locate survivors and pull people to safety.

Researchers at the Tasmanian Institute of Agriculture have developed a “Lambulance” drone that acts as an ambulance for lambs.

History was made earlier this year when Brianna Smith and her two-year-old son, Jack, used a smartphone to order ice cream and a popsicle. Six minutes later, a drone hovered over their lawn, delivering the delicious treats.

Indeed, the Smiths were part of a Federal Aviation Administration-approved test that, for the first time, allowed drone flights over congested residential areas well beyond the view of a ground operator.

The test proved, beyond a shadow of a doubt, that drones will soon be delivering goods directly to people's homes almost instantaneously.

I’m sure you know that autonomous, self-driving cars are in the works.

But did you also know that Boeing is working on an autonomous plane?

No doubt, there’s a whole host of civilian applications for drone technology.

And that alone presents a compelling investment opportunity.

But nowhere — NOWHERE — is this technology more important than in the military.

Drones are the future of combat.

As I said, they’re already being used to perform aerial reconnaissance and bomb terrorists.

And it won’t be long before self-driving tanks are joining manned formations, and submersible drones are patrolling the seas for mines and submarines.

I know, because I’ve seen this technology up close.

In April, I attended the Army Robotics Conference in Springfield, Virginia.

Not that you would doubt me, but here are some of the pictures I took… 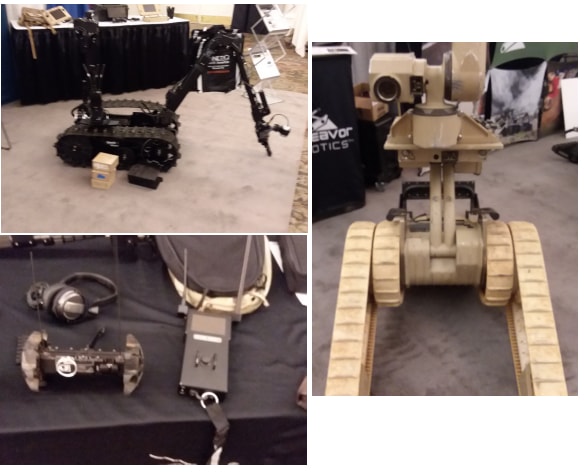 And that’s just what I was allowed to photograph.

I learned a ton about drones and robotics — about how they’re already being used for surveillance and perimeter defense, and being deployed in convoys to transport food and munitions to troops at forward bases.

But maybe the most interesting thing I learned was how much money is pouring into the sector. 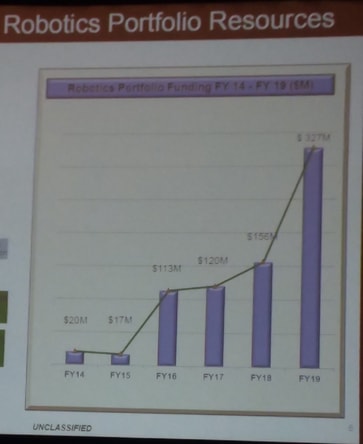 This one may be the most interesting of the bunch.

It shows a chart of Army robotics spending over the past six years.

And that’s just through 2019. Projections from 2020 all the way into 2030 figure to be way, way higher. Because the United States Army is serious about drones.

So are the Navy and Marine Corps.

I went to the Expeditionary Warfare Conference in Annapolis last month. There was plenty of buzz about drones there, too.

The Navy wants them to hunt submarines. And DARPA has already developed a prototype — the Anti-Submarine Warfare Continuous Trail Unmanned Vessel (ACTUV), aka “Sea Hunter.” 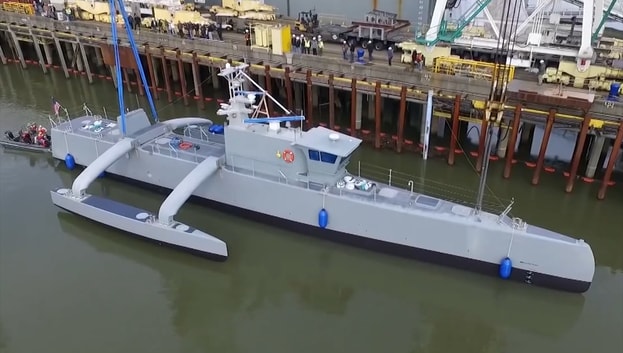 The Sea Hunter has huge advantages over manned vessels. The biggest is that it can stay at sea longer because it doesn’t need to restock provisions for a crew. It’s also smaller and harder to detect.

But perhaps most importantly, it keeps our warfighters out of harm's way.

And that is the key advantage of any unmanned vehicle. It’s not just the flexibility, the increased range, or the artificial intelligence. It’s that these robots keep our warfighters safe.

For example, a few years ago in Afghanistan, terrorists attempted to attack a U.S. military checkpoint by slamming into it with a car packed full of explosives.

But what they didn’t know was that this particular checkpoint had been equipped with drones — defense robots — that were able to take off and destroy the speeding vehicle while it was still three miles away.

As many as 850 soldiers were saved that day, alone. More than 1,000 soldier lives are saved by drones every year.

No question, there are fewer things more tragic than death in the line of duty.

And sadly, some 3,500 coalition warfighters have been killed by IEDs and roadside bombs in Afghanistan.

But the good news is that number will continue to shrink as the military deploys more and more drones — robots that can disarm or detonate bombs from a distance, that can explore sewers and tunnels and search underneath cars and trucks.

When people think of drones in combat they immediately think of death machines whizzing through the sky to take out terrorists. But that’s only a small part of what drones in today’s military actually do.

The truth is, these are life-saving machines.

They’re used to do all of the things I mentioned, as well as simulate enemy attacks to better train our forces.

And that’s why I sought out the very best investment plays in this field.

I was only looking for one company that could make a fortune for investors, but I ended up finding three.

These stocks are the very best plays in the field. They’re at the cutting edge of this robot revolution. And I’m truly excited to share them with you.