Is Nancy Pelosi Going to Jail?

The Feds are hot on her trail.

The American people are chasing her with pitchforks.

That's because the Pelosis continue to profit from the stock market using material nonpublic information.

In other words, they're committing insider trading in broad daylight.

But no one can do anything about it because members of Congress wrote laws to protect themselves against punishment.

Insider trading, of course, is trading stock based on private knowledge.

Say the CEO of a tech company is about to sign a deal with the military and tells all their friends and family to buy stock alongside them.

If that information isn't public, they could get in a lot of trouble: a $5 million fine and 20 years in prison.

For members of Congress, it's a fine of a couple hundred dollars.

So you can see why people are upset.

How can we trust our own leaders when they blow it off like it's no big deal?

They're making millions while the rest of us suffer under inflation and a recession.

In just the last few months, Paul Pelosi's made tens of millions of dollars trading in and out of stocks and options in the hottest tech companies.

He must be one heck of a stock picker.

Or does he have information the average investor doesn’t?

After all, when you buy million-dollar call options, you’ve got to be darn sure that stock is going to move in your favor.

And with Paul, it somehow always does.

So how does he know the direction individual stocks will go?

Nancy Pelosi has access to private, firsthand knowledge of all Washington's secrets.

She knows what bills are going to pass and what companies will benefit from new laws.

But despite what you may hear, Nancy doesn’t trade stock.

She’s required by law to report her husband's stock transactions, however.

All these transactions are available on the Office of the Clerk's website in what’s called a political disclosure form.

Here’s the trade that has the mainstream media up in arms: 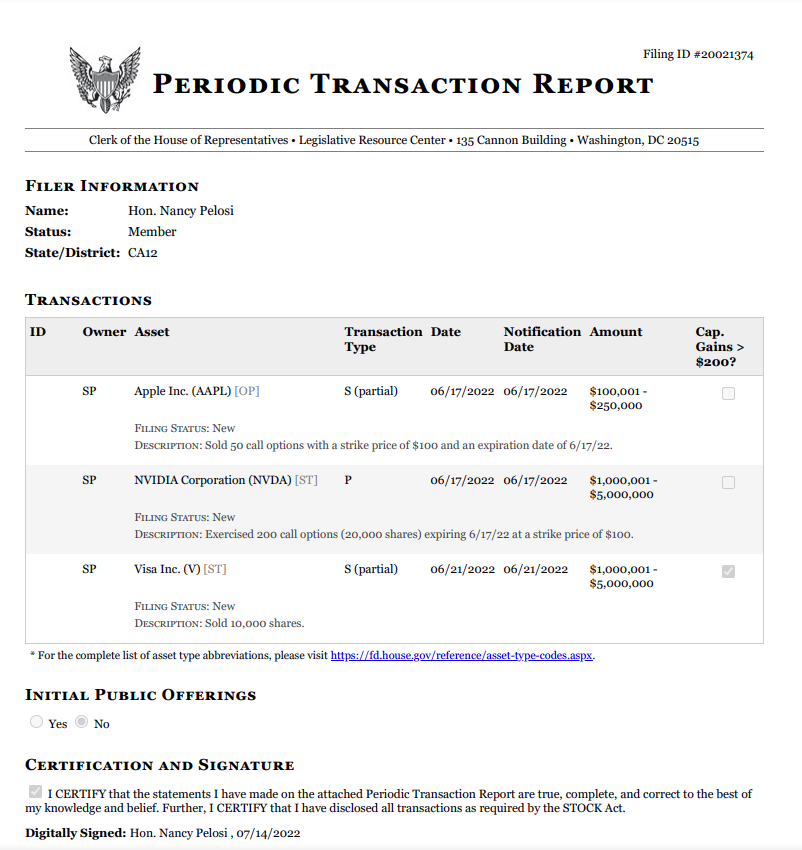 You can see that Paul made a strategically timed NVIDIA purchase, and he had his secretary — er, wife — file it on July 14.

While it's true Nancy didn't make these trades herself, it's more than a little curious that her husband made this multimillion-dollar trade conveniently close to when the new CHIPS and FABS bills are passing through Congress.

When Nancy signs a bill, she's essentially writing herself a multimillion-dollar check.

On this trade alone, Paul has made a cool million and counting...

You could have followed these insiders to try to make some quick cash last week, but the problem is these forms are filed months after the stock trades, so you'd have been left holding the bag.

But subscribers to my Insider Stakeout trading service have known something big was happening with computer chips for months, and we’re uniquely positioned to profit off the CHIPS and FABS bills.

How did we know about this well ahead of the mainstream media?

Because my readers and I stake out the insiders on a daily basis, leading us down the road to surefire profits.

We get our intel and get positioned well ahead of the average investor...

Don't wait for the next national news headline to make your move.

Cut in line by joining me today and learning how to trade like an insider.