Is Gold Finally Ready to Break Out?

The World Gold Council (WGC) recently agreed that global investors will “continue to favor gold as an effective diversifier and hedge against systemic risk.” The rise in protectionist policies around the world is chief among the risks since they tend to lead to higher inflation and slower economic growth over the long term.

I agree and believe that gold will put in higher lows this year that provide a much more stable trading environment.

Before we look ahead let’s take a look at commodity returns for the past 10 years, courtesy of Bloomberg and U.S. Global Research. 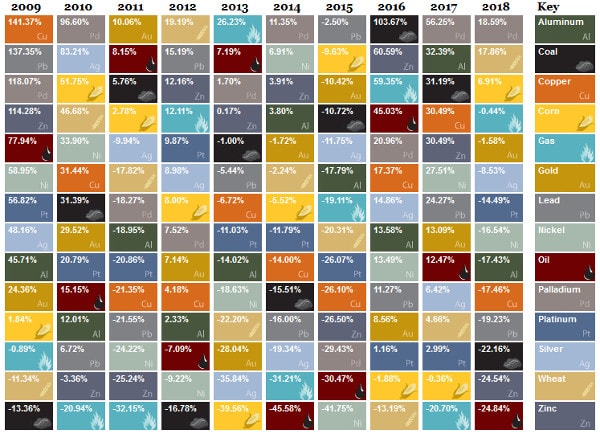 The commodity giant in the room — China — is now experiencing growing pains that will require compromises in the current trade spat with the U.S.

Copper has pulled back due to the trade tensions with China but those trade tensions are not sustainable and a resolution of the recent tensions will provide a snapback in copper prices that I suspect will catch the market off guard.

GDP growth in China is expected to slow to sub-6% in the first half and for the full year to come in around 6%, down from 6.6% in 2018, as reported recently.

Numbers reported by China are always met with skepticism. One indicator I like to look at is energy consumption, which is trending just under 2%, according to a recent Forbes article.

Gold has also once again captured the attention of the mainstream, which leads me to believe we will indeed have a better gold market, but I expect that to happen in the second half of this year.

Fitch Solutions commodities analyst Sabrin Chowdhury recently noted that “the expected rebound in gold was already playing out and that the price should reach 2013 highs, averaging around $1,300/oz this year, with investment flows into safe haven assets increasing as dollar strength, market volatility and the trend toward protectionism continues.”

I don’t believe in peak gold and I don’t put much faith in gold/silver ratios or any of the other esoteric metrics that people only seem to refer to when they’re right, because this time is different.

It’s why everyone is counting on a weaker dollar to be the fuel that sends commodities and, specifically gold, higher.

It may play out that way but I don’t see that being the case. I see an environment where gold and the dollar take off together — initially — while contagion overseas sends capital home here to the U.S.

Doesn’t mean it’ll be that way forever. The dollar will do what all currencies do but not before one last ride higher that causes a storm and provides the energy we need for gold to get on a bull run for the books.

The 2019 Metals Outlook
2018 has been a challenging year for those of us who speculate in the junior resource space. But, despite one of the toughest years I’ve ever seen, there’s a lot to look forward to in 2019. This is the Metals outlook for 2019...
How to Invest in Gold: An Overview
With gold having finished 2018 and starting 2019 very strong, it is now back in the headlines. Investors are starting to look to gold but aren't sure where to start. Outsider Club founder Nick Hodge explains how you can gain exposure to gold and gold stocks...
Heal Your Ailing Portfolio Body