Investors Are Piling Into This Gold ETF

Gold is really heating up.

The metal touched a two-year high in July around $1,380 per ounce.

There's been some volatility, for sure. And that will continue as the Federal Reserve continues to waver on monetary policy. But gold's underlying strength is quite real.

That's perfectly evident if you look at the money-flows.

Holdings in exchange-traded funds backed by gold climbed by 13.8 metric tons in the first two days of this week, topping the 13.7 tons added in all of August, according to Bloomberg data. That drove aggregate open interest in futures to the highest in six weeks. 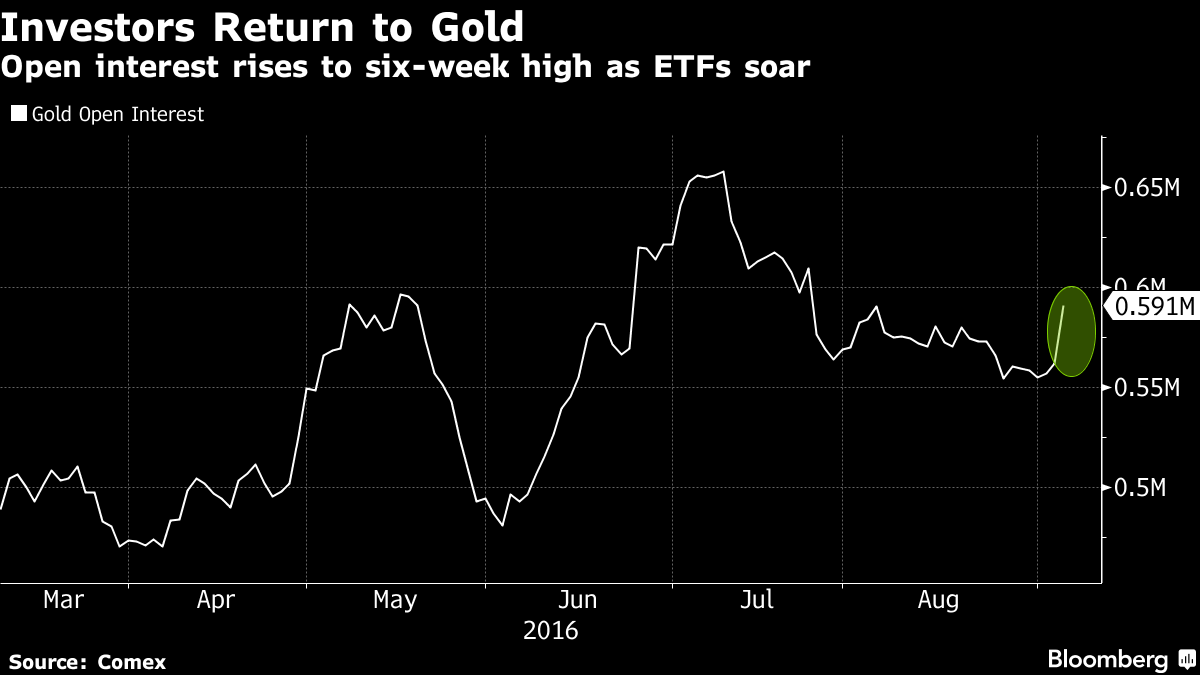 The SPDR Gold Trust ETF (NYSE: GLD), alone, took in $607 million on Tuesday, according to FactSet Research Systems Inc. The amount of gold held by the trust is now approaching 1,000 tons. 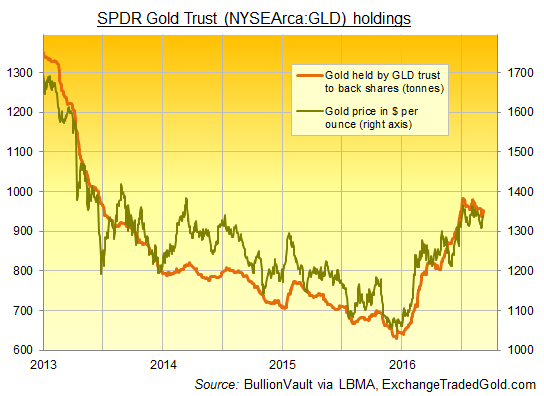 Purchases of physical bullion are up, as well.

Holdings at BullionVault climbed to a record 35.7 tonnes this week. Net purchases on the trading platform increased by half a ton (470kg), the most in four years.

In all, gold demand rose 15% in the second quarter, compared to the same period last year, according to what the World Gold Council said Thursday.

This was mostly due to U.S. influence. U.S. bar and coin demand was up 101% compared to the same period last year, tracking economic and political uncertainty.

What the report called the “customary powerhouses” of China and India saw large drops in jewelry demand in the second quarter, falling by 15% and 20%, respectively.

However, the report also noted: “Whilst investment is currently the largest component of demand, we see a gradual return for the jewelry market in the second half of 2016.”

Indeed, jewelry demand is once again ramping up in Asia.

Physical gold demand in the region improved slightly this week as a correction in prices prompted consumers to buy for the upcoming festival and wedding season.

“Sentiments have improved,” Kumar Jain, a jeweler in Mumbai, told Reuters. “Retail buyers have started making small purchases for Ganesh festival. Some buyers are even making purchases for weddings."

Meanwhile, in China, total gold bar reserves at the People's Bank rose to a record 1,833.5 tonnes. China has the fifth-largest national hoard behind France, Italy, Germany, and the United States.

These are short-term statistics, and they will continue to fluctuate. But to think they're temporary would be a mistake.

The increase in demand we're seeing is part of a much larger gold cycle.

You see, before gold can go on one of its epic runs (like the one it experienced from 2000 to 2010) it has to have its bear phase.

The metal has languished in just such a phase these past few years, but it's clearly hit bottom.

Its return by this point was well expected.

A year ago MarketWatch reported that "while gold won't make much headway in 2015, things will start to turn around in 2016."

And in early 2015, Chintan Karnani, chief market analyst at Insignia Consultants, predicted a big run in 2016.

"Gold will see another parabolic bull run from July 2016. Gold investors need to have the patience and not get scared by more price falls." Those analyses have proven accurate. As I mentioned at the top, gold just had its biggest first-half price increase in 26 years.

The fact is, years of low prices and depressed demand drove many unprofitable miners out of business. Supplies have contracted, as a result.

That's left the market somewhat bereft in a time of negative interest rates.

It's not clear how far gold will go from here, or how labored the recovery will be. But it is clear that prices will continue to rise over the long term. Growing demand, shrinking supply, and expansive monetary policy will see to that.