Written by Dennis Slothower
Posted May 26, 2018

Stocks rebounded slightly on Wednesday following the Fed FOMC minutes. Initially, the stock market was down 150 points or more but, whenever the Fed is making statements or having FOMC meetings, the government seems to step in to stabilize any emotional impact from its statements to neutralize the markets.

The Fed said it would be content to let inflation briefly run above its 2% target as the economy continues to recover. The Fed also acknowledged that if energy prices continue to climb, U.S. inflation would be boosted by the direct effect and pass through because of higher energy costs. We are about to get an inflation spike.

The Fed made it clear another rate hike was coming in June. The U.S. dollar rallied on this news. However they may spin it, the Fed will keep raising interest rates until something breaks.

While the Fed may not be worried about the economy overheating, (you should be!) rising interest rates, rising energy costs, a rising dollar, rising mortgage costs, rising wages and their impact on business profits, rising inflation, etc. all undercut the economy.

In the meantime, it is becoming more and more apparent that capex growth is decelerating.

More and more companies are resorting to accounting tricks to generate earnings. In fact, economic earnings, the true cash flows of businesses, declined by 17% in 2017 and hit their lowest levels since 2010! 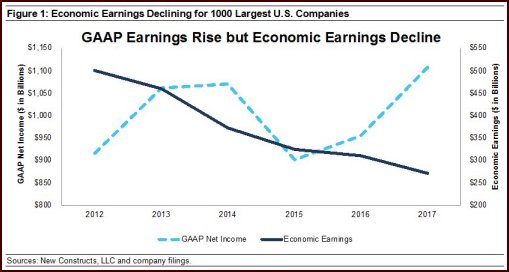 This is causing more and more companies to buy back company shares to generate financially-engineered profits.

The government may want to manipulate oil prices higher, hoping to create the illusion of growth, but it is going to have a hard time getting the GDP over 3% as energy costs cut deeply into both business expenses and consumer pocketbooks.

With global markets collapsing but the U.S. dollar rallying, foreign investors have been jumping into U.S. small caps, speculating on further growth, but this will soon prove to be a trap for them. Growth is about to slow down in the U.S. and it will soon catch up to the grossly overvalued small caps. (Russell 2000 has a P/E ratio of 90 times earnings!)

On Thursday, President Trump cancelled the North Korean Summit in June with Kim Jong-Un after negotiations broke down. The North Koreans are under heavy economic sanctions, so if they want to be belligerent, that’s up to them. But time is working against the North Koreans, given the economic stranglehold on their country.

Apparently, the North Koreans were unwilling to provide the diplomatic spadework needed for denuclearization the United States requires to secure this agreement, so the President pulled out of the deal until North Korea is ready.

Also on Thursday, Secretary of Defense Jim Mattis spoke to Air Force cadets and told them to “prepare for war.” Just the day before, Mattis told troops at Fort Bragg, N.C., that “storm clouds are gathering” over the Korean peninsula.

You would have thought this would have spiked oil prices, but just the opposite happened.

Crude oil prices (WTI) fell $1.17 per barrel on Thursday, then spiked downward over $3 on Friday, following reports that OPEC and its allies are considering “scaling back production cuts” to counter a possible shortage in global supplies.

In other words, OPEC will more than make up any oil production shortage that might be caused by taking away Iranian oil through sanctions.

On Thursday, President Trump signed into law a bill that would ease rules on most banks for the first time since the 2007-2009 financial crisis. The legislation eases oversight of all banks below $250 billion in assets and exempts small community banks from a host of stricter rules and oversight established by the 2010 Dodd-Frank financial reform law.

Well played, Goldman Sachs! There will be even less competition after this next recession given this extra rope to hang small community banks in the next financial crash. 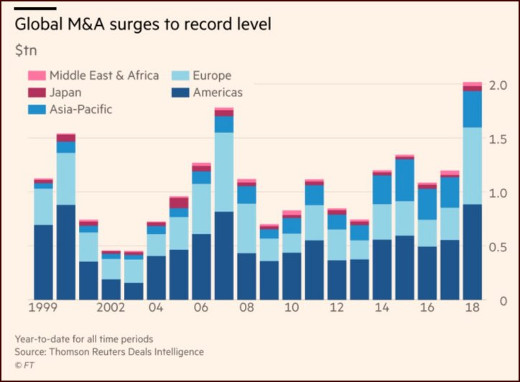 When business costs start jumping, companies look to merging with one another to save by economy of scale.

We are living in very turbulent times.