I Want to Be Honest With You…

But a few days ago, the Director of National Intelligence, John Ratcliffe, and the FBI held a press conference saying that Iran was behind the emails.

So apparently, it was all just another attempt at election interference that follows similar efforts from Russia and China.

I’ll take the U.S. intelligence community at its word, but it hasn't proven especially reliable either.

And that goes for the U.S. government as a whole, too.

There’s hardly a government agency that I trust out there.

And I know for a fact I’m not alone.

Amidst a pandemic that’s devastated our country, just 67% (roughly two-thirds) of Americans trust the Centers for Disease Control and Prevention.

Only 51% of the country trusts Joe Biden to provide reliable information on COVID-19, and just 40% trust President Trump.

And 62% of the country is afraid that the FDA will rush to approve an unsafe vaccine. 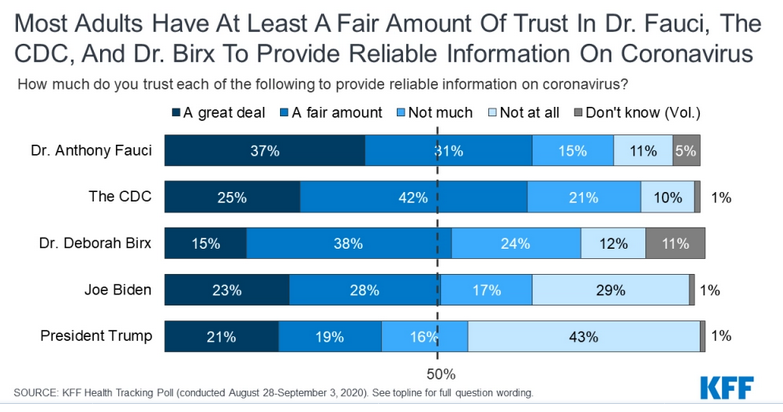 That’s a pretty scathing indictment of our leaders, but it’s also in line with a country in which just 17% of the people approve of the job Congress is doing and barely 40% trust the media (down from 55% two decades ago).

And listen, I don’t blame anyone for being skeptical.

Because I’m skeptical myself.

I’m not rushing out to get a Coronavirus vaccine the second it becomes available.

I don’t trust Donald Trump or anyone in his administration.

In fact, there’s not a politician or a government agency out there I do trust.

Heck, even when they’re actually trying to be honest, the institutions we rely on for information often prove to be wrong by virtue of their own incompetence.

I talked this distrust a few months ago with respect to inflation.

Back in the spring, the Commerce Department and the Federal Reserve were telling me and all of you that inflation was non-existent and “subdued” as we watched prices for everything around us skyrocket.

Maybe they were trying to mislead us…

Or maybe the formula they were using to calculate inflation was simply out of whack, because it was based on consumption data from 2017 and 2019.

So Americans have clearly learned over the years that our government is lazy, incompetent, and corrupt.

The media is sensationalist and fixated on things that don’t really matter. Instead of reporting facts, they’ve turned our public discourse into a spectacle that’s not meant to inform but rake in advertising dollars.

Wall Street has merged with Congress. There’s no daylight between the two — just a revolving door through which policymakers and lobbyists play musical chairs.

Well, I don’t want any part of that.

No one here at the Outsider Club does.

We’ve always sought to cut through the BS and help people take control of their own financial destiny.

And while we’ve undergone some significant changes these past few weeks, that mission remains the same.

That’s also why, in the weeks ahead, I’m going to be launching a new investment newsletter called Wall Street’s Proving Ground.

It will be, just as it sounds, an investment service that holds companies, executives, analysts, and the media accountable.

I’m going to scrutinize all of the data, information, and “conventional wisdom” in an effort to bring the truth to light.

You can look for that service now, but you’re not going to find it.

We aren’t yet taking new members.

That’s not to be exclusive, it’s just because I want to get everything right.

Because I want to be someone you can trust.

I want to be part of the solution — not the problem.

And for now, I just wanted to make you aware of that.

Because with so much propaganda, disinformation, ignorance, and BS floating around, honest, upfront information is in short supply.

The fact is, the government will manipulate you.

Wall Street will use you.

And billionaires will exploit you.

Just as it’s my job to call them out.

It’s my job to give you the kind of advice that will help you see through the charade and increase your wealth.

And you don’t have to take my word for it.