I Told You Not to Trust Elon Musk!

Just last week, I told you.

“Let’s not also forget that it wasn't that long ago that Elon Musk was smoking weed on a podcast, looking absolutely off his rocker, and being investigated by the SEC,” I wrote.

Well, if it wasn't clear then, it is now.

Yes, just two short week's ago, Musk assured investors that his company had no need for additional capital.

“It doesn’t make sense to raise money because we expect to generate cash despite this growth level,” Musk said on Tesla's fourth-quarter earnings call on January 29.

Well, this week, we learned that was a lie — or at least, to put it generously, a change of heart.

It signals something else, too, which is that Tesla still needs capital. It needs to spend, spend, spend, which means its first-ever annual profit could prove to be more of a blip than the new normal investors anticipate.

Just one hour before the announcement, Tesla forecast as much as $3.5 billion in capital expenditures this year. That would be a 164% increase over last year’s spending, which was pruned to save cash. 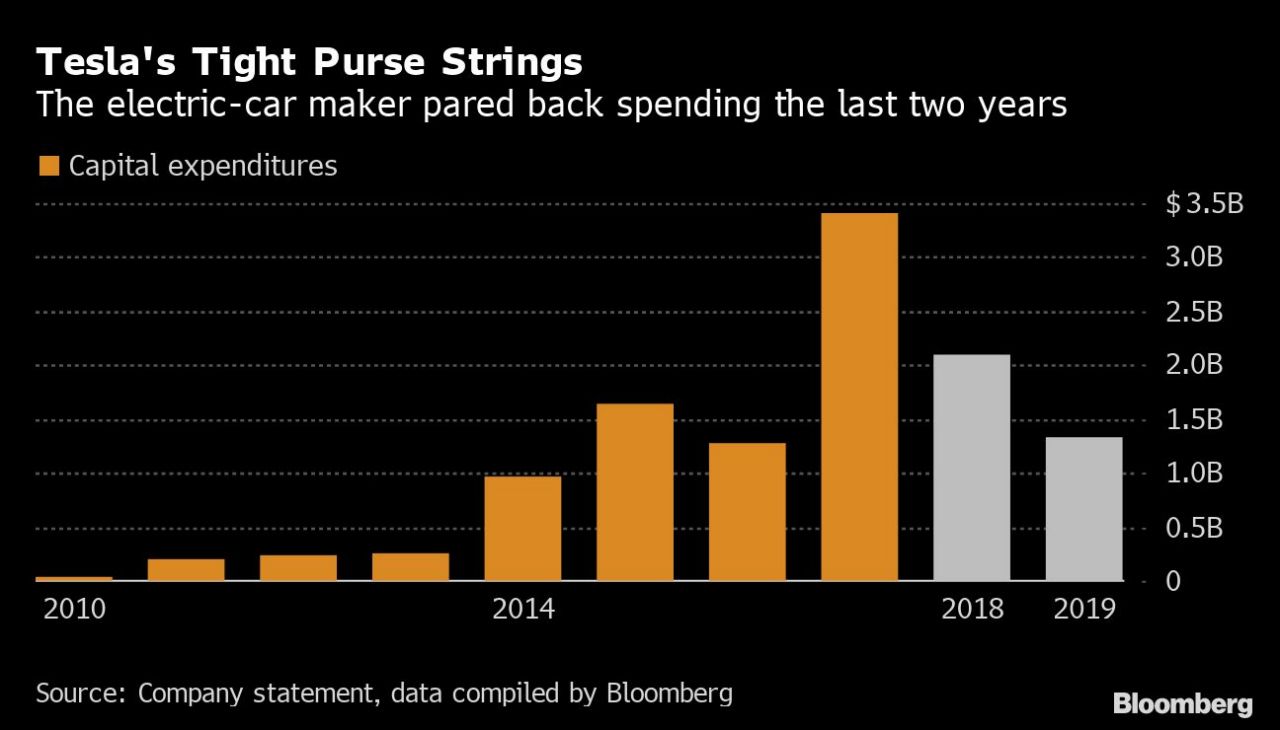 The $1.33 billion spent last year was well below its initial plan for as much as $2.5 billion. And that’s not sufficient to maintain Tesla’s lofty growth projections.

No, Tesla has a great number of expenses ahead of it.

It’s promised to build and start vehicle production at a factory near Berlin by the end of 2021.

It’s still building out its factory in Shanghai and supply chains in China.

And it’s also promised a “feature-complete” self-driving car, cheaper/more efficient batteries, an all-electric semi-truck, a next-generation Roadster, and the Cybertruck (the one with “unbreakable” windows) further down the line.

Tesla will also need money to hire more sales and service staff to gin up overseas sales, and to refresh its starving R&D apparatus.

“The company’s $1.3 billion in capex in 2019 fell short of the $2.5 billion guidance and a step up is needed to fund the roster of announced projects that have no facilities to house the production or target dates for launch,” said Kevin Tynan, senior autos analyst at Bloomberg.

The obvious need to boost spending could easily lead to “surprise” losses that much of Wall Street expects to be profitable going forward.

And what’s more is that many analysts, including our own Jimmy Mengel, believe advancements in other alternative energy sources could put Tesla even further back on its heels.

It’s cheaper, cleaner, and more efficient than the lithium batteries that Tesla and others rely on.

It doesn’t need costly input materials like lithium or rare earth metals, because it’s derived from the world’s most abundant element. It takes just minutes to charge, rather than hours. And unlike batteries, blue gas doesn’t degrade with each charging cycle.

Given all of that, Tesla is better avoided these days.

Because so far, neither the company nor Musk himself has proven especially reliable.

A Trillion Dollars in 10 Years?
On Monday, people betting against the electric car giant lost $3.1 billion. That same day, Elon Musk, the charismatic CEO of the company, made himself $4.4 billion. While people were focused on Tesla, Outsider Club editor Jimmy Mengel had his sites on another company...
Tesla’s Surge Doesn’t Impress Me – I’ve Seen Bubbles Before
Tesla stock has more than doubled so far this year… And Outsider Club editor Jason Simpkins couldn’t care less. He knows a bubble when he sees one...
Investing in Marijuana Without Getting Burned
The marijuana industry has rewarded scores of investors with life-changing gains.