I'm Even More Bullish Now Than I Was Before

A few weeks ago, when the 20-year Afghanistan project first started to circle the drain, my friend, colleague, and Crow’s Nest editor Jimmy Mengel asked me if I thought defense contractors would suffer as a result.

It was clear from his intonation that he thought they would.

I think my response caught him off guard because it was an emphatic "NO."

And I have every reason to be.

You may wonder how when this costly boondoggle, this $2 trillion trough (remember when the $2 trillion COVID stimulus was considered MASSIVE?) is no longer there for defense contractors to drink from.

First, the big misconception (and I've seen this all over social media) is that defense contractors are the primary recipient of that money.

In truth, most of that money is spent on logistics — the needs of troops, such as food, clothing, housing, medical care, special pay, and benefits. In 2011, when the U.S. effort was at its most robust, we had 110,000 troops stationed in Afghanistan. And even after NATO formally ended its combat mission in December 2014, the alliance still retained a 13,000-strong force to help train Afghan forces and conduct counter-terrorism operations.

Supplying and sustaining that kind of force halfway around the world for two decades amounts to a tremendous fiscal burden.

There were a plethora of other money drains, too.

Official data shows that since 2002, the U.S. has spent $143.27 billion on reconstruction activities in Afghanistan. Nearly $36 billion was allocated for governance and development. And $19 billion was flat out lost to corruption, waste, and fraud.

So the notion that this war was some massive firehose blasting profits directly into the pockets of Big Defense is a lazy misconception manufactured by hippies.

Unfortunately, it's been a contagious smear, which has led Jimmy and many others to (quite fairly) surmise that the war's end will be some massive blow to the military industrial complex.

I assure you it won't be.

And that's perfectly clear if you just take a look at our nation's defense budget.

When Donald Trump left office he did so after raising our defense budget to its highest point in history — $705 billion.

And what did sweet old "Helicopter Joe" Biden ask for this year?

Firstly, because pouring money into defense is a crowd-pleaser.

When polled last year, half of Americans said they regarded record U.S. defense spending levels as "about right" for the first time in 50 years of Gallup asking the question. 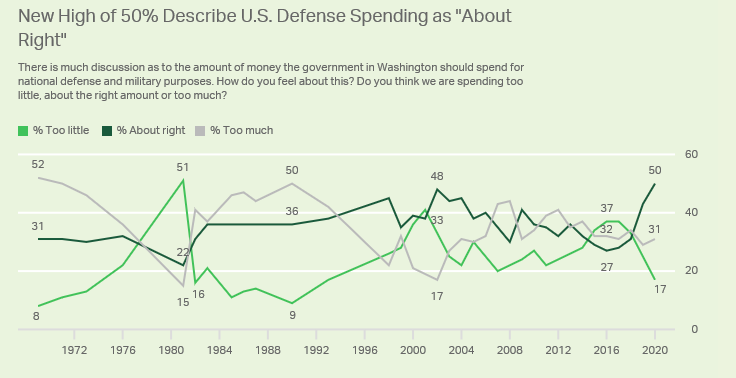 It's also a major engine of employment. The aerospace/defense sector accounts for more than one million jobs and more than 10% of our country's manufacturing demand. Those jobs aren't just confined to red states, either. They're scattered across the country, from the DC metro area to the deep South to the Pacific Northwest.

That's a big reason why defense spending gains so much bipartisan traction: Both Democrats and Republicans have huge constituencies that depend on defense contractors for their livelihood. Building a $12.5 billion aircraft carrier isn't just a matter of defense; it's an infrastructure project in and of itself. It supports an entire supply chain.

And while critics are quick to point to the industry as a budget drain, they'd do well to remember that military sales are a major source of U.S. export revenue.

People always say America doesn't make anything anymore and that we import everything from China. Well, the defense market is a notable exception to that statement, as the United States dominates 37% of the global arms market, raking in $55 billion per year in foreign military sales.

Finally, I'll leave you with this grim reality...

Our leaving Afghanistan is undoubtedly the right thing to do at this point. But it's not going to make the world any more stable.

The new government run by the Taliban is going to be eager to cozy up to Russia and China in an effort to gain allies and carry on the cold war that's clearly developed with the United States and the West. Those countries will be happy to have a foothold in the region that we've dominated for decades.

There's also likely to be regional strife with the likes of Israel, Iran, Saudi Arabia, etc.

And Afghanistan could also devolve back into a hotbed of terrorism.

All of this is part of the larger trend, the grand trend, of waning U.S. dominance.

Make no mistake, the United States is an empire in decline. But we're not going to go down without a fight.

And that's why defense spending is going to stay at least at its current level and probably increase for years, if not decades, to come.