I'll Promise You One Thing...

I've been in this business a long time. I know better than to promise a sure thing.

And yet, I am fully prepared to do it in this one instance...

Here's what I'll promise you: Gold is going higher.

There's just no way it's not.

And that's just to name a few.

Both professional and retail investors are buying in.

The first half of the year saw record investment demand for gold, according to the World Gold Council (WGC).

So far this year, inflows into physical gold exchange-traded funds (ETFs) globally is around $12 billion.

ETFs globally recorded their seventh consecutive month of positive flows in June, taking global holdings in gold ETFs to an all-time high of 3,185 tonnes. Between June 2019 and June 2020, the total addition to holdings of gold ETFs across the globe was 659 tonnes. Of this, 307 tonnes were added to gold ETFs in North America and 316 tonnes in Europe.

Demand for gold from investors (including those buying coins and bars) was 539.6 tonnes in the second quarter, topping demand for gold jewelry, which registered 325.8 tonnes.

And going forward, nothing about the market or our current economic outlook is poised to change. 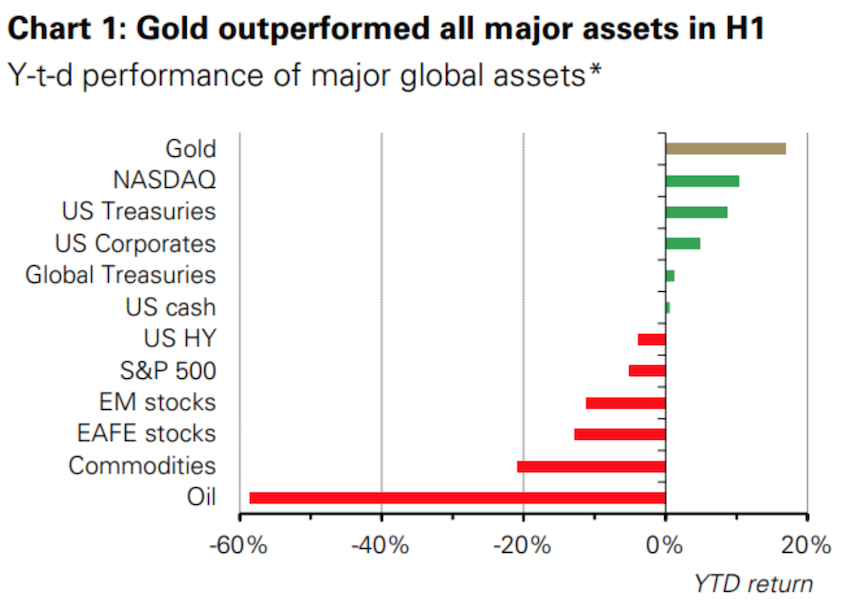 The Coronavirus continues to spread in the United States, wreaking havoc on spending and employment.

Our policymakers (the same ones who failed to foresee and adequately prepare for this epic meltdown) have no idea what they're doing.

Some $3 trillion in government spending was put to waste — mere window dressing on a disaster. Now they're squabbling over a second stimulus bill while emergency relief for unemployment and housing is set to expire.

The Federal Reserve and the European Central Bank balance sheets expanded to $14.03 trillion in an effort to buy the crisis off, but all they've really done is create a stock market bubble.

The S&P 500 is trading at 22 times its companies' expected earnings. That's the highest level in at least 18 years and nearing the record 24.4 on March 24, 2000, which was just before the dotcom bubble burst.

How can that possibly be justified?

Through June 30, there were more than 3,600 Chapter 11 filings by companies seeking court protection from their debts — a 26% increase over the same period last year. Bankruptcies surged 46% in June, alone.

Some of the names you may recognize: Chuck E. Cheese, Hertz, J. Crew, J.C. Penney, and Neiman Marcus.

U.S. GDP contracted by 5% in the first quarter, and economists are generally forecasting a 30% drop for the second quarter.

Yes, our economy has shed a third of its value and it's going to keep shrinking.

So if you think you may have missed the gold bull market, I assure you, you have not.

Especially if you invest in Nick Hodge's latest gold play.

He's found a small gold-mining company that's poised to rocket higher in the months ahead. It's trading for just 50 cents a share, but it's backed by none other than John Paulson, the billionaire investor who cashed in mightily on the last major economic collapse.

You can find the details on that here.

Like I said, I promise it's worth your time and promise is something that's sorely lacking these days.