How Will a Russian Default Affect YOU?

Russia is going to default on its debt.

It could happen as soon as next month, if not next week.

Russia’s next bond payment is due on March 16, but even with a 30-day grace period, no one in their right mind believes Russia is actually going to pay it.

In fact, it probably couldn't even if it wanted to.

That's because Western sanctions have barred Russian banks from accessing foreign currency markets and because the Kremlin has barred anyone inside the country from selling rubles. Furthermore, the ruble has effectively lost all of its value, which means trading it for foreign currency would be a difficult, if not impossible, task anyway.

And so there's really no way for Russian entities to pay interest on dollar- and euro-denominated debt. Again, that's even if it wanted to, which it doesn't. Because why would it?

This is why the entire array of global credit rating agencies issued broad downgrades to Russian debt earlier this week, with Fitch Ratings noting its view that “sovereign default is imminent.”

That statement accompanied a decision by Fitch to reduce Russian government bonds to junk status, cutting it from "BBB" to "B." Fitch also downgraded 100 Russian issuers, including 32 banks, their local and foreign subsidiaries, six government issuers, and a broad swath of companies across all sectors.

Meanwhile, Moody's Investors Services downgraded the Russian sovereign debt from investment-grade Baa3 to junk status B3 and lowered the ratings of three Russian mortgage-backed securities. (Tell me that term doesn't rekindle some nightmares.) It's also placed 32 financial institutions and municipalities and more than 50 companies under review for a possible downgrade.

And S&P Global Ratings was actually the first ratings agency to openly downgrade Russia, slashing the country’s local and foreign currency sovereign debt and its transfer and convertibility assessment to CCC-. Russia has also been labeled "CreditWatch Negative," which means S&P could downgrade Russian debt even further.

So what does this mean for investors?

After all, we know defaults, especially sovereign defaults, are bad. They nearly brought down the entire global economy a decade ago.

Will Russia's collapse cause a similar contagion?

Don't get me wrong, there will be consequences even for the average investor. But they should be pretty well-contained.

But defining that threat means parsing out the individual exposure.

So let's do that real quick...

Russia owes roughly $40 billion worth of euro- and dollar-denominated sovereign debt, approximately $20 billion of which is held by foreigners, the Financial Times reports.First off, as I said, Russia's default should be limited due to the relatively small scope of international exposure.

That's significant but not life-threatening, considering the exposure is diffuse. And because very few individual investors own Russian bonds, it's generally confined to major investment banks and funds which can stomach the loss.

For example, Pimco, a California-based investment firm, has $1.5 billion of Russian sovereign debt exposure. It's also sold $1.1 billion of credit default swaps (another blast from the past) of those bonds. That means it's on the hook to pay investors who bet on a Russian default.

That's a total of $2.6 billion in exposure, but that's really not much to Pimco, which has over $2.2 trillion of assets under its management.

Still, it's possible that numerous investment funds sold by Pimco or other firms could have found their way into an investor's portfolio or retirement account. 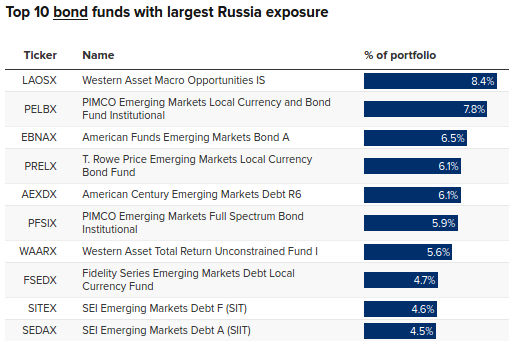 Similarly, and it almost goes without saying, investors should probably cut Russian stock exposure too, if they haven't already.

Again, few Western investors actually hold shares of companies like Gazprom, but it's not unheard of. And even if you don't own individual stocks, they might have found their way into an emerging markets fund or ETF like the iShares Emerging Markets Dividend ETF. 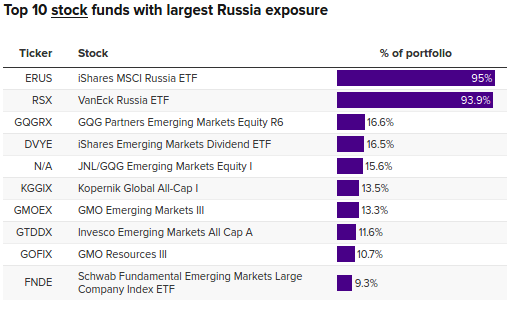 But if you've avoided those, then this shouldn't be a problem for you or anyone outside of Russia or its client states.

It's just another variable that investors have to consider.

So don't worry, but be prepared.