How to Work the “Cycle” and Come Out Ahead

One of the very first lessons I learned in investing was about “cycles.”

Commodity cycles, to be precise.

This was all the way back in 2008. I was in my 20s and had just started writing financial newsletters when the economy started to collapse.

It was a scary time, but that also meant there were plenty of bargains to be had for shrewd investors. One was oil, which fell to $30 per barrel that December — just six months removed from hitting an all-time high of $145 in July.

I knew that was too low for such an important commodity, so I bought in.

Over the next few years, oil prices bounced back, climbing back over $100 per barrel in 2012.

So what did I do?

I sent out a letter to readers telling them to short it. Now, in fairness, I was a little early. This was 2012, and oil prices didn’t fall back down until 2014. But I never told anyone they’d make their gains overnight.

I was just playing the cycle.

By that time, I was working here at The Outsider Club. And as oil prices bottomed out in 2015, I wrote to subscribers of this very letter, telling them to buy back in.

Does this make me a genius market prognosticator?

Again, I was just playing the cycle.

Everyone says they want to do it, but then they go chasing after the trendy, overpriced, sensational play.

Well, if that’s the way you want to do it, fine.

But if you want to do things the right way, then here’s where you should be looking right now…

Like me, Outsider Club Founder and President Nick Hodge is a fan of cyclical investing. He knows what a major growth opportunity looks like, and he knows when to pull the ripcord and lock in gains.

He was one of the very first analysts to get ahead of the Bitcoin trend, recommending the cryptocurrency to readers back in December 2013.

Four years later, he recognized that it’d been over-hyped and overbought — a bubble if there ever was one. So he got readers out at the very top. 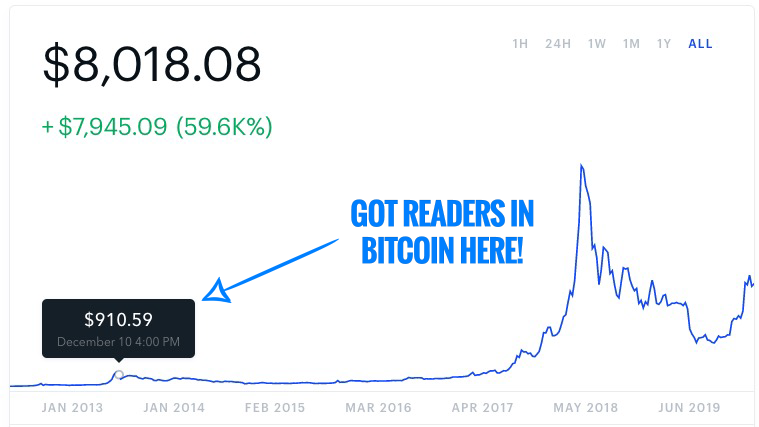 It was a heck of a ride. But Nick knew it’d come to an end.

But like oil, Bitcoin was destined to bounce back. And now, after falling out of favor in the mainstream, it’s time to buy in once again.

Of course, you’re not going to make very much money if you wait until it’s $8,000 again before you buy.

You have to do better than that.

And Nick can help you.

That’s because he’s found a way to buy Bitcoin and other cryptocurrencies at an unbelievable discount.

It’s an opportunity called “Crypto66,” and he’s out in Sweden taking a firsthand look right now.

When he gets back, he’ll release a full report on his findings to let you know how to cash in.

All you have to do to get updates, and the full report as soon as it’s available, is click here.

This is a cycle you don’t want to miss.

Why I'm Excited About Commodities Right Now
Commodities are crashing. Hard. They have been for about four years now. And I'm positively thrilled about it.
It's Time to Buy Bitcoin Again
Bitcoin is gearing up for another epic run and it's time to buy again. If you’ve been reading my work for any length of time, you know that’s a statement I don’t make lightly...
Get Into Gold Right Now
Let me be crystal clear, the time to add your favorite gold juniors is now. The bear market has done an excellent job of shining a spotlight on the better teams in the space. Here's what you're going to want to do...
Heal Your Ailing Portfolio Body