How to Build a Gold Portfolio

My friends are now asking me about gold stocks.

“I saw a video of you talking about Franco Nevada (NYSE: FNV) from February,” the text read this week. “Do you still feel that way?”

All Franco has done is double from its March lows. 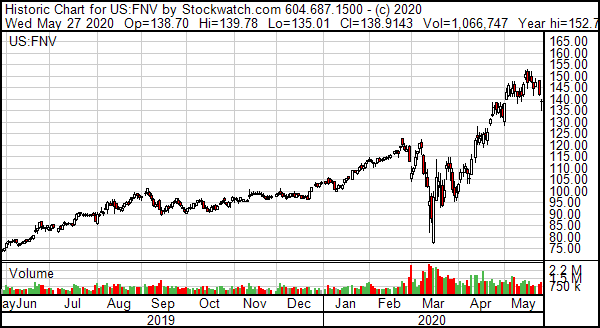 And I believe it — and gold prices — are going higher for many reasons that existed before the virus. Reasons that have now been both compounded and exacerbated.

I’ve already told you Bank of America is calling for $3,000 gold in the next 18 months.

The banks are now dropping like a Zoom call on slow internet. One by one they are becoming cheerleaders for Team Pet Rock.

This week it was the Canadian Imperial Bank of Commerce out with a note titled: Every Portfolio Should Have Some Bling, that noted:

With Central Bank printing presses running at full steam, we retain a positive outlook for gold prices over the next several years. As the sector has increased in importance, generalist investors will find it increasingly difficult to avoid owning gold equities without running the risk of material underperformance relative to benchmarks. As such, a key question is how to increase exposure.

And that’s exactly what I’ve been saying to paying clients for weeks now.

For the past 10 years, investors have had fear of missing out (FOMO) on stock market gains that translated to buying every dip. That dip-buying is now going to migrate over to gold stocks. (Robinhoodies are going to be the last to know because they are the dumbest investors, so when they start buying gold stocks you can sell them your cheap shares.)

But back to the point, and the reason I’m getting texts from friends about gold stocks: how to increase exposure.

If I were building a golden house my foundation would be poured with royalty companies: Franco Nevada, Wheaton, Royal Gold, and Sandstorm.

From there you go to the large, high-quality producers: Barrick Gold, Newmont Corp., Agnico Eagle, Kinross.

Those two sub-sectors will give most people all the exposure to gold they need.

If you’re really lazy and don’t mind fees you can buy an ETF. The Van Eck Gold Miners ETF (NYSE: GDX) has built its house as I’ve just described to you. You’ll be paying them 0.52% for doing that. Here are that fund's top holdings:

All houses need a solid foundation. What gets built on that is up to the individual.

Mid-tier producers, developers, explorers, prospect generators… they all have a place.

For my money, I’ve been loading up on developers with so-called “Tier 2” gold assets. These are companies that have proven gold in the ground that can now be re-priced higher because gold prices are moving up.

Some of these stocks are now beginning to move.

My gold house has long been built and I’m starting to reap significant rewards from it.

I guess that’s why I get texts asking which gold stocks I like.

Truth is, I’m not that hard of a book to read. I plainly say what I like and what I own.

I own all three of these gold stocks and think they’re going higher.