How Long Before We're Replaced by Robots?

It's true that many U.S. factory jobs were shipped overseas during the past quarter-century, but don't underestimate the impact of robotics.

Some 22 million manufacturing jobs were lost globally between 1995 and 2002, even as industrial output soared 30% due to technological advances.

You see, it's not just the United States. Manufacturing jobs in Japan and Germany have been dwindling since 1990. Even manufacturing in China has trended downward since 1996.

Foxconn, the notorious Chinese electronics manufacturer responsible for manufacturing your iPhone, announced last month that it'd automated away 60,000 jobs in just one of its factories.

One factory has "reduced employee strength from 110,000 to 50,000 thanks to the introduction of robots," a government official triumphantly told the South China Morning Post.

Meanwhile, back home, business titans are threatening to cut more jobs if they're forced to raise the minimum wage.

"It's cheaper to buy a $35,000 robotic arm than it is to hire an employee who is inefficient, making $15 an hour bagging French fries," Former McDonald's chief executive Ed Rensi recently told Fox Business.

That is, of course, somewhat disingenuous. Automation will occur regardless of whether or not the minimum wage goes up. It's already taking place.

The federal minimum wage, adjusted for inflation, is lower today than it was in 1950. That hasn't stopped Wendy's from automating anyway.

Dave Thomas's burger joint is replacing cashiers with touch-screen kiosks where patrons can order food and pay. One worker at a Chicago Wendy's said the move would eliminate five jobs from the location.

McDonald's has kicked off a machine-ordering pilot, as well. And White Castle has been testing order and check out kiosks for the last two years. 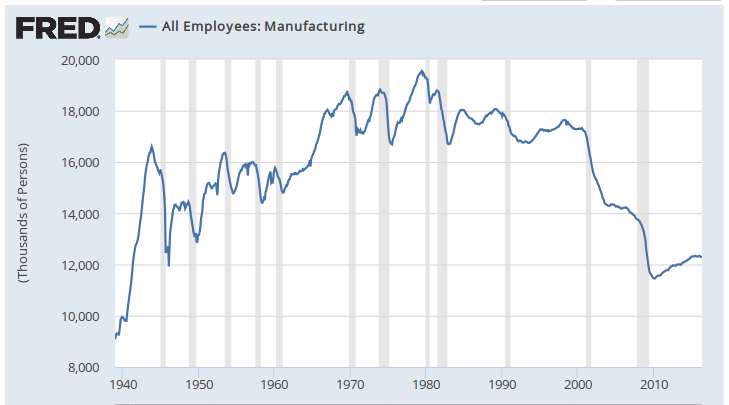 Automated customer service reps have been answering phones for years. Grocery stores have increased the number of self-checkout aisles. And toll booth operators are being replaced by EZ Pass.

Speaking of which, watch what happens to the trucking industry over the next decade.

There are currently 848,640 drivers employed in the trucking industry and that's with a labor shortage. Replacing them with automated vehicles would not only be cheaper, but safer too.

According to McKinsey & Co. switching to AVs would save $190 billion annually. Furthermore, multiple studies suggest it would reduce trucking accidents by 90%.

This is an evolution that's infiltrating more and more industries, as computers grow more sophisticated.

Two professors at Oxford University's Department of Engineering Science, Carl Benedikt Frey and Michael A. Osborne estimate that 47% of US jobs are at risk due to “computerization.”

Donald Trump and others are wrong. It's not Mexicans and immigrants that are taking our jobs; it's the robots.