Hot Trends Coming to a Stock Market Near You

China’s shadow bans are disrupting the world economy, but don't bet against the power of the retail investor.

Obedience is not enough. Unless he is suffering, how can you be sure he is obeying your will and not his own? Power is in inflicting pain and humiliation. Power is in tearing human minds to pieces and putting them together again in new shapes of your own choosing. — George Orwell, “1984”

I just got back from a closed-door investment conference at the Sagamore Pendry, Baltimore’s boutique Fell’s Point hotel backed by Under Armour founder Kevin Plank. With a view of the Inner Harbor, my team and I met with CEOs, top-level executives, journalists, and investment bankers from around the world. It was truly a one-of-a-kind experience... and it couldn’t have come at a better time.

We saw last week the impact of China’s policies on the markets, so it was good to get some insight from journalist Bob Guterma. As someone who lived there for 10 years, he layed out possible endgame scenarios to this Evergrande debt mess.

He likened investing in China to eating dinner on the Titanic after hitting an iceberg. Everyone knows where it’s headed...

He referred to the Chinese crackdown on tech companies as the “Red New Deal” because of its worldwide impact, and U.S. markets are still reeling. Most of us can’t fathom the Chinese government’s influence over its people and the world.

For example, this past June, Chinese citizens hosted Zoom (NASDAQ: ZM) meetings commemorating the 32nd anniversary of the Tiananmen Square protests. Keep in mind that Zoom is an American company and most of the meetings were hosted through Zoom’s servers in the U.S. through U.S.-based accounts. But the Chinese government had a line of communication to the company and was able to shut down the meetings because they displeased the communist party... a bit eerie, no?

In a reference to 1984, Kodak (NYSE: KODK) posted a picture of Xi Jinping on Instagram by photographer Patrick Wack with a caption calling China an “Orwellian dystopia.” Kodak, an American company, pulled the photo and issued a formal apology, saying it will “respect the Chinese government and Chinese laws.”

The government recently imposed a regulation to limit video game playing to three hours per week, from 8 p.m. to 9 p.m. Thursday, Friday, and Saturday. Such a small change had a massive ripple effect on video game company revenues around the world, including its very own Tencent (OTC: TCEHY).

And Chinese students overseas have been reprimanded by the government and even turned in by fellow classmates for going against the party.

But get this... China’s the largest trading partner to 120 countries, including the U.S., so it comes as no surprise that we’re appeasing the country. There’s a lot at stake...

However, to the country’s detriment, its stock markets are still below 2007 levels. The U.S. would look a lot different if our markets were stuck in 2007, so it’s no wonder that when wealth is created in China, it gets moved overseas.

The big takeaway is that China’s economy is not stable. The Evergrande mess impacted tens of millions of people. And as Xi Jinping may remain in power indefinitely since the presidential term limits were removed, we could see a power struggle in the near future.

Guterma also mentioned both Democrats and Republicans agree we need to have a tough stance against China, an idea we saw firsthand Friday as President Biden hosted the first Quadrilateral Security Dialogue (Quad) summit with Australia, Japan, and India. The Quad is expected to strengthen its resolve against the communist country.

China’s not the only economy in trouble. In the U.S., many of us simply can’t become the very best version of ourselves and be productive in the economy. This is something I’ve written about before. Sure, we can buy cheap Chinese goods on Amazon (NASDAQ: AMZN), which creates deflationary pressure. But everything important to living is more expensive, a sign of inflation. Check out this chart from Howmuch.net, a financial literacy website... And remember what’s true in developed countries is even more true in developing nations, especially in large cities. Stuff has gotten cheaper, but life has become more expensive. 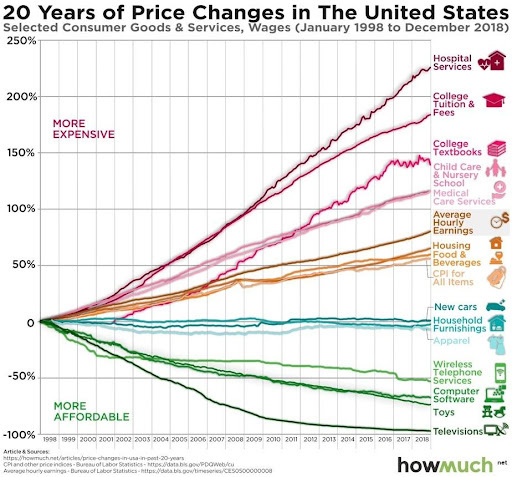 Who cares if you can buy a 20-pack of toilet paper at Costco (NASDAQ: COST)? The real drivers of the economy are so expensive that the costs are hurting families, housing, and even birth rates.

Our government needs to upgrade our human capital so that we are more competitive, have access to capital markets, and are in control of our finances. And if the musings from Congress of student loan forgiveness are true, it would be a boon to the economy unlike anything we’ve seen before, ringing in a new era of U.S. economic prosperity not unlike the Roaring ’20s.

One of the many perks of being in this business — and I absolutely love it — is getting to see new technologies and trends before they go mainstream.

And that spells good news for you, dear reader, because I can relay that information directly to your inbox.

We saw a live demo from a cybersecurity company that easily encrypts your personal files so hackers can’t access them even if they gain access to your computer. With all the cybersecurity threats these days, this company will become popular with businesses around the globe.

I was given a hand-rolled Bahamian cigar (don’t tell our keepers in Washington) from the founders of the first Caribbean stock exchange. They also created the first government-backed digital currency, which I’ve been saying for years is the future of crypto. Central governments won’t let crypto run amuck for much longer and will no doubt create their own digital currencies, thereby making all other cryptos obsolete. This idea has a far better outlook than pegging a currency to Bitcoin, as El Salvador did. With price swings as large as 30% in a single day, Bitcoin can destroy the wealth of anyone holding it. This is gonna be a big one...

We also had lunch with some oil tycoons who are disrupting the sector and making oil investments accessible to the retail investor. With this company, you’ll receive royalties and can even roll your 401(k) into the company’s fund.

Another theme at the conference was environmental, social, and corporate governance (ESG) investing, specifically that many companies are distancing themselves from tobacco. But I disagree here, as tobacco is one of the largest commodities in the U.S. Even if younger generations are shying away from cigarettes, tobacco companies are embedded in U.S. infrastructure and have the capital and resources to pivot as needed. I wouldn’t bet against them.

And liquid fuel isn’t going away anytime soon, as alternative energy requires broader system changes, and it remains to be seen whether this will happen in the near future. So look to cleaner sources of liquid energy like hydrogen and kerosine.

Once we sit down and go through the financials, I’ll feel comfortable giving you more information.

In the meantime, stick to your investing game plan and don’t be too worried about the markets, as there’s a lot to look forward to.