No one talks about nuclear or uranium anymore.

Investors have shunned it for going on nine years, during which the Global X Uranium ETF (NYSE: URA) has lost over 90% of its value. 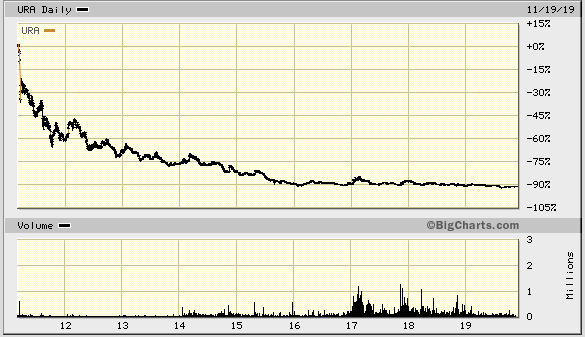 Similarly, uranium prices have been depressed, having hit a 12-year low below $18 per pound in 2016. They are currently stuck in the low $20s.

Given that uranium supplies clean baseload power for 15% of the world, the sector has never been in danger of going to zero. But it has bumped along just above zero for years now.

The current near-zero status of the nuclear and uranium industries must change if the world wants clean, stable electricity. The International Energy Agency is forecasting a rise in nuclear generation from 400 gigawatts today to 1,250 gigawatts by 2050.

Global nuclear energy generation has now recovered to pre-Fukushima levels. There are 447 reactors operating worldwide, 55 under construction, and 449 ordered/planned/proposed.

The U.S. remains the largest nuclear country in the world, getting 20% of its electricity from it via 97 operating reactors. (Yet it gets less than 2% of its uranium domestically. More on that in a minute.)

China has 47 working reactors, and is taking the lead on new reactors with 11 under construction and 213 in the works — aiming to triple its nuclear capacity by 2030 so its people can breathe. 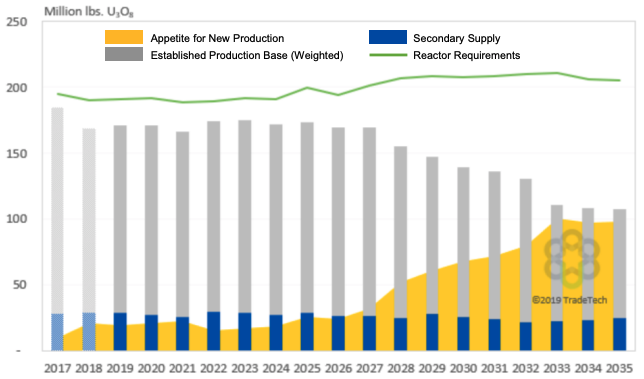 The current situation is unsustainable and will eventually lead to a uranium rally. Everyone has tried to figure out when. And it’s taken longer than most thought.

- Cameco (NYSE: CCJ), the world’s largest publicly traded primary uranium producer, has thrown in the towel on trying to produce since it can’t profit at current prices. It needs to deliver ~30 million pounds of uranium annually, and now only has one operating mine (Cigar Lake). If it can’t get that supply from the secondary market it will need to go into the spot market. This is something to watch, as having to buy that much uranium in the spot market would surely make prices tick up.

- A newish fund called Yellowcake is soaking up supply ahead of an anticipated bull market. It’s already purchased 8 million pounds from Kazatomprom, and has an option to buy $100 million per year of uranium for the next eight years.

- Demand from reactors that is not covered by contract will rise quickly in the coming years, with over 50% of current contracts expiring by 2025, meaning utilities must return to the market soon considering they need at least 18 months to turn the uranium into reactor fuel.

- Conversion and enrichment prices have been increasing as these sources have become critical for supply considering the mine supply shortfall.

- The nuclear world awaits recommendations from President Trump’s Nuclear Fuel Working Group, which is a result of the Section 232 petition filed with the Department of Commerce. Less than 2% of America’s uranium needs comes from America. Recommendations are long overdue, likely slowed down by impeachment proceedings. When they come, they are expected to be positive for the U.S. uranium producers, and will bring clarity to the market, which could spark the re-entry of utilities.

The very short version of all this is that no uranium mines are making money at the current uranium spot price of ~$25 per pound. The price needs to double to incentivize new mines to come online.

New uranium mines must come online if the world wants to breathe. Going to zero is not an option.

And since the entire sector is down more than 90%, the upside is substantial.

I have been accumulating shares and warrants in quality uranium companies. There are only a handful of them globally.

Yesterday, I sent a note to my high-net-worth clients inviting them to participate in a private placement in one of my favorite junior uranium companies. The deal is closing soon, but if you act today there is still room for you.

Details here on how private placements work so you can get involved.

The Bulls Will Have the Last Laugh
The last several years have been rough, but new data shows that uranium bulls will be validated in the end. Outsider Club editor Gerardo Del Real discusses the future of the uranium market...
We're Losing The Resource War
While the world waits to see if a deal can be reached between China and the U.S., there is another war that has a clear winner… the war for the next generation of resources.
Heal Your Ailing Portfolio Body