Here’s How We Stop the Shootings

I hate to sound jaded, but living in Baltimore, I hear about a lot of shootings.

And it kind of just becomes noise after a while.

At least until it happens at a school.

Unfortunately, school shootings have become devastatingly routine on a national level. Yet they never cease to disgust.

That was the case for me last week when a double shooting sent a Baltimore high school into lockdown.

In that instance, both a 15-year-old girl and a 16-year-old boy were shot behind a local high school.

But disturbingly, they were also just two of seven teenagers shot within the span of a week.

This is frustrating. It’s a demoralizing problem to have — both locally and nationally.

That’s why I continue to hold out hope for solutions.

And mercifully, one may be around the corner.

You see, for the past five years I’ve been researching technologies that could help solve this problem.

One such solution includes camera technology that’s capable of scanning people for weapons, as well as AI-based facial recognition.

It has 500 types of weapons in its database. It can tell if you’re carrying a gun, knife, or even a bomb. And it can compare a person’s face with a database of known terrorists or criminals.

As such, it can thwart a terrorist attack before it even begins.

The technology has already been tapped to provide security solutions at high-profile events like the Super Bowl, the Rose Bowl, concerts, billion-dollar boat shows, and Silicon Valley technology conferences.

And no one even knew it.

However, not everyone is comfortable with facial recognition technology — especially when it comes to children and schools.

And if that’s the case, that’s fine, because another technology I’ve looked into uses a different type of body-scanning technology that is more akin to airport body scanners.

In fact, the guys who invented those spinning cylinders many of us pass through on our way to catch a flight have invented a new, more advanced, more efficient body scanner.

It also uses AI and machine learning to detect things like 3D-printed guns, plastic explosives, and ceramic knives — all things that would evade your run-of-the-mill metal detector.

Better still, if there’s any kind of contraband that authorities are on the lookout for, this technology can be programmed to find it.

Road flares, for example, which are now being used to disrupt sporting matches. Or bottles of alcohol being smuggled into a stadium or onto a cruise ship.

I even flew out to the company’s headquarters near Boston to see it firsthand. 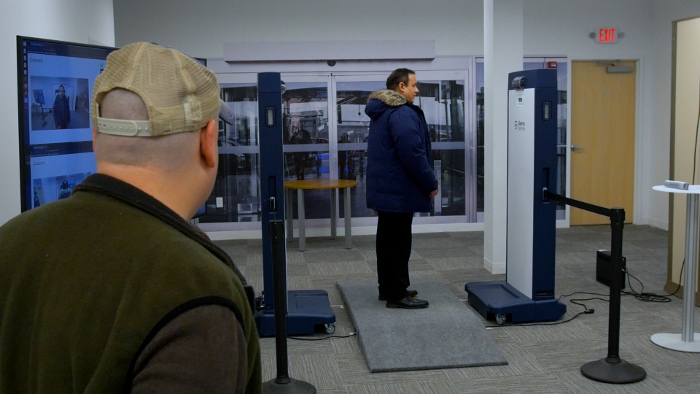 So I can tell you it’s extremely efficient. You don’t have to take your jacket off or put your purse down. All it takes is a momentary pause as you pass through.

That may seem somewhat trivial, but when hundreds of students, or tens of thousands of people, are attempting to pass through a security checkpoint, the 30–60 seconds that get saved add up to hours of reduced wait time.

These are the kinds of solutions that I think will end up being deployed.

They’re practical and implementable in a way other solutions (like arming teachers and having one door) are not. They also skirt neatly around the Second Amendment debate, which is an absolute quagmire.

Perhaps that’s why technology like this is already being deployed in schools.

Indeed, Atlanta Public Schools spent $2.6 million on the technology last year. And if you ask officials, it’s been well worth the money.

Teachers and administrators no longer have to check every bag, and students don’t have to queue up in long lines to be intrusively searched.

I also know this is gaining traction because I passed through similar scanners on my way to a Sunday night football game last September.

So there’s a real opportunity here — not just to make money but to end one of our most horrifying national nightmares.

That’s why I’m proud to cover technologies like these in my Secret Stock Files investment service, where I investigate all manners of defense and security tech.

You can find out more about that here, if you’re interested.