Hedge Funds Can't Predict Anything... Except for Money Showers

Have you ever wondered how your local weatherman still has a job?

Have their fancy forecast models ever missed so routinely you thought you could do a better job just by guessing?

That's how I feel about hedge funds.

It's something we've talked about before. (Many times before, actually.)

Most recently, I wrote about hedge funds as a retirement scam.

Here's just one of the many data points discussed...

Simply put, investors have more to gain from a S&P 500 index fund than they do a costly and complicated managed fund. 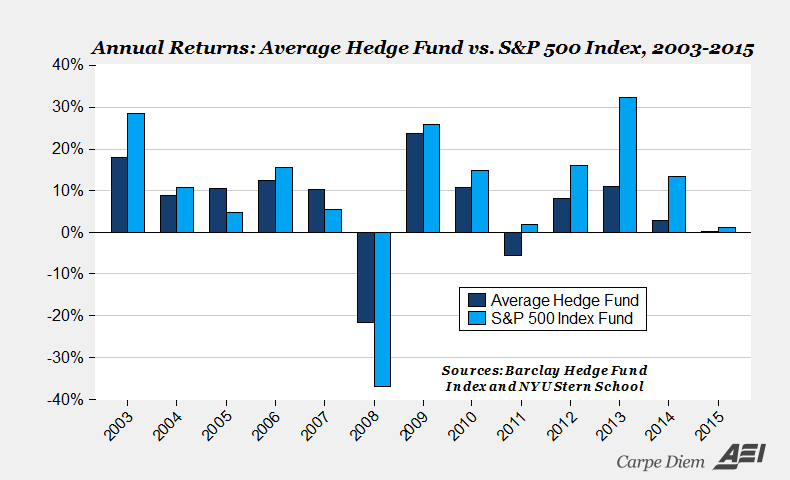 Furthermore, not only do these funds fail to beat the market, they charge exorbitant fees.

Asset Management Fees: Money that goes to the portfolio managers and investment researchers who act as the architects of your retirement plan.

Marketing Fees: Money used to advertise your product to other people. (That's like a fee on your monthly car payment to buy ad space for the next year's model of the car you bought.)

Investment banks make huge amounts of money with these kinds of carnival games and gimmicks.

And that's how we get reports like today's from Institutional Investor Alpha, which said the 25 highest-earning hedge fund managers in America brought home a collective $12.94 billion in 2015.

That's mind-boggling to me.

Five of the 25 people on the list – all of which earned more than $135-million – got there even though their funds lost money.

They're not paying their full share of taxes on it, either. That's because the “carried interest” loophole lets them pay the capital gains tax rate of 20%, as opposed to the top income tax rate of 39.6%.

If there's a silver lining here, it's that people are starting to come around to this giant scam.

Worldwide, investors asked for more money back from hedge funds than they contributed in the fourth quarter of 2015 — the first net quarterly withdrawal in four years.

That trend has continued in 2016, as big investors pulled an additional $19.75 billion out of hedge funds in January, the most since 2009.

So the exodus is building... just not quickly enough.