The Real Root of the Debt Crisis

Written by Brittany Stepniak
Posted May 2, 2013

“Money is to my social existence what health is to my body." — Mason Cooley

Today's turbulent financial times are likely to leave you in a world of panic if you have neither money nor health.

And it's hard to get by with just one and not the other.

Though I have been blessed with good health and still have youth on my side, I know it may not always be this way.

I know how quickly the world can remit an unexpected and expensive twist of fate...

"Millions of American Families are One Medical Emergency Away from Bankruptcy"

Even before the 2008 economic fallout, an American family filed for bankruptcy due to health-related debt every 90 seconds.

I come from one of these families.

When I was 13 years old my mother filed for bankruptcy. My parents had divorced a few years earlier, and we moved from a single-family home in Upstate New York into a three-bedroom apartment in a charming town in southwestern Virginia, where my siblings and I were able to attend one of the nation's top public secondary schools and still cut our overall cost of living.

My mother was working for the Department of Social Services and raising three kids. She took on an extra job on the weeknights — and even attempted a third one on weekends at one point.

We weren't completely struggling to make ends meet. After all, we were exceptionally frugal, living without cable and Internet services until the Web became a neccessity for school projects... We would watch the news on an old TV set and plug in the VCR for family movie nights.

Plus, my father was still very present in our lives and paying child support.

We weren't wealthy by any stretch of the imagination, but had what we needed and my mother would have been able to start setting a little aside for college.

But the aforementioned unexpected twists of fate showed up.

My younger sister was diagnosed with junior myoclonic epilepsy (JME) about a year before my mother was diagnosed with ovarian cancer and suffered a severe staph infection after surgery. She remained in the hospital for the better part of a month, and was back a few months later with new complications.

Hospital bills piled up and my sister required numerous specialists and incredibly expensive medication. Many specialists were at hospitals hours away from us, adding travel and lodging costs to the pile of medical bills. My parents' work schedules were greatly disrupted, further contributing to their financial woes.

My mom's family insurance plan was sufficient in keeping the cost of many of my sister's prescriptions down to the bare minimum, but it just wasn't enough. At one point, my sister was on 15 different pharmaceutical drugs, including several experimental drugs with bad side effects requiring additional medication to counter the negative effects of the primary drugs.

Paying medical bills was complicated as well. Even when a specific hospital was in our network, some of the doctors or phlebotomy-labs that played a role in the process weren't.

Whenever my mother would pay off one bill, another would inevitably arise.

Doctors decided my sister's epilepsy might be something other than a traditional case of JME after she responded poorly to traditional treatment. Her seizures were difficult to manage, so the experiments continued. She was in and out of research facilities, neuroscience offices, and hospitals instead of in school most of the time...

At the height of our family's crisis, my mother felt there was only one option left: bankruptcy.

As ashamed as she was, she felt trapped and without an alternative. And her situation is not unique...

For the 92% of the medically bankrupt, high medical bills directly contributed to the motion to file for bankruptcy. Since 2001 the proportion of all bankruptcies attributable to medical problems has increased by 50%. Nearly two-thirds of all bankruptcies are now linked to illness.

And as idealistic as the president's speech-writers make ObamaCare sound, this program is only adding insult to injury.

While Obama promised to lower premiums by $2,500 per family per year, national health expenditure projections from the CMMS estimate the premiums increased by 8% in 2012, and many companies are now dropping employees' spouses and family members from their policies.

Similarly, businesses are incentivized to hire fewer full-time workers and more part-timers to avoid the mandated "affordable health coverages" — or face a $2,000 employer penalty for each uninsured employee.

We are a nation of nearly 50 million uninsured citizens.

The United States spends $300 billion on pharmaceuticals each year and $2.7 trillion on health care. Forgive me for stating the obvious, but that's hugely problematic... Soon, individuals won't be the only ones going bankrupt. Our government could be next.

Astronomical medical costs are met with major shortfalls in care. It is rare to get the quality of care you pay for nowadays, despite the fact that the U.S. outspends all other OECD nations on health care both per capita and as a portion of GDP: 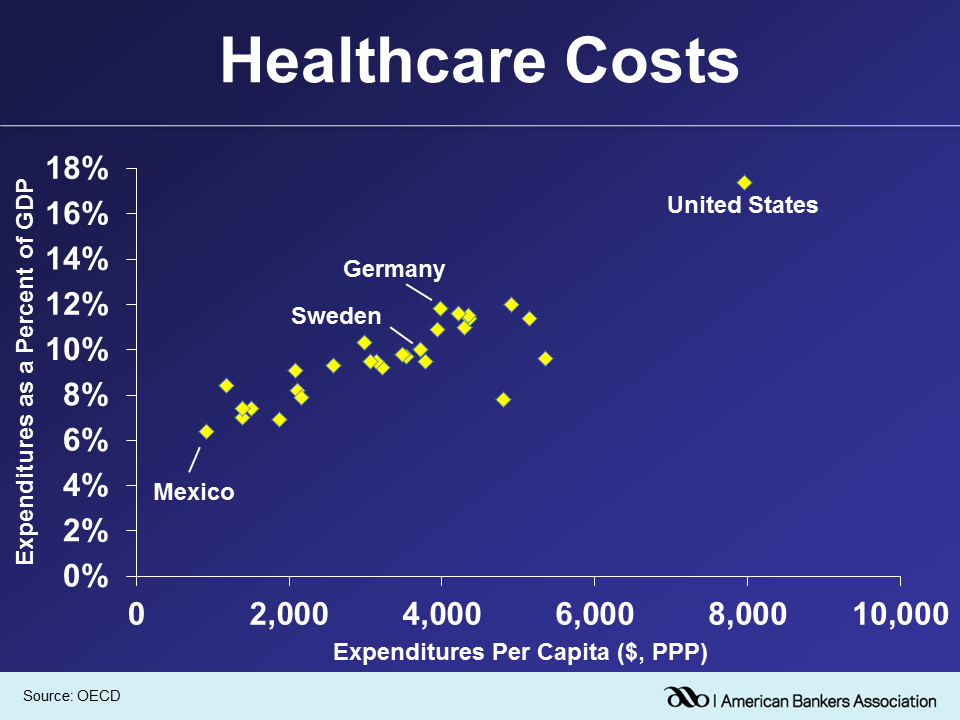 We need to revamp the entire system.

Doctors should be rewarded for quality of service, not volume of service.

Big Pharma is a huge hindrance. Physicians and specialists are less inclined to spend time interacting with patients to understand what's really wrong, and are instead rewarded for selling brand-name drugs to as many patients as possible.

People don't always need drugs: they need to improve their health. And that starts with quality primary and preventative care.

Compared to Australia, Canada, Germany, the Netherlands, New Zealand, and the United Kingdom, the United States comes in dead last in five areas of health system performance: quality, efficiency, access to care, equity, and the ability to lead long, healthy productive lives, according to the Commonwealth Fund.

It is shameful that costs are rising while care is declining.

If health care costs were under control and growing no more quickly than the economy, we'd stand a chance at getting a handle on our national debt. Unfortunately, health care spending is currently growing at about 1.5x the rate of the GDP — and is already close to 20% of the entire economy.

Forbes reports: "Health care spending will eat up the federal government’s budget even sooner, and that is the root cause of the U.S. sovereign debt problem."

At this rate, how can we expect to find the funding and the manpower for other social programs, i.e. Social Security, defense, or any other federal government roles?

Congressional leaders, the health care industry, and Big Pharma need a new concrete strategy — before this looming health care/bankruptcy crisis snowballs to a national debt crisis we'll never get out from under.