Publisher's Note: I was interviewed by Kitco News this past weekend while attending and speaking at the Silver & Gold Summit in San Francisco. It gives a good overview of where we're currently at in the gold bull market, as well as what's needed to take it to the next level. Please find the transcript below.

Nick Hodge: Neils, pleasure to be with you.

Neils Christensen: So you were actually in a panel discussion at the Vancouver Resource Investment Conference at the start of the year, saying that sentiment was not great, improving but not great, having trouble punching through $1,300 gold. What is it now? I mean, how's sentiment? We're now staring down the barrel of $1,500 gold prices, the gold metal is up 16% on the year. What's your outlook now?

Nick Hodge: I think the sentiment depends on what flavor gold lollipop you like, right? If you're one of those guys who's been invested in the large-cap producers and the mid-tier producers, those guys have had great performance over the past 12 months as gold has made it to 1,500. They make a widget for X dollars and their selling price has been going up. And so if you look at the charts of, I mean, you name them, Barrick and Newmont and Kirkland Lake and Sibanye, they're up 100%-150% over the past year. Some of the mid-tiers have started to go with them.

If you dabble more in the junior space, as I tend to do, you don't feel so good right now. I'll give you an example. I was making a chart for the presentation I'm giving at this conference and I just looked at the first four sponsors on the list of sponsors for this conference, and I put the chart in... They're all down 40%-60% in the last 12 months.

Neils Christensen: And they're still going to let you speak?

Nick Hodge: I hope so. I hope they don't kick me off the stage. But that's sort of where we are, right? The producers have gone but the junior miners haven't yet, and I'm sure we'll talk about why.

Neils Christensen: That leads me to why. I mean, if a 16% rally in gold price can't get excitement in juniors... Everybody was saying, "Oh, we just need a higher gold price. We just need a higher gold price and juniors are going to take off." They haven't. And in fact, now during this consolidation, we've now seen them fall off. Is it just a matter of people don't believe this rally or... What's holding back the junior sector? 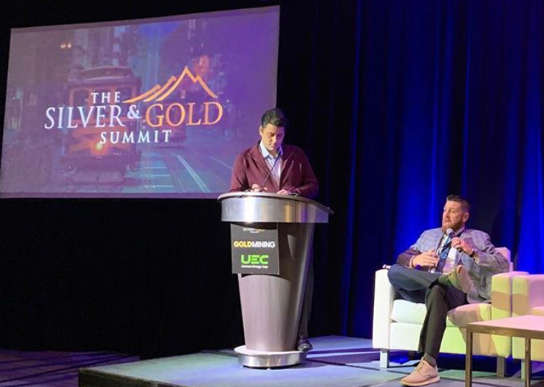 Nick Hodge: There's a couple of things. One, they don't believe the rally. I equate junior investors to beaten dogs, right? They saw the first ascent in 2016 and that immediately got taken away from them. They've seen their share prices decline. Look, if you put a chart up last year of three- or five-year gold stock performance against uranium, gold stocks were down even further than uranium, and we know how far down uranium stocks are. Another thing is I think it's tough to attract capital to the junior space, like retail and outside capital, when the mid-tiers and large-caps had been doing so good. And then you have this stigma with the juniors that they're so risky or they do some nefarious things in the way they finance themselves or put themselves together or the way they compensate their executives, et cetera. And so investors are wary of it.

I think you need outside blood like guys like me and investors who are at this conference that I see year after year. I mean, there's not limitless capital for these individuals, right? Some of them are tapped out. I've talked to people that have been in this space for years that say, "I can't write another check." And now is the time to be writing checks. So a couple of things could help. One is continued M & A, continued consolidation like we've been seeing.

Neils Christensen: Well, do we need to see juniors taken out? Because I mean all the consolidation has been in the upper tiers, like Barrick-Randgold, Newmont, and Goldcorp, everybody knows those. Even the mid-tiers, there's been some activity there, but not a lot of buying of junior companies. So do we need to see that?

Nick Hodge: There was a company named Northern Empire that was taken out in Nevada last year. But you're right, not a lot of small companies taken out and I think that's what's going to change next. I mean, if you think about it, the gold space has a cascade effect when you typically see what we're seeing, right? The large-caps move first and then the mid-caps and then the juniors. Some of these juniors are really quality ones, right? Ones that have made discoveries five years ago and have been plugging away. Infill drilling, converting their resources from inferred to measured and indicated to proven and probable, checking off all the boxes and doing the right things. And now their projects that their stocks ascended on — went up so fast on — five years ago are being valued less than they were when they originally discovered despite being significantly more de-risked. And so you'll see these assets, quality ones, two-, three-, four-, five-million-ounce-plus that are in good resource categories and jurisdictions, you will see them start to be taken out.

Nick Hodge: I keep the faith by looking at the numbers, right? And you can only stay solvent for so long as this market remains irrational. But if you look at some of the net present values, for example, I won't name companies, but I can look at an after-tax NPV of a company that's call it $300 million, but the stock is trading at $75 million. And so you look at this disparity and you look at... and that's $1,250 gold, right? And so here we are at $1,500 gold. We know the sensitivity is higher. That's probably worth a couple million more dollars than the NPV said. And that's how I keep the faith because the numbers show me what has to happen.

Neils Christensen: How long can the market be irrational and you remain solvent?

Nick Hodge: That's the big question, right? We were talking offline about what makes that happen, another Great Bear discovery or a rip-your-face-off gold bull market, right? We see gold go to $1,600, some of these generalists and institutions are going to say, "Hey, I've got to get in." And then there's only so many names that meet the criteria I just mentioned.

Neils Christensen: Yeah. So along with the price you think maybe a major discovery gets new blood into the market?

Nick Hodge: Absolutely. I mean, gone are the days of massive discoveries. 10-, 15-million-ounce guys. I mean, it's just been an absolute dearth of new ounce discoveries despite exploration budgets starting to creep back up. And so yeah, something that gets gold stocks back on Bloomberg headlines and in the Wall Street Journal again, right? That's what brings new blood in because the blood here that's been investing for the past, call it five years, is jaded and close to tapped out from the talks I have with people.

Neils Christensen: That's perfect. Nick, thank you very much for joining us today. Those were fantastic comments.

Nick Hodge: Neils, thanks for having me.

Click here for in-depth gold and gold stock coverage from yours truly.

Bond Market Cracks, Gold Soars
The two main factors driving gold right now are the safe-haven status that the yellow metal provides and realization that we are entering a game of bond market/currency musical chairs which can only end one way because of math.
All-Time Record-High Gold Prices Are Here
All-time record-high gold prices are here, are you taking advantage? If not, don't worry. Outsider Club founder Nick Hodge has some good news for investors...
James Dines on Gold: The Truth Isn't The Same Everywhere
Downtrends are actually apparent for every paper currency in the world relative to gold. Today we turn to Mr. James Dines for his latest take on the gold market, which has found a lot of resistance around $1,500 per ounce. However, if you look outside of the U.S.A., the price of gold is on a whole different trajectory.
The Final Gold Bull Market
Not only is gold climbing at a time of unprecedented global financial uncertainty, but demand for gold is rising. Outsider Club founder Nick Hodge clues investors in on how to take advantage...
Investing in Marijuana Without Getting Burned
The marijuana industry has rewarded scores of investors with life-changing gains.