After rocketing to a new record high above $2,000 per ounce, gold has taken a bit of a breather.

No stock or commodity shoots straight up. 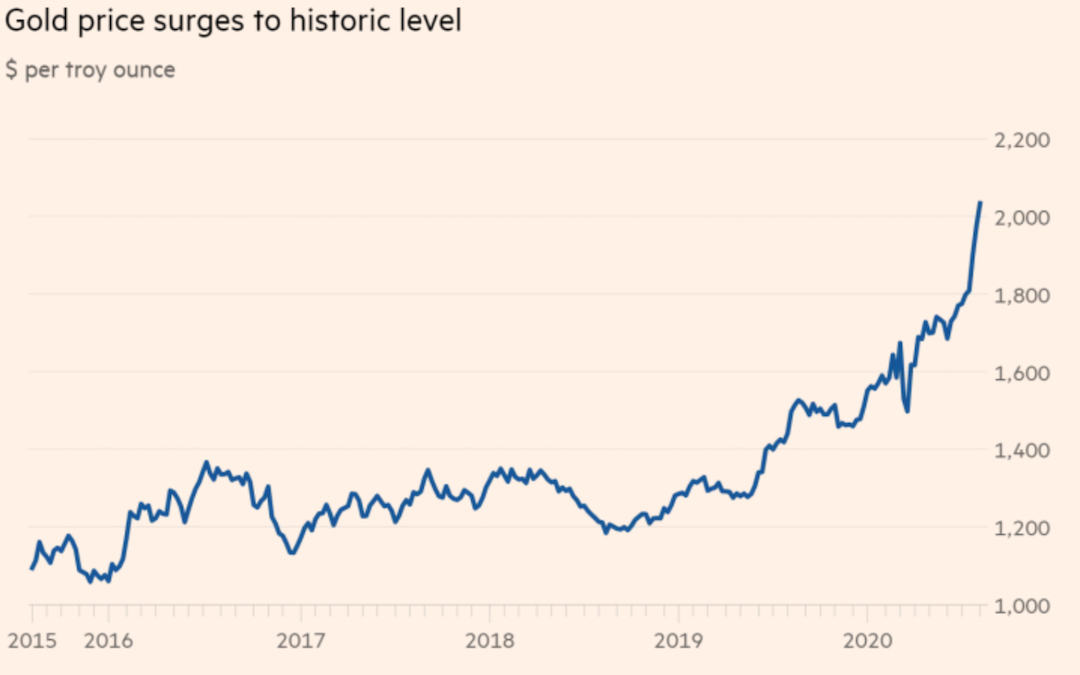 ...You know things are going to turn south at some point.

Nevertheless, all indications are that this is, in fact, a mild and temporary correction.

As we've discussed, U.S. monetary policy is such that inflation WILL be manifest.

And truly, inflation already is quite prevalent; it's just being ignored because it doesn't fit into the cozy confines of the Federal Reserve's archaic metrics.

Furthermore, as the Fed pursues more robust inflation, it does so at the expense of yield — keeping its rates at near-subterranean levels and thus suppressing payouts on Treasuries, bonds, and savings accounts.

Personally, I just received another email — the fifth since the pandemic began — from my bank informing me my interest rate would once again be reduced.

It now stands at 0.8%, down from 1.83% at the start of the year and 1.98% when I first opened the account in August 2018. At the time it was considered a "high-yield" savings account, and to a certain extent it still is, when you consider the average bank savings rate right now is 0.1%.

What's even the point of that?

And, speaking of bubbles, that's exactly why the stock market, and to a lesser extent the housing market, have decoupled from the economic reality and surged higher themselves.

Those surges, like gold's own meteoric rise, are not sustainable.

Hence my confidence that gold will undoubtedly rebound.

The reality is that the pandemic, and the economic turmoil it's wrought, aren't going anywhere.

To the contrary, it's getting worse.

Our government's initial effort to contain the devastation —  a "stimulus" package that funneled taxpayer money to politicians and their donors while delivering a pittance to the average American — was weak, ineffective, and plagued by corruption.

And now that the country's political apparatus has paid off the few people it thinks truly matter, there is no appetite to extend benefits or pass a new bill to further reinvigorate the economy.

To be clear, the president and Congress have utterly failed in their duty to save lives and the economy amidst the greatest challenge our country has experienced since 9/11.

It is shameful, but that's the reality.

And as a result, things will only get worse as we head into the fall.

America is about to be inundated with a wave of evictions, foreclosures, bankruptcies, and job losses.

When that happens the market will crash once more and gold will shoot higher, prompting the Fed to print more money in a desperate bid to fill the void left by our incompetent government.

This, in turn, will further accelerate the cycle we're already seeing, where asset prices blast higher but growth stagnates or contracts.

The only question, then, is: How high will gold prices go?

It's uncertain. But one analyst, Paul Tudor Jones of Tudor Investment Corp, believes we're headed to $2,400 as a floor and potentially as high as $6,700 if inflation really takes root.

Tudor didn't just make those numbers up, either. He calculated them based on a ratio that tracks the value of gold above the ground to global money supply. And if demand becomes as extreme as it did during the inflation spike of the 1980s, gold prices would reach $6,700.

That would obviously be a worst-case scenario (or best-case, depending on your holdings) but even if we only retrace a fraction of that path, gold prices of $4,000 or $5,000 an ounce are hardly out of the question.

And that's why I'd encourage you not just to invest in gold, but to check out Nick Hodge's latest report.

Nick has joined billionaire investing legend John Paulson in isolating what's poised to become the world's biggest gold mine. And with the recent correction, it's trading for just pennies on the dollar.

It may never be this cheap again. Not with gold prices set to shoot to the moon in the months ahead.