If a senior technical strategist at Citigroup is to be believed, gold prices will soon be testing $2,000 per ounce.

Shyam Devani, the analyst in question, says that the ratio between gold and the S&P 500 is testing a critical pivot point and a break higher could trigger a rally that pushes gold prices 25% higher.

“Equity markets continue to look vulnerable, especially given the deeper inversion of the U.S. yield curve,” Devani says. “Sometimes the ratio between asset classes is too hot. Sometimes too cold. But sometimes the chart signals ‘Just right’.”

On Wednesday, the 10-year bond yield fell even further below the interest rates on two-year bonds. At the same time, interest on 30-year bonds fell below 2%. This inversion of the yield curve has been a consistent predictor ahead of every major recession.

Gold is up nearly 19% year-to-date while silver has soared 7%.

And the month of August was especially hot, as gold jumped $112 per ounce, beating June for the best gains since 2016. Meanwhile, the S&P 500 has tumbled more than 3% this month. 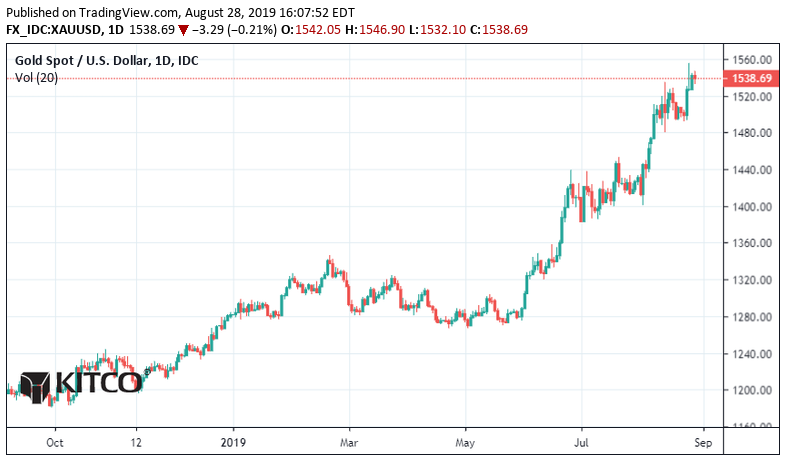 This is 100% in line with what we’ve been predicting for years.

Now, our case is stronger than ever.

We are clearly heading into a sluggish, if not recessionary, environment. The market has been faltering, and we’re long overdue for a bear market.

Similarly, as the global and U.S. economies have begun to falter, we’ve re-entered a period of loose monetary policy. Rate increases at the Federal Reserve slowed and then reversed course, culminating in July’s 25 basis point cut.

The FOMC will meet again September 17-18. It’s widely expected that the Fed will issue another rate cut at that meeting. Of course, there’s no guarantee that the Fed will cut again, but given certain economic indicators, it’s likely.

President Trump has been harassing Chairman Jerome Powell for months now, demanding rate cuts to weaken the dollar and mitigate the damage of his trade war with China. He’s even tried to appoint unqualified lackeys to the Fed’s board to do his bidding.

Trump continued his broadsides in August, calling the Fed Chairman he himself appointed an enemy of the state on par with Chinese President Xi Jinping… 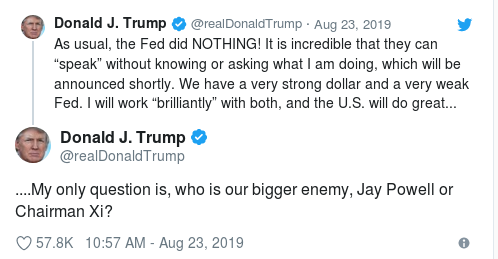 The central bank is supposed to be independent. It’s mandated by Congress to moderate prices and promote employment.

It is not the job of the Fed to compensate for poor economic policy, to throw the dollar under the bus any time we face the prospect of a recession, or to prop up the stock market with cheap money.

Nevertheless, it’s clear why the President would want to avoid such a collapse heading into the 2020 election.

What remains to be seen, though, is how susceptible the Fed will be to Trump’s harassment.

Will it cave to political interests or stay true to its mandate?

We don’t yet know.

But if the Fed does cave it will have set an entirely new precedent that future politicians will continue to exploit.

Going forward, every politician in Congress will scapegoat the central bank to save their own skin, and the Fed will lose all independence, neutering itself and effectively becoming a political tool.

That would be terrible for the dollar. And such a scenario, alone, makes gold an attractive investment.

Nevertheless, the reality is that the Fed doesn’t have many tools left. Rates are already low, with little room to limbo any lower.

Unless, of course, the Fed follows Europe’s lead and takes rates negative. In that case, people would have to pay a fee just for the privilege of lending money to the very banks they bailed out 10 years ago.

If that happens, I think Shyam Devani is drastically underestimating the dramatic surge we’ll see in gold prices.

And if you want to know the best way to profit, you should check out our latest gold report here.

Your Last Opportunity Ever to Invest Before the Final Gold Bull Market Begins
Discover five catalysts to launch gold stocks 371%, 322%, even 489% in just a few months
What’s Next For Gold Prices?
By this point, you probably know gold is making a major breakout, having surged to a six-year high. Outsider Club editor Jason Simpkins discusses why it's happening and how investors can take advantage...
All-Time Lows All Around Us
We are going through a global version of 'keep the zombies alive' with the sustenance being cheap money and a shell game of "we print money to buy our own bonds and stocks." Outsider Club editor Gerardo Del Real explains why you should expect volatility...
Investing in Marijuana Without Getting Burned
The marijuana industry has rewarded scores of investors with life-changing gains.