Investors should not follow breadcrumbs dropped by eccentric billionaires.

I don't care if it's Elon Musk or Warren Buffett.

You've got to get out ahead of the market.

And that's what we've been doing with gold.

For months now, I've been harping on inflation and preaching gold as a profitable hedge.

In all that time, the yellow metal labored as other commodities took off.

We watched prices for things like lumber, copper, and oil surge.

We watched the herd stampede into fly-by-night cryptocurrencies.

And all the while we watched gold languish.

First, it fell from its August peak above $2,000 per ounce. And then it slid further through the winter.

But now what's this? 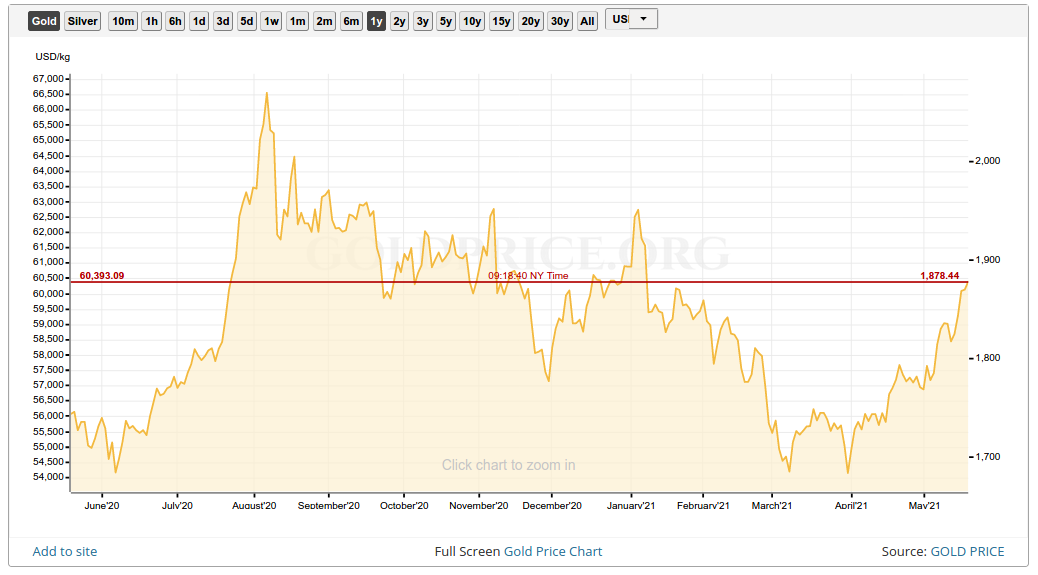 It looks as though a rebound is well underway.

Today, gold is at its highest level since January.

Indeed, it's not just me anymore.

It's Forbes, Barron's, Bloomberg, MarketWatch, and investors all across the spectrum just now snapping out of their post-COVID euphoria.

They've all finally come to realize what I've been saying all along — just now coming to reckon with the obvious.

Commodities are on fire. The housing market is overheating. The dollar is diving and bond yields are rising.

The Fed has miscalculated.

Jerome Powell and Co. thought they could stomach these higher prices while they patiently waited for employment to return to its pre-COVID levels.

But it's not working out that way.

The unemployment rate unexpectedly rose to 6.1% in April, which is roughly twice the pre-crisis level. Employers added just 266,000 new jobs, sharply missing Wall Street's expectations, which had expected to see a million or more created.

Meanwhile, the Consumer Price Index (CPI) jumped 4.2%, marking its fastest pace since 2008. A Dow Jones survey had expected just a 3.6% increase. And the month-to-month gain was 0.8%, topping the expected 0.2% in April.

All of this points to something I predicted back in March, which is that the race to inflation would beat the race to full employment.

The Fed, of course, anticipated that might be a problem, which is why it pre-loaded excuses...

It continues to say it's "transitory." And now, it's going to over-emphasize the year-over-year baseline.

It'll say this as if it's all just some magical illusion and in complete contradiction of a reality in which the prices for many things actually rose during the pandemic.

It's a fantasy that's also belied by the monthly inflation increases listed above.

The difference between March and May, though, is that investors now are starting to catch on. That's why we've seen so much market turbulence these past few weeks.

It's not just the crypto-crash undermining faith in the market (as many publications assert). It's institutional investors adjusting their positions to accommodate the likelihood that the Fed will have to act faster than anticipated.

Models that originally penciled in the first rate hike for 2023 are now being updated to reflect a potential rate increase in 2022. Analysts and investors who initially thought the Fed would keep rates locked down low until the second half of 2022 are now moving their forecasts up to the first half of 2022.

There's also a growing expectation that the Fed will have to act more quickly to curtail its bond purchases — especially in the mortgage market, where an obvious bubble has formed.

That's why the market plunged, and it's why gold is suddenly back in vogue.

Inflation, a wobbly market, and the startling realization that maybe cryptocurrency isn't the best dollar alternative available have all created a perfect storm for gold.

And that momentum will likely carry prices much, much higher.