Here are some key points from the piece.

Mr. Dalio explained — as I’ve said for years — that central banks have been lowering interest rates and doing quantitative easing (i.e., printing money and buying financial assets) in ways that are unsustainable.

He goes on to explain that central banks doing more of this printing and buying of assets will produce more negative real and nominal returns that will lead investors to increasingly prefer alternative forms of money (e.g. gold) or other storeholds of wealth.

I look for trends. I usually get ahead of them early. Early usually means I end up adding to positions — many times at lower prices — until the thesis plays out. If I’m right, I make money. If I’m wrong, I move on.

Look at the charts below showing the interest rates and the monetary base in the dollar, the euro, and the yen. 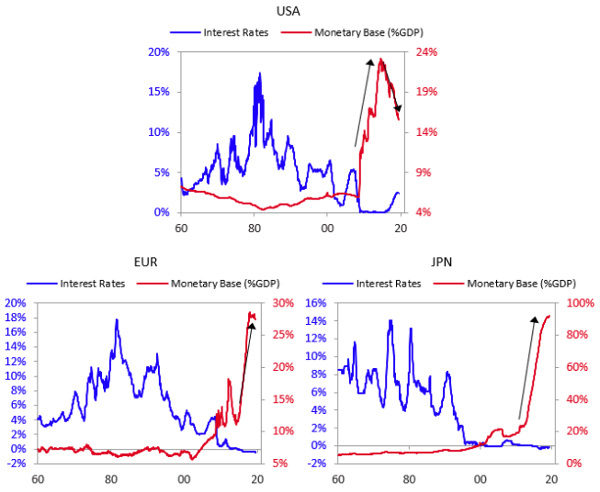 Dalio goes on to explain that he suspects that the new paradigm will be characterized by large debt monetizations that will be most similar to those that occurred in the 1940s war years.

The piece is brilliant because of its simplicity.

He goes on to say:

“It is also a good time to ask what will be the next-best currency or storehold of wealth to have when most reserve currency central bankers want to devalue their currencies in a fiat currency system.”

He ends by saying:

“Most investors are underweighted in such assets, meaning that if they just wanted to have a better balanced portfolio to reduce risk, they would have more of this sort of asset. For this reason, I believe that it would be both risk-reducing and return- enhancing to consider adding gold to one’s portfolio.”

Bottom line is this.

Central banks around the world are back to a coordinated reflation that will force capital to seek refuge somewhere other than in negative-yielding assets.

I’ve written at length about European, Japanese, and U.S. debt, so I won’t rehash those points here. Just understand this: Rates are headed down because governments need rates to go down in order to service the debt.

Negative rates are going to get lower and the 10-year here in the U.S. is headed to 0% and likely negative before the whole thing implodes.

Gold and Bitcoin are on the verge of historic runs for the same reasons. They each provide an alternative, a safe haven against the outright theft of capital by central bankers and governments that are out of control.

Simply put, people are losing faith in their governments.

The run higher won’t happen in a straight line.

We need to see a monthly closing above $1,443 to continue this push higher or we’re likely to see a pullback in the short term.

Silver, which I’ve been skeptical of, just touched a new 52-week high and appears ready to join gold in the new bull market. The next month will be important, technically, for silver.

For now, I’m content with exposure through some core positions and some quick-moving trades that rapidly profit from price swings.

Historically, silver is gold’s more volatile cousin, overshooting to the upside in bull markets and to the downside in bear markets.

It will be another year or so before the mania starts in gold. The mainstream won’t catch on for months, which makes it an opportune time to add your favorite names.

Define your timeline, define your risk tolerance, and speculate accordingly, but get that done now. There will not be a better time to buy and these gold prices are an absolute gift.

What The Fed Fears Most
It’s the “kick the can down the road” approach that got us into this mess in the first place. These are different times that will have different outcomes and consequences that will restructure the world order. Sounds dramatic, but the writing is on the wall.
The New Gold Bull Market
Gold has been asleep at the wheel for seven or eight years. It's about to wake up and make up for lost time. This is the storm that could take gold to $5,000...
The Marijuana Power Trio
These three companies provide you with three chances to make massive gains through marijuana investing. Outsider Club contributor Ryan Stancil shares the details inside...
Heal Your Ailing Portfolio Body