One of the most explosive bull markets in history peaked in 2011, and then precious metals were brutally slammed.

This is what happens in a commodities cycle.

Demand snowballs and suppliers overproduce, trying to make as much money as they can. The resulting oversupply overwhelms the market, and prices crater.

We see this not just with gold and silver but also with oil. Indeed, oil prices have tumbled as low as $30 twice in the past eight years. Each time they rebounded rather quickly, delivering gains of 100%, 200%, and even 300%.

The precious metals slump has been more persistent. But like oil, silver and gold are bouncing back.

The reasons why are familiar.

Mining projects have been shuttered or postponed, production is falling, and demand has been rekindled by lower prices.

Total mine output rose for six straight years through 2014, as producers ramped up to take advantage of high prices. But it plateaued in 2015, and in 2016 it is poised to suffer its first annual decline in nearly a decade.

This, ultimately, is a good thing.

What remains is a cadre of more capable miners — low-cost producers with high-quality assets. These companies have emerged with higher margins, toned balance sheets, and less competition than before.

As a result, they stand to do quite well when a new bull market gains traction.

We made special note of both of these companies back in December in our 2016 Gold Outlook. Since then, their stocks have surged. Agnico Eagle is up 94%, and OceanaGold is up 67%.

So let's take a closer look at each.

Agnico Eagle peaked at $85 per share in 2010, but at its lowest point in 2015, it was trading around $22 per share. That means Agnico Eagle lost three-quarters of its value in just five years.

It survived the worst of the bear market and has rebounded nicely since.

When we first recommended buying Agnico Eagle in December, it was trading at just $26. Since then, it's nearly doubled to its current level of $50.

Today, company has a market cap of more than $10 billion.

Its durability is on full display.

The key, of course, is Agnico's low-cost production.

The all-in sustaining cost (AISC) for Agnico is roughly $800 per ounce. That kept the company profitable and allowed it to pay down its debt, even as gold prices plunged.

In 2014, Agnico purchased a 50% stake in what was Osisko Mining's Malartic mine. This contributed to an 18% increase in reserves in 2015. 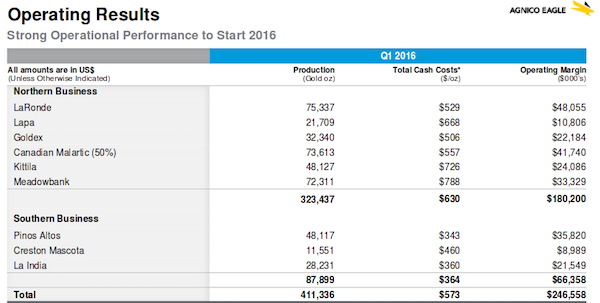 This was the fourth year in a row that operations exceeded their production targets, giving the company room to boost its guidance and lower its costs.

Furthermore, Agnico has also been one of the few mining companies increasing its exploration, doubling its budget. This resulted in the discovery of the new parallel Sisar Zone at its Kittila mine in Finland. This new find is expected to be a significant contributor to future output.

Looking ahead, average annual production from 2016 to 2018 is forecast to be approximately 1.53 million ounces of gold per year.

You don't have to be an expert to figure out what higher production and lower costs means (though it doesn't hurt if you are). It means higher cash flow.

Agnico figures to have free cash flow yield of about 4% over the next two years, which is great compared to its peers.

It's also reduced its debt, resulting in a debt-to-market cap ratio of less than 10%. That, too, is well below its competitors. 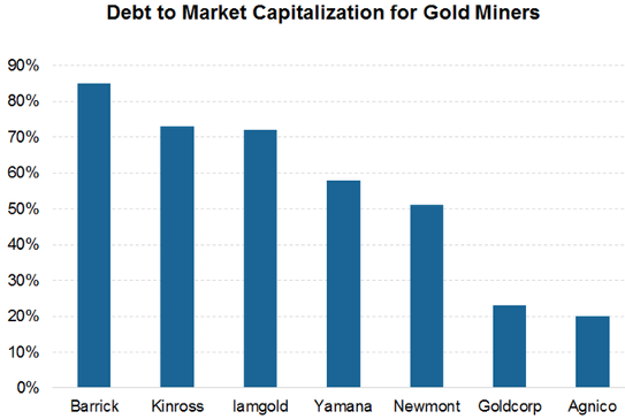 The company currently has $168 million in cash and cash equivalents and $990 million in unused credit facilities. That gives Agnico more than $1 billion in available liquidity.

As a result, the miner is well capitalized should gold and silver retrench. It also has the flexibility to acquire new mining stakes should the opportunity arise.

Agnico has been and will continue to be one of the stronger mining investments in the game.

Moving on to OceanaGold...

Oceana is an Australia-based miner that's much smaller than Agnico Eagle. But then again, so are its costs.

Indeed, 2016 is shaping up to be an even better year for Oceana.

The company reported in April that it'd hit record production in the first quarter. Total gold production came in at 122,782 ounces, with record quarterly gold production of 46,811 ounces from its Didipio mine in the Philippines.

The Waihi mine in New Zealand has performed well, too. However, it should be noted that while the gold produced at Waihi is cheap (AISC of $650 to $680), the mine is going to reach the end of its life in a couple years.

Oceana, of course, is aware of that and has taken steps to replenish its reserves. Like Agnico Eagle, Oceana took advantage of the gold price slump to absorb new assets.

The company acquired Romarco Minerals Inc. in 2015. This increased Ocean's debt burden, but not overwhelmingly so. And the takeover is expected to add attributable production of 540,000 ounces gold in 2017 at an AISC of just $533 per ounce. 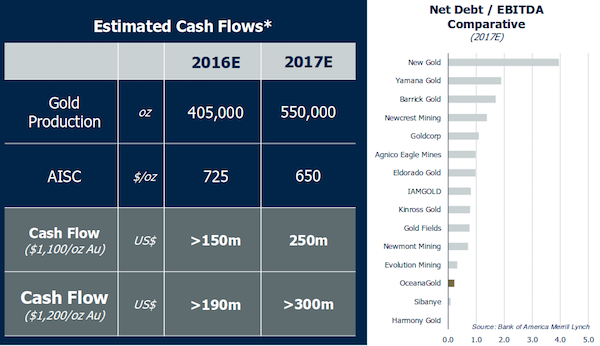 In short, OceanaGold is looking at a couple years of very strong profits, with the potential to improve long-term production at very low all-in costs through exploration and new mines.

The company is valued at about $2.5 billion, and that's with a 67% increase over the past six months.

The stock also pays a $0.05 dividend, which yields 1.24%. That's pretty good for an industry that doesn't have a lot of cash to kick back to investors at the moment.

And these are just two decent picks in the sector right now.

If you want some more ideas, you should definitely check out the Resource Stock Digest Premium.

It's run by resource expert Gerardo Del Real. I'm not ashamed to say he knows infinitely more about this space than I do.

I'm proud of the fact that Agnico Eagle and OceanaGold have delivered really strong gains since I recommended them. But honestly, those picks pale in comparison to what Gerardo can offer.

He's been advising billionaire clients in the resource space for years and has a much more nuanced understanding of the industry's intricacies.

There's plenty more to tell you. You can find out all about it here.