Get Into Gold Right Now

Just last month, I told you that “there is a good case to be made that April could be the bottom for the gold price, leading to a seasonally strong June through September.” 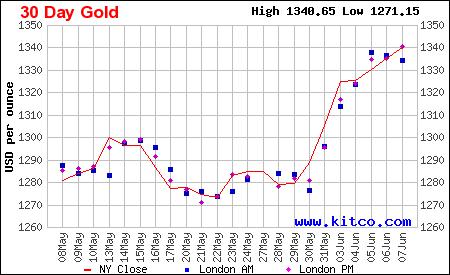 This latest rally has been met with the kind of skepticism that makes my contrarian heart smile.

Much like the bull market in the U.S. indices, very few actually believe this rally will hold. Which may be providing those of us who speculate in the junior space with the best buying opportunity in the last decade.

Remember back in April when I explained that the Fed had blinked, global growth had slowed, and that we would not only not see a rate hike but a rate cut before the end of the year?

Here’s how I saw it then:

Not only is there only one rate hike planned for 2020 — spoiler alert: it’s not going to happen — but the Fed also announced that it is tapering its Quantitative Tightening (QT) program from $50 billion per month to $15 billion per month in May. Come September, all balance sheet tightening will end.

In the words of Outsider Club founder Nick Hodge, even a blind squirrel gets a nut from time to time. In this case, this blind squirrel has found two recently.

The Fed has once again done a brilliant job of trapping itself and making the next couple of moves very predictable.

In the words of Wayne Gretzky, “you skate to where the puck is going, not where it’s at.”

So let me tell you where the puck is going.

The Fed will likely cut at least 25 basis points next month and possibly 50.

The latest jobs report added only 75,000 jobs to the U.S. economy. Expectation was 181k. That’s all the cover that the Fed will need to officially reverse course.

What was Quantitative Tightening will turn into Quantitative Easing ’til Infinity... or at least until global financial institutions are restructured.

Let me be crystal clear, the time to add your favorite gold juniors is now.

If you don’t have a list or are new to the space, what do you look for?

Look for juniors that have managed to keep a solid share structure during this bear market.

Look for juniors that are drilling and don’t need to raise money next month.

Juniors sitting around idly hoping the coming bull market saves them do not deserve your speculative capital.

Look for management teams that have been successful in past cycles, that know how to develop and monetize assets.

If company CEOs don’t believe enough in their own story, neither should you.

The bear market has done an excellent job of shining a spotlight on the better teams in the space.

Now is the time to reward those teams with your speculative dollars.