Shares of the (now) meme stock GameStop (GME) began to skyrocket for the second time this year.

You may remember the first time this happened just over a month ago. Virtually every financial media outlet — hell, even those that don’t focus too much on financials or investing — was flooded with the news of what happened.

It’s a modern-day David and Goliath story playing out before our eyes on Wall Street and the internet.

The army of Redditors populating the subreddit r/WallStreetBets is at it again, attempting to raise the price of GameStop’s stock price in a short squeeze attempt targeted at major hedge funds with big short positions against GME.

Now, let me just say that shorting GameStop isn’t a terrible idea. It’s a brick-and-mortar video game store… two business models that are on the way out thanks to online shopping and downloading video games becoming more and more popular.

But for whatever reason, this army of autists (their words not mine) “believes in the stock.”

OK, sure. I guess I could potentially buy that. After all, this Reddit army does not enlist the most seasoned veteran investors. Maybe they just don’t know any better…

And of course, you may even wonder, “What do they know that I don’t?”

Well, let’s break this situation down some more and see if there really is some money to be made here.

February 24 started off as a very lackluster day for GME.

Then GME began seeing some movement in the afternoon, culminating in a MASSIVE rally.

By the time the market opened at 9:30 the next morning, shares of GameStop were trading for $129.05. 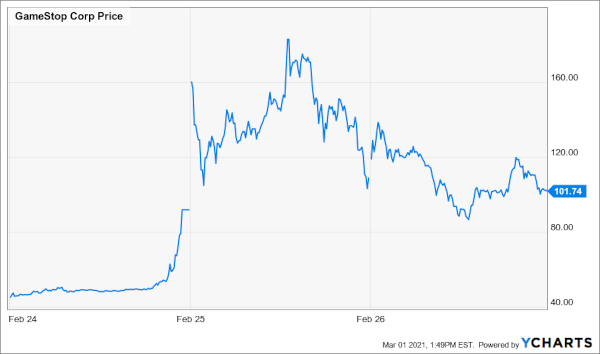 But is it sustainable? And can you make it work to your advantage?

I wish the answer was straightforward, but unfortunately it isn’t.

Is this sustainable? Frankly, I don’t think so.

These are flashes in the pan, and as with many other big Wall Street trades, if you’re not on the inside, you’re probably going to be left holding the bag.

Sure, you can lurk in these subreddits and see which stocks they’re targeting and invest accordingly.

You can purchase various call or put options, or you can invest in the stocks straight up, like many of these self-proclaimed “autists” are doing.

You can certainly make these wild stock swings work to your advantage with a slick options strategy, but that is a lot more risk than people usually realize they’re taking on.

Unless you are an options aficionado and have plenty of time to track the market, I do not recommend trying to take advantage of these swings.

I get it. FOMO (fear of missing out) is real and you may feel like you’re missing the boat big-time, but I can assure you there are plenty of other boats that are much bigger, with far fewer passengers on board.

Feeling frustrated about missing out is completely understandable. I feel that way all the time.

I have often looked back at missed gains and kicked myself over not acting.

But ultimately, that doesn’t help.

Sure, it's good to learn from your mistakes, and you should try to figure out what went wrong with your poor trades or missed opportunities, but in the end, dwelling on past failures does more harm than good.

The best thing you can do is learn from your mistake and start finding the next company you’re going to add to your portfolio.

There is another sector that the Reddit army began to target amid all of the mayhem, and I'll be honest...

This time, if they say they “believe in the stock” or sector, I’m much more inclined to believe them.

The truth is, this sector is in its infant stages.

To put it another way, this is a MASSIVE boat and it is nowhere near close to capacity.

In addition to meme stocks such as GameStop, AMC Theatres, Churchill Capital, Nokia, and BlackBerry, the Reddit army had another set of stocks fixed on their map.

But it's a little more lucrative than meme stocks.

Among the first wave of attacks from the Reddit army was a calculated move to get into certain weed stocks.

On February 10, 2021, the Reddit army began to target the cannabis sector, and people started to notice.

But like the GameStop party, the fun was short-lived.

Just a day later, the profits that emerged seemingly out of thin air disappeared almost as quickly as they came.

So if you want to try to time some Reddit trades — which, for the record, I DO NOT RECOMMEND — you might want to start to pay attention to the cannabis sector.

If GameStop and these other meme stocks are beginning to pick up momentum, then I’m willing to bet that certain weed stocks could see another bump as well.

Now, I can’t stress this enough...

I really don’t think hopping in on this bandwagon is a good idea.

As I said before, if you’re not already on the inside (or in this case, Reddit user DeepF---ingValue), then chances are you'll be left holding the bag.

I personally know a few bag holders (who ignored my two cents to leave it alone).

I really hate to see it happen to people like myself. We’re in the market to make our money work for us, not to get swindled out of our hard-earned dollars.

I hope that’s why you read these pages: because you appreciate our unique insight and realize that our market commentary is backed by due diligence and many years of experience in the market.

Yeah, making a quick buck is nice (aside from getting raked through the coals on capital gains taxes), and we’re not against that at all.

But there are some risks worth taking and others that are best just left alone.

Now, I’m not saying there isn’t money to be made by getting in on these momentous trades; I’m just saying that I know there is a much better and way less risky way to do it.

If you’re looking to make substantial gains when it comes to the cannabis sector (or just gains in the market in general), then I highly suggest you check out Jimmy Mengel’s premium investment service The Crow's Nest.

Jimmy saw the potential of cannabis stocks far before the Reddit crowd and all of the other mainstream bigwigs who jumped on the pot-stock bandwagon back in 2016/2017.

Jimmy had been telling The Crow’s Nest readers for years to buy a (back then) little-known company called Canopy Growth Corp.

Readers who listened were treated to life-changing gains. 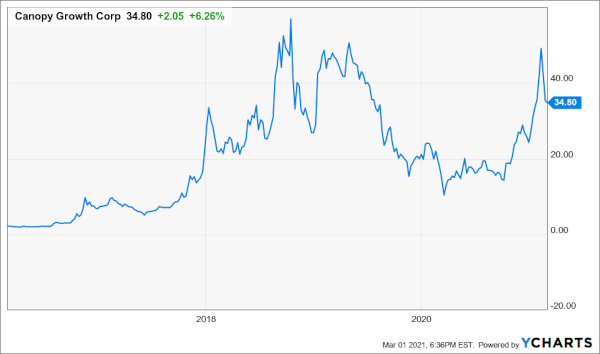 When all was said and done, Jimmy’s readers who listened early enough walked away with quadruple-bagger gains (as in 1,000%–9,000%), with the potential to go even higher.

Remember how I said I personally knew a few bag holders of the Reddit fiasco?

Well, I also personally know some other readers of Jimmy’s who took his advice and turned their $10,000 investments into six figures.

One of them even paid off his mortgage!

YOU DID NOT MISS THE BOAT.

As I mentioned earlier, there is still plenty of room aboard.

And while I still believe Canopy is a solid company and has more room to grow, it’s not the weed stock I’m talking about...

Jimmy was telling me about a cannabis stock that he thinks has the same breakout potential as Canopy did back in 2017, and I want to tell you all about it, but I don’t want to butcher the details.

Luckily, Jimmy has put together a presentation that you can check out for yourself so you can get it straight from the horse's mouth.

Check out the next breakout weed stock right here now.