Founder and President: "We Will Not Comply"

In 2006, I hired a young dude who had just graduated from a large Midwestern university.

I actually didn’t personally hire him but gave the go-ahead to one of our editors who was looking for an assistant to groom (when the term "grooming" was still benign).

Everyone told me he was “the smartest guy in the room.”

Like I said, he was fresh out of college and starting a career far from home. So he seemed ambitious. He was incredibly book-smart. But the worse thing that could ever happen to a promising open mind happened to him: He had been indoctrinated by the public school system and then at the university.

We soon figured out he was brain-numbingly liberal, which made him maddeningly naive about how the real world works. He was dangerously idealistic — an early ancestor of the species "Wokest dumbest."

During the COVID-19 episode of the last two years, they were referred to as Karens or Kens on social media. They would shame you or even get violent if they perceived you were not complying with the rules and mandates. These were the ones who told you “you’re not wearing your mask properly.”

My 2006 hire didn’t want to make money for my company, but he sure did love spending it.

But here’s where he got downright scary:

He once asked me a question that I still remember to this day — a question that revealed the sociopathic leanings of his generation’s Marxist, anti-capitalist ambitions.

He asked me something like this: “What do you want out of life?

I wasn’t sure if he was trying to shame me for owning a business (something he often did), so I punted and simply replied, “I just want to be left alone. Cool?”

His response made the hair stand up on the back of my neck. He said with a lifeless expression, “We can’t leave you alone.”

I would later find out all too well.

For the last several years, they’ve been telling us about the life-changing plans they have for us… and it’s coming sooner than you think. It’s nothing short of absolute control of your life. Everything. They even use the words “absolute control.”

This is the “Big Control and Compliance Complex.” Sarcastically, you can call it “Aunt Karen” for short.

And guess what? Wall Street is also fully on board with this shit too. They know there are hundreds of billions of dollars — if not trillions — to be made off of the gullible and compliant, popularly referred to as sheep or lemmings.

They’re control nuts of the highest order, believing they know what’s better for you than you do. They believe — with all the characteristics, veracity, and self-delusions of a cult — that they’re the smartest, most important people on the planet.

They even have their own 10 commandments and blasphemy laws. Follow their orders, or go to hell (get canceled).

CNBC and Google said it was a “starter version” to help companies of all sizes measure their carbon footprint and make changes immediately and accordingly.

This past March, the carbon calculator went live for the first time.

Then at the 2022 Davos Forum just last month — a meeting of the most self-absorbed narcissists and control freaks on the planet — Alibaba Group President J. Michael Evans said these exact words:

We’re developing through technology an ability for consumers to measure their own carbon footprint.

“What does that mean?” Evans asked rhetorically.

He dubbed it an “individual carbon footprint tracker.”

Of course, this begs the question: Who’s doing the tracking and how will they use the data they collect?

Imagine being told you can’t take a summer vacation because you already exceeded your carbon limit for the year.

So it went from tracking companies' carbon footprints to tracking you — all in the space of less than a year.

And remember that Alibaba is a Chinese company, a nation where hundreds of millions of residents have been unable to leave their homes for weeks on end in a brutal government crackdown to achieve its zero-COVID policy. 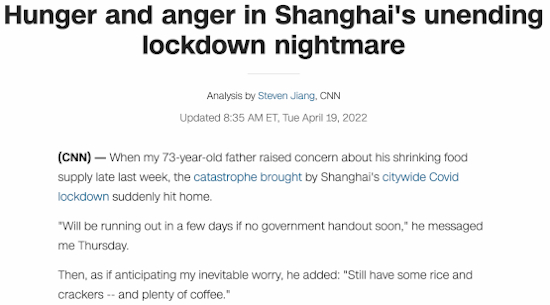 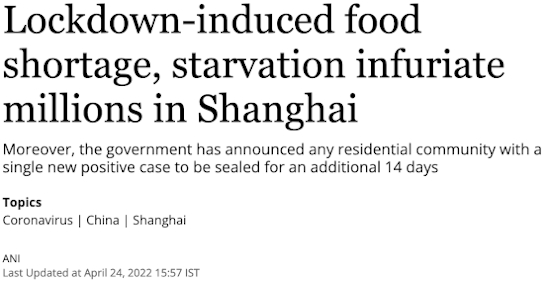 China’s government is softening the population for even more crazy population control policies. China started its social credit score system in the early 2000s. And now Western nations are looking into plans for similar programs to score citizens on an ESG scale (environment, sustainability, and governance).

If you don’t comply with the control freaks’ opinion of what a “good citizen” is, your social credit score drops. Even worse, you might get sent to a re-education camp.

If you think something like that couldn’t happen here, think

again. There’s a large segment of the U.S. population just salivating at the idea of forcing you to do things you don’t want to do. If you refuse to comply with their demands, you’ll be locked inside your own home or, worse yet, thrown in prison and left to rot until you get your mind right.

According to Aspiration & Inertia, a January 2022 Rasmussen poll found the following:

Now switch that to climate change.

There’s already talk that the COVID lockdowns reduced carbon emissions. Could climate lockdowns be next?

According to a Forbes report on March 3, 2021, the world needs the equivalent of a COVID lockdown every two years to bring down carbon emissions.

Remember at the beginning of pandemic when the “experts” warned us that cash could carry and spread the coronavirus… and how your local Dunkin and Starbucks started asking customers to pay with credit cards only?

And there are now companies planning to issue carbon-tracking credit cards.

In 2018, a company called Doconomy did exactly that. Its credit card tracks the CO2 emissions generated from the products you buy and then displays that data through an app on your smartphone. It could be gas, clothes, or even the food you eat. It shows you the purchase price of a product with the effect on the planet measured in KgCO2 and then allows you to offset it.

And since then, Mastercard, Aspiration, South Pole, and Visa have launched similar cards. Other credit card companies are planning to do the same.

You can’t do this with cash. If you fill up your Jeep Wrangler with cash, the transaction isn’t trackable.

Of course, it’s voluntary to use the carbon-tracking credit card, much like it was voluntary to wear a mask and stay home at the beginning of the COVID pandemic. Then it became mandatory.

That’s why they wrap their “absolute control” plans in alarmist and fearmongering phrases like:

Do they want to leave you alone? Nope.

And this isn’t even half of what they have in mind for us. They want to take your physical dollars and replace them with a federal digital dollar (a government-controlled cryptocurrency) that can be tracked and controlled much like the individual carbon-tracking credit cards.

The Aunt Karens also want everyone to have a digital ID that stores all of your health records, wealth, and other personal information. The digital ID will be connected to your digital dollars with a biometric scan of your personal features.

A few years ago, India launched its own version of a digital ID system with disastrous results. People starved because they couldn’t get food, water, and medicine without the digital ID.

Are you starting to get the picture?

All of this can only be accomplished if the masses submit to the commands and demands of the Aunt Karens. They want to hack your life. They want your valuable assets.

But we will never comply.

And we know there are people out there like us… who want to protect their privacy and hard-earned wealth.

In the coming weeks, we will give you concrete, actionable advice on how to build a wealth and privacy fortress around your assets — including your gold, silver, real estate, and even your physical cash. One method is to convert U.S. dollars into other fiat currencies, in addition to cryptocurrencies.

We will also show you the very best stocks Wall Street doesn’t and will never touch — not because it thinks they’re bad investments but because it can’t earn millions of dollars in commissions and fees off of you.

Owning these stocks is one way to protect your investments from these thieves.

In fact, we have built a proprietary method of selecting these stocks… a screener that literally eliminates Wall Street and its greedy tricksters.

So say it with me…

We will never comply.

Thanks, and always a pleasure to be amongst friends,

Brian is a founding member and President of Angel Publishing. He writes about general investment strategies for Wealth Daily and Energy & Capital. For more on Brian, take a look at his editor's page.