Forgive Us: We Can't Accept Your Payment

I thought I’d treat myself to some Chipotle last night for dinner.

“Treat” is a strong word, as I generally have unpleasant experiences there — how can a multibillion-dollar corporation always be out of sour cream... and literally every other food item?

We all remember what happened during the pandemic... 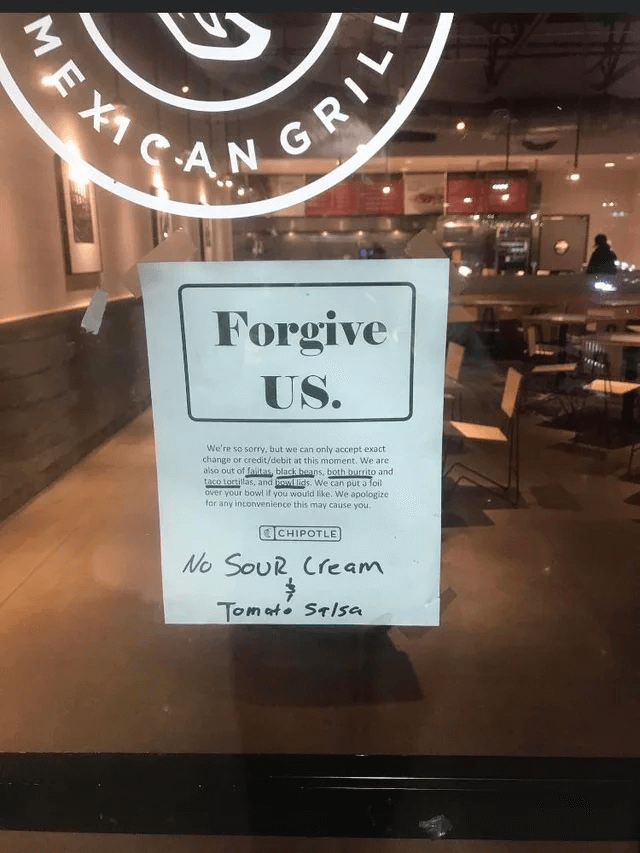 But sometimes you just crave that Chipotle taste, which is why the stock’s worth an insane $1,300 a share.

Anyway, I walked into the store and stood in line like a good customer.

There was a family ahead of me and a few people sitting in chairs not eating anything, seemingly waiting for their orders.

I looked around and noticed the workers behind the counter were making to-go orders, as they were grabbing printed receipts and not taking the order of the family in front of me.

The staff kept calling out the names of customers and people kept coming in and grabbing their food.

I didn’t really think anything of it, but after about 10 minutes, the staff called the family’s name and they took their food and left.

At this point, it was just me and someone else behind me in line.

Naturally, I walked up to the counter to order, but I couldn't...

The employee told me they were “online only,” directing me to the small sign they had posted on the counter that had been obscured by the family in front of me.

When the man behind me asked why, she said she was the only person working the line.

We were a bit shocked that the restaurant wouldn’t just take our orders face-to-face.

At first glance, it’s not that big a deal.

But as I started to think about it more, it made me wonder what the world would look like if every business was run like this and every transaction was performed online.

No cash, no card, just your phone.

Is this where we’re headed?

Isn’t Chipotle a kind of barometer for the state of the country?

It was one of the first companies to go “cashless.”

It was directly and detrimentally affected by the recent supply chain mess and food shortages.

Inflation caused it to raise prices.

And now it's testing the population for what it can get away with...

At the end of 2021, it opened a digital-only store concept in Ohio called Chipotlane Digital Kitchen... 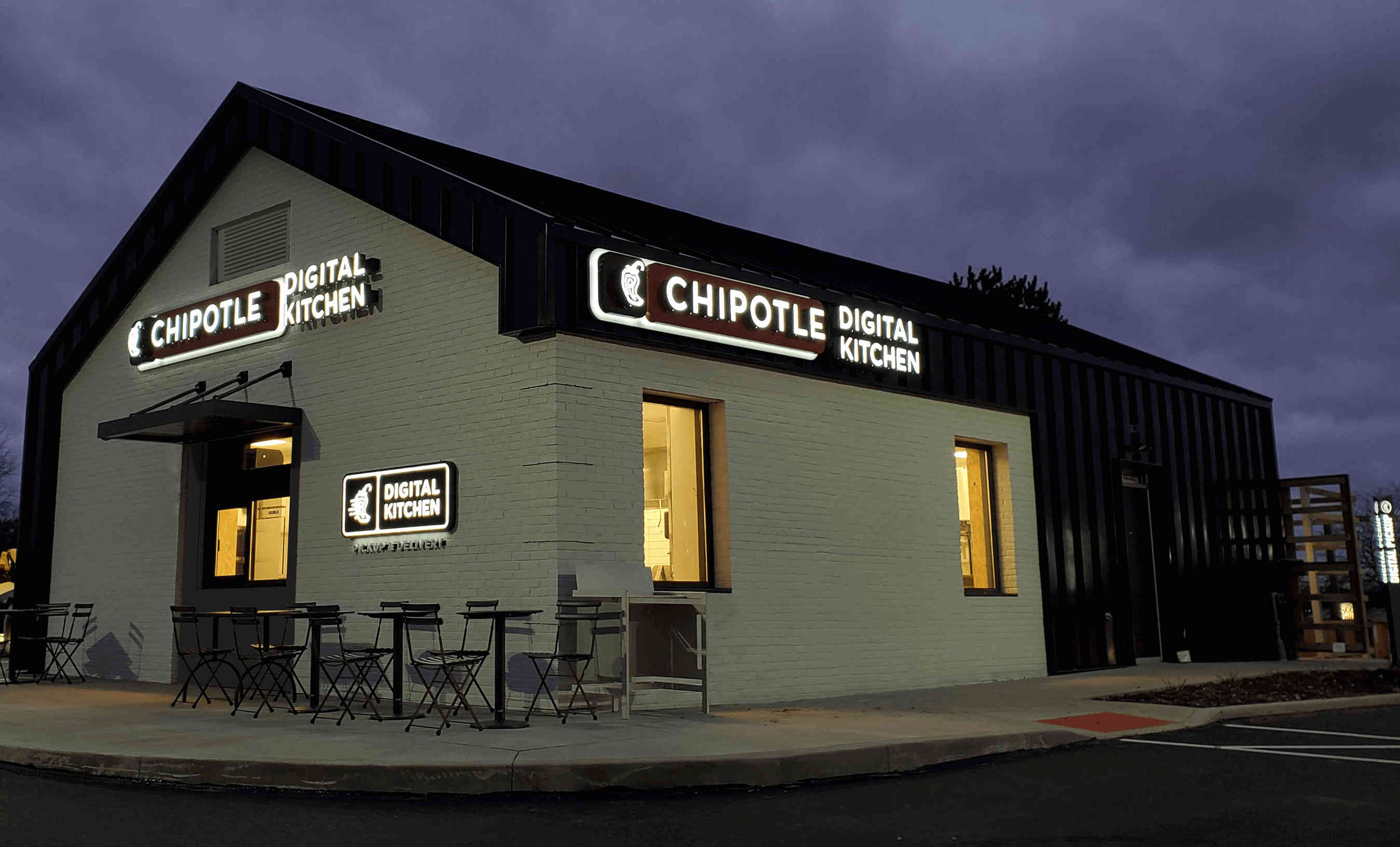 So it shows that a) people don’t carry cash, and b) everyone’s ordering food online.

But the problems with this are obvious.

The first problem is it limits human interaction.

Believe it or not, it’s healthy for humans to interact with other humans.

I worked at a park store for my first job, and the experiences I got cannot be replaced.

Learning people’s quirks, making small talk, MAKING CHANGE — probably one the best skills to have in any business.

The second problem is it prices people out of the market who don’t have the internet.

What happens if you don’t have a phone?

What if you don’t have the internet?

We’ve come to accept these services as the standard way of life, and companies like Chipotle are using that to profit from us.

According to the FCC, approximately 100 million Americans don’t have internet access.

Are you going to tell them they can’t order a sloppy subpar rice-and-bean burrito by handing you a $10 bill?

And how is ordering online any different from just walking into a store, pulling out your phone, and ordering in front of the counter?

The short answer is it’s not, which is why customers were waiting in the store and in the parking lot for their food after ordering on their phones, causing a confusing scene.

Readers, shoot us an email if you’ve experienced this.

We’d love to hear from you.

The third problem is that switching to an all-online platform opens the door for security issues.

What happens if the system gets hacked, or the power goes out, or the Wi-Fi is down?

No food, no business.

The real kicker is this doesn’t end at Chipotle.

Imagine you can only pay for things online...

No more cash, no more checks.

It’s the only way to perform a transaction.

And when problems arise, as they inevitably will, the government will have to step in and regulate all digital transactions.

This is what crypto was supposed to prevent, but as we’ve seen, greed clouds the judgment of even the brightest minds.

It’s similar to what’s happening in the investing world as well.

A lot of people just don’t have access to it.

That’s why I like to look deep inside companies to see who's making money off them.

For example, company insiders are always trying to make money off their own stocks.

Over at Chipotle, director Gregg Engles made some good stock purchases, buying in last year for an average price of $1,294.

He was sitting on a 35% gain just a few months later.

Two sectors in which we see a lot of insider buying are health care and biotech.

A company will often have an FDA approval coming up or a big announcement about a new drug or director and the stock will skyrocket, leaving everyone wondering how it happened and how they didn’t know about it.

Bali got in at $0.19 back in May, and when a new director was appointed at the end of December, shares skyrocketed 42% month over month. 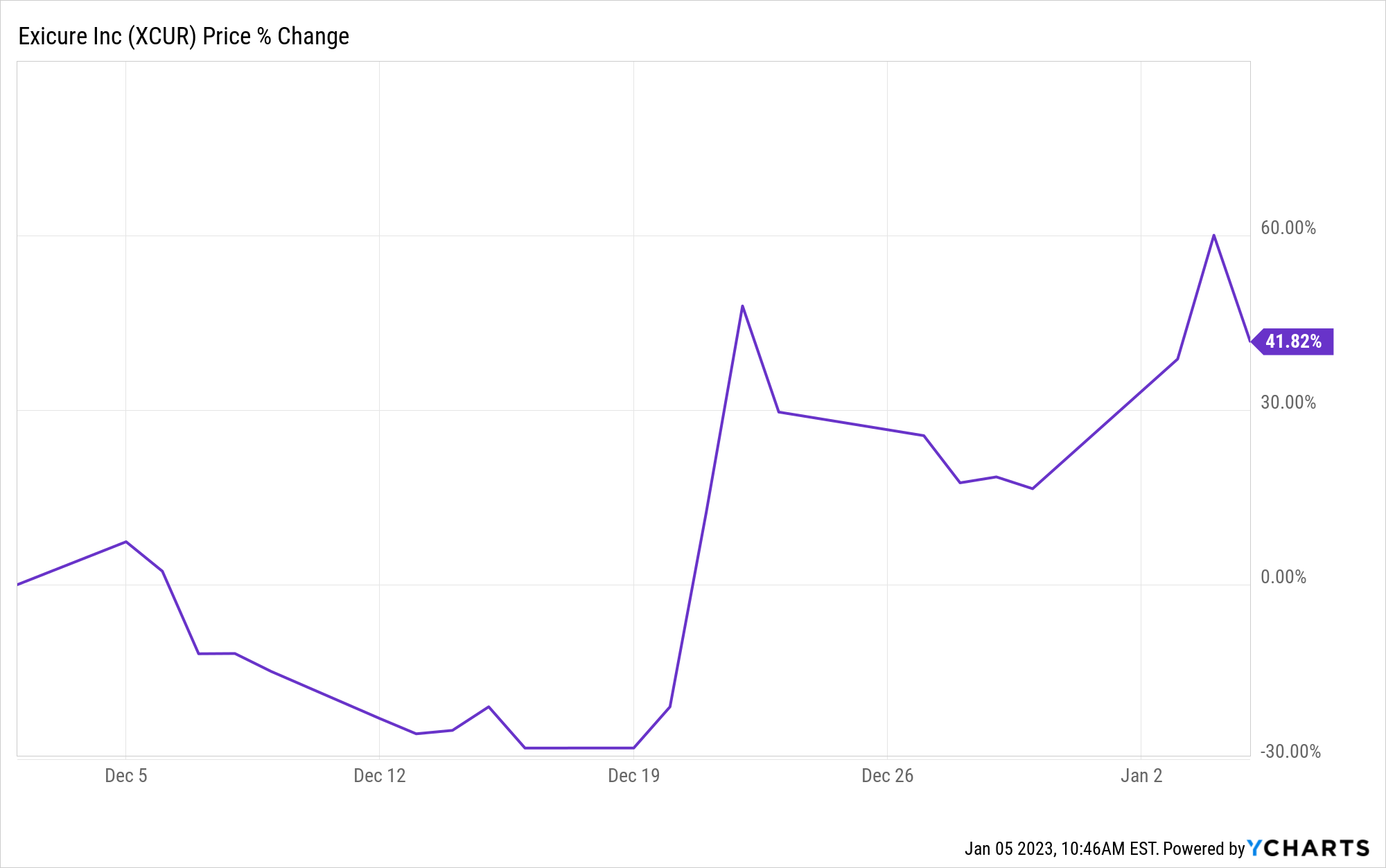 Another example is Summit Therapeutics (NASDAQ: SMMT), which is a biopharmaceutical company specializing in infectious diseases.

In something referred to as cluster buying, where multiple insiders buy at the same time, on August 16, CEO Robert Duggan, President Maky Zanganeh, and CFO Ankur Dhingra all bought shares for $0.97 on the dollar.

Combined, their purchases were worth nearly $100 million.

After a licensing agreement for a cancer program was announced at the beginning of December, shares soared, up 522% month over month. 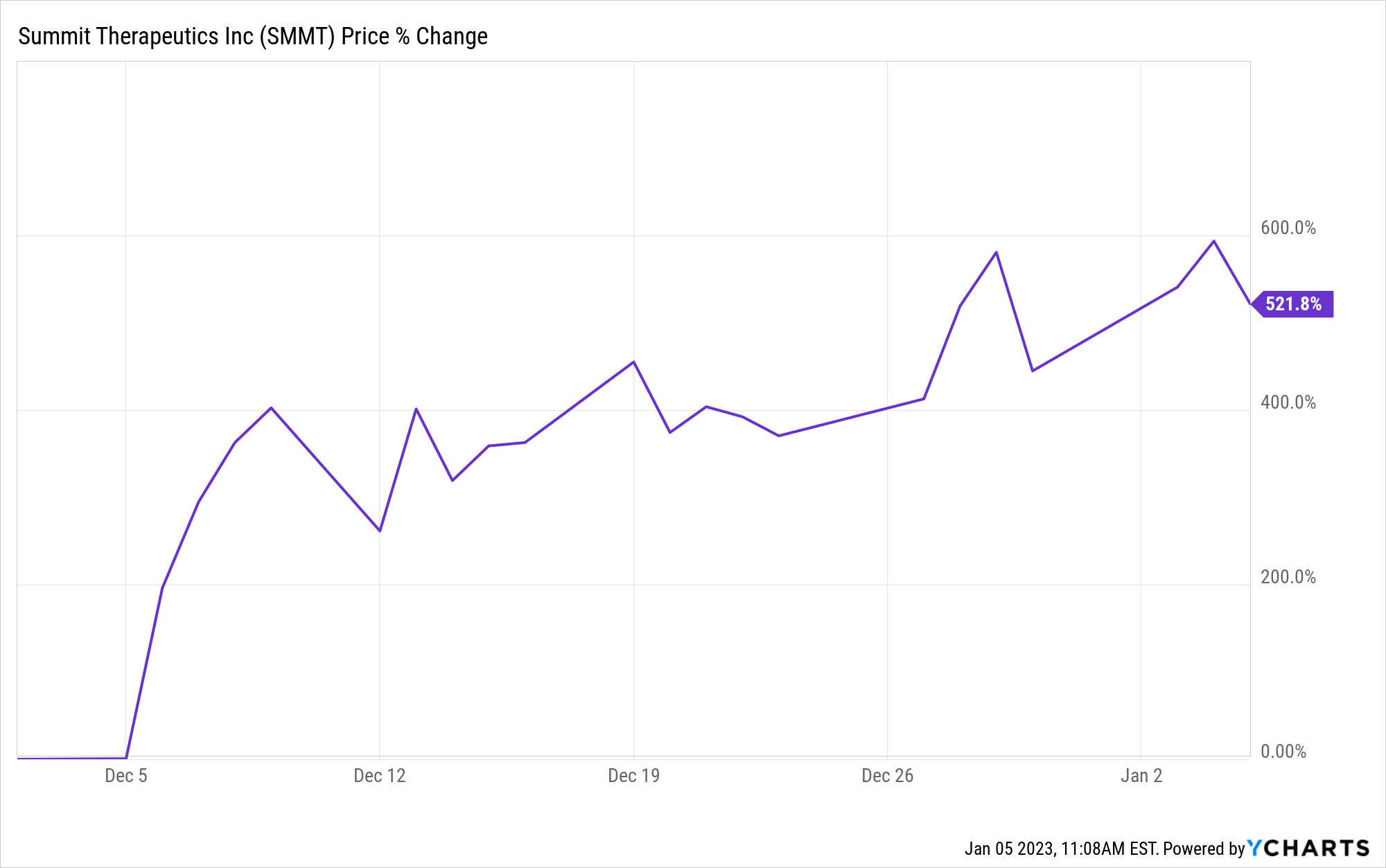 This is how millionaires are made every day in the market.