Gold continues to show resiliency and added approximately 2.4% for the week closing — while hitting 11-week highs on Thursday — near the $1,221 level.

The price of gold and the dollar, which often move in opposite directions, went back and forth all week long with the dollar index — which closed down approximately 1% for the week — bouncing above and below the critical 100 level.

The Fed did its usual double talk stating that it doesn’t feel pressured to raise rates aggressively while also maintaining guidance for three rate hikes this year.

Uranium continues to make its case that the bottom is in. It closed above the $25/lb. level for the first time this year with many of the quality juniors posting new highs.

The Week in Juniors

On February 1, 2017 Aurion Resources announced it had discovered a new bonanza gold zone at its 100%-owned Risti project in Northern Finland.

An 1150 m long by 700m wide area of gold mineralization with an apparent NE-SW trend was recently discovered by Aurion prospectors.
Here, 133 rock grab samples collected from predominantly large and angular sub-cropping quartz-tourmaline blocks assayed from nil to 1563.5 g/t Au, including 36 samples which assayed greater than 31 g/t Au (1 ounce per tonne). The average grade of all 133 samples is 74.3 g/t Au. 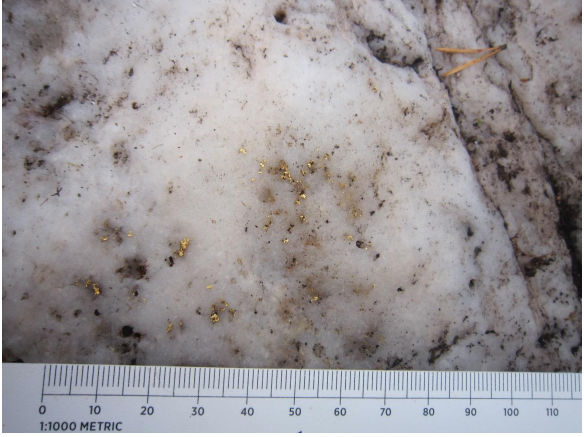 Many of these samples contain abundant coarse visible gold. Numerous quartz blocks within this trend are > 1 m in at least one dimension and locally reach up to 3.5 m by 3 m by 1 m in size.

The Aurora Zone lies within a broader area of approximately 2.3 km by 3.0 km hosting multiple quartz-tourmaline-Fe-Oxide veins, breccias and stockworks outlined in outcrop, sub outcrop and angular boulders. A total of 525 rock grab samples from this area and including the Aurora Zone have assayed from nil to 1563.5 g/t Au. The average assay of all samples is 21.0 g/t Au. 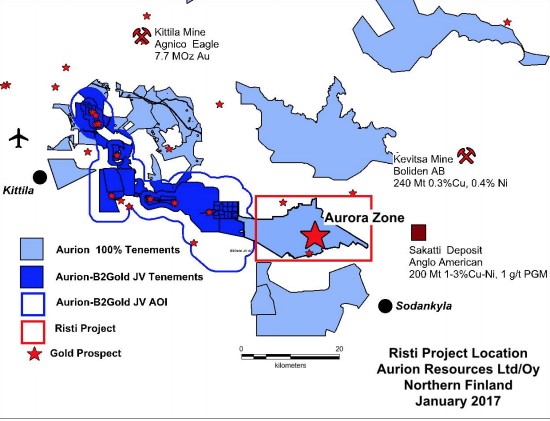 The company has approximately 55 million shares outstanding and a market cap of approximately C$57 million. I’ll be watching this drill program closely.

On February 2, 2017 Gold Standard Ventures announced a US$15.5 million 2017 exploration program for its Railroad-pinion project in the Carlin Trend Nevada.

The announcement outlined the 2017 goals, which include:

(2) drilling to expand known resources at Dark Star and Pinion; and

"Railroad-Pinion has now become a truly district-scale play with multiple deposits of different types. Each year, we set out to find the limits of the gold systems we have discovered and each year we end up with new opportunities that exceed our expectations. We think 2017 will be no different. We believe we have found the right balance between expanding and advancing resources at known deposits and continuing to evaluate the many new targets that have emerged over the past year. This should be a very exciting next few months.”

"This aggressive 2017 exploration program will follow up on our great success in 2016 by continuing to expand our oxide gold resources at Pinion and Dark Star, and offsetting open high-grade gold intercepts at North Bullion. We will also complete our folio-style, detailed geologic work to define and test new targets throughout our large land position, including targets along the Dark Star corridor, Ski Track corridor and Pinion thrust (a newly recognized geologic connection between Pinion and Dark Star). With this well-funded, systematic exploration program in place, we are looking forward to our next big discovery in the Railroad-Pinion district.”

I expect 2017 could be the year for an increase in M&A and this drill program could be the catalyst that makes or breaks the case for Gold Standard Ventures.

Speaking of M&A, on February 1, 2017 Sandstorm Gold announced it had told Luna Gold and JDL Gold to merge. They didn’t use the word “told” but it sure looks like they were told.

The new company will be well-funded with approximately US$50 million in cash and no cash debt.

The focus of the new company will be getting the Aurizona gold project into production. Sandstorm holds a 3% to 5% sliding scale net smelter returns royalty on Aurizona and at gold prices less than or equal to $1,500 per ounce, the royalty is a 3% NSR.

The Aurizona Project is located in northeastern Brazil and produced gold from 2010 until late 2015 when it was placed on care and maintenance.

In addition to the sliding scale royalty on Aurizona, Sandstorm holds a 2% NSR royalty on greenfields properties owned by Luna Gold. The greenfields exploration ground happens to be in proximity to the Aurizona Project.

In addition, the US$20 million owed to Sandstorm from Luna will be settled in equity or a combination of cash and equity of Trek Mining.

“As a material stakeholder in Luna, we are pleased with the proposed merger between Luna Gold and JDL and we fully support the proposal."

Sandstorm is pleased, JDL and Luna Gold did not comment. Nobody likes being told.

On February 2, 2017 Zinc One and Forrester Metals announced their plans on Zinc One acquiring all of the issued and outstanding common shares of Forrester and will complete a private placement financing of $10,000,000.

The proceeds from the private placement will be used for exploration on the high-grade zinc Bongara and Charlotte Bongara properties — in Peru — and for general working capital purposes.

"We believe that this transaction is a tremendous step in moving Zinc One towards becoming a zinc producer.  Although there are other quality assets in Forrester, it is the high-grade zinc Bongara and Charlotte Bongara properties which will become the flagship project of Zinc One. This is an exciting opportunity for Zinc One and all its shareholders.”

Below are the highlights of the transaction as described in the release:

Forrester will receive 1 common share of Zinc One for every 5.5 common shares of Forrester.

Assuming completion, exercise of all convertible securities of Forrester and completion of the debt settlement, Zinc One will issue a total of 30,855,273 Zinc One Shares to the shareholders of Forrester.

Following the completion of the Transaction and the Debt Settlement, Zinc One will have issued and outstanding shares of up to 87,630,513 Zinc One Shares.

All outstanding options, warrants and convertible debentures of Forrester will remain outstanding (if not exercised prior to closing of the Transaction) and will be adjusted to give effect to the Transaction in accordance with their respective terms or pursuant to the Agreement.

Prior to closing of the Transaction, Forrester will be permitted to issue up to 27,040,000 Forrester Shares at a deemed price of $0.125 per share to settle outstanding indebtedness of approximately $3,380,000.

The Transaction will require the approval by at least 66 2/3% of the votes cast on the special resolution by Forrester shareholders and, if required, Zinc One shareholders present in person or represented by proxy at the shareholder meetings.

Sounds like two companies that actually agreed to merge to take advantage of the current and projected zinc price and supply-demand fundamentals.

It’s good to see M&A starting to ramp up. I’m still not convinced that this latest gold rally — still calling it the great head fake — won’t see one last significant leg down but I would love to be wrong.

Either way, this is an ideal time to position yourself in the buyouts of the future and in the companies making and working to make the next great discoveries. Discoveries that the majors and mid-tiers have stopped trying to make.

U.S. Pure Carbon Production: 0%
A critical resource for 21st century energy demand is seeing demand soar. Will pure carbon supply be able to keep pace with the demand?
“Uranium Price Has to Rise,” Says ‘Outsider’ Investor Nick Hodge
Outsider Club Founder, President, and “jaded” investor Nick Hodge likes tangible assets. In this interview with SmallCapPower at the Vancouver Resource Investment Conference 2017, Mr. Hodge explains why he’s bullish on the uranium price and how he parlayed his knowledge into some triple, and even quadruple-digit, winners in the past year.
The Problem With Pure Carbon
Over the past couple of weeks we’ve talked about the huge investment potential of “Pure Carbon.” It’s big. Let there be no doubt about that. The demand is huge and it’s growing fast. But there is a problem, and that’s supply.
Investing in Marijuana Without Getting Burned
The marijuana industry has rewarded scores of investors with life-changing gains.